“I did not have sexual relations with that woman.”

“We were not trading arms for hostages.”

Politicians are professional liars. They do it every day. And they usually do it without any consequences.

But the lies would all come back to haunt and humble them.

And the Iran-Contra scandal forced Reagan to apologize on national TV.

The Iran-Contra scandal showed that a strange series of events in a small, obscure, and impoverished country could come back to humiliate the most powerful person in the world.

That country was Nicaragua, and I was recently there to see it firsthand.

The Iran-Contra scandal involved senior members of the Reagan administration who secretly facilitated the sale of arms to Iran, which was fighting a brutal war with Saddam Hussein’s Iraq.

Reagan’s administration hoped selling arms to Iran would help secure the release of U.S. hostages being held by Iranian allies in Lebanon. It would also provide a stash of off-the-books funds to fund covert mischief.

The Iranian hostage crisis was still fresh in the public mind. Like a bull that sees the color red, the American public raged at anything to do with Iran. Many found the idea of sending arms to the country to be outrageous. Even to this day, many Americans get angry at the mere mention of the country.

But if they knew the real history of the reasons behind Iran’s 1979 Islamic Revolution—namely the CIA’s overthrow of a secular nationalist in the 1950s and installing an authoritarian client regime—they may see things differently.

The Real Story Behind Iran-Contra

In defiance of Congress, the Reagan administration used the proceeds from the arms sales to Iran to secretly fund a guerilla war in Nicaragua. The rebel fighters were known as the Contras (from the Spanish word for counter-revolutionary, contrarrevolucionario).

At the time, the Sandinistas, a group of communist fighters, had just thrown out a U.S. backed dictatorship. The U.S. tried to salvage its influence in the country by backing the Contras for most of the 1980s.

Ortega has never been very friendly with the U.S. Washington supported the dictatorship he helped overthrow in the late 1970s. Washington also supported an armed insurgency against his rule. Plus, the Sandinistas had a political alliance with Castro’s Cuba and Chavez’s Venezuela, both foes of the U.S.

Ortega also took lots of controversial actions while in power. He nationalized businesses, took land from some and gave it to others, and redistributed wealth.

Because of this, the average American perceives Nicaragua to be a dirt poor, crime-ridden, war torn country with a hostile regime. The country has considerable psychological baggage.

As a contrarian, that perception gap is exactly what I like to see.

Nicaragua is actually quite safe. It has the lowest homicide rate in the region. I didn’t feel threatened there at all. There were plenty of tourists and retired expats walking the streets comfortably.

The land and wealth distribution is ancient history. The Ortega of today is not the Ortega of the 1970s with revolutionary fervor. There is an appreciation of property rights. Foreign investors have been putting money into the country since the end of the conflict with no issues.

The Panama Canal Almost Ended Up in Nicaragua

You’ve probably never heard of the Nicaragua Canal. That’s because it doesn’t exist…

But you probably do know of the Panama Canal. Just ten years before it was built, the U.S. had seriously considered building it through Nicaragua instead. In the spring of 1902, the Nicaragua Canal plan seemed sure to get approval by Congress.

But it all came undone with a postage stamp…

Supporters of the Panama Canal didn’t want a rival canal in Nicaragua. They argued that Nicaragua was prone to earthquakes and volcanos. As a last ditch effort, they pointed to the fact that the Nicaraguans even featured an erupting volcano on their own postage stamps.

The lobbyists sent a stamp to each senator in Washington DC. They included a note that suggested the stamp was evidence that building a canal in Nicaragua was too risky because of violent natural disasters. 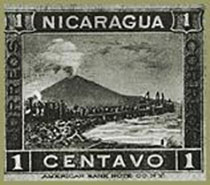 The ploy worked. Panama beat out Nicaragua by a narrow vote. A U.S. effort to build a Nicaragua canal was dead.

But the U.S. government didn’t want any other country building a Nicaragua canal. A second canal in nearby Nicaragua would dilute the value of one of the U.S.’s most prized geopolitical assets.

The U.S. even sent troops to Nicaragua in 1912 to make sure there would be no canal built there.

But as is always the case, military interventions birth unintended consequences.

That’s where the name of Daniel Ortega’s Sandinistas—who irritate Washington to this day—came from.

The U.S. government ordered a withdrawal in 1933 after the financial pinch of the Great Depression and increased pressure from Sandino's Nicaraguan guerrillas. Despite that, a Nicaraguan Canal never made it past the drawing board for one reason or another.

That is, until now…

The Chinese are poised to break ground on building a Nicaraguan Canal later this year. It’s the very outcome that the U.S. had desperately wanted to avoid over a hundred years ago. If all goes to plan, China will finish the Nicaraguan Canal by the mid-2020s.

Their success is far from certain. But it does illustrate what I believe to be the most important geopolitical trend for the next 10 years…

But China is building a new international system…and it doesn’t need to ask Washington for permission.

The focal point of this monumental trend is the New Silk Road Project.

And it’s not going to be good for the U.S. It will help dethrone the dollar as the world’s reserve currency.

Most people don’t realize it, but that would cause the dollar to collapse. It would cause a financial hurricane of historic proportions.

And just like Hurricane Katrina devastated thousands of families, this financial storm could erase a big part of your life savings.

This threat is even bigger than a stock market crash. It has the potential to strike 401(k)s, IRAs, pensions, and the Social Security system, in a much more severe way than 2008.

It won’t just impact millions of Americans’ financial future—it could alter the fabric of our society…forever.

Meanwhile, Fox, CNN, and everyone else in the mainstream media are distracted by the presidential race.

That’s why New York Times best-selling author Doug Casey and I put together a video showing you how to survive this coming financial hurricane… Click here to watch it now.