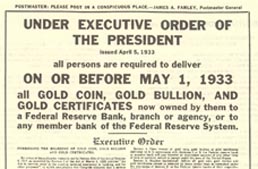 The advancing “Precious Metal Purchasing Act” in Illinois is a scary (but totally predictable) development for American owners or would-be owners of precious metals. The story gained traction on CNBC last week when Rick Santelli said “they want an audit trail to any precious metals.”

The bill will require the registration and tracking of precious metals transactions, and restricts the use of cash. It is expected to easily pass with the Democratic supermajority now in place in the state. We will be monitoring this closely and won’t be surprised to see other states follow suit.

This is the kind of stuff that all governments do when they become financially desperate.

Registering precious metals transactions could be used for many nefarious purposes including potential confiscation. Let’s not forget the historical precedent for this in 1933, the year that US President FDR issued an Executive Order to confiscate the gold of the American people. It was subsequently forbidden for Americans to own monetary gold for nearly 41 years.

The “Precious Metal Purchasing Act” is just another example of a disturbing trend from meddlesome bureaucrats. There is no doubt we will see similar and escalating measures worldwide.

Fortunately the window is still open for you to take action now to diversify internationally, and thus reduce your exposure to the edicts of bureaucrats in any country.

International Man will show you how.

Sign up here to join the International Man community for free and get the IM Communiqué delivered to your inbox.

You’ll find this story and other current events you need to know about below.

Also, new IM articles include Doug Casey’s take on some of the best regions of the world for international diversification, as well as an article by Jeff Thomas on Krugman’s ridiculous space alien proposal for the economy (Krugman is obviously unaware of the broken window fallacy).

Over time, every fiat currency ever created has failed and always for the same reason…

Tax Loss Season: What Does the Broken Clock Setup Look Like?