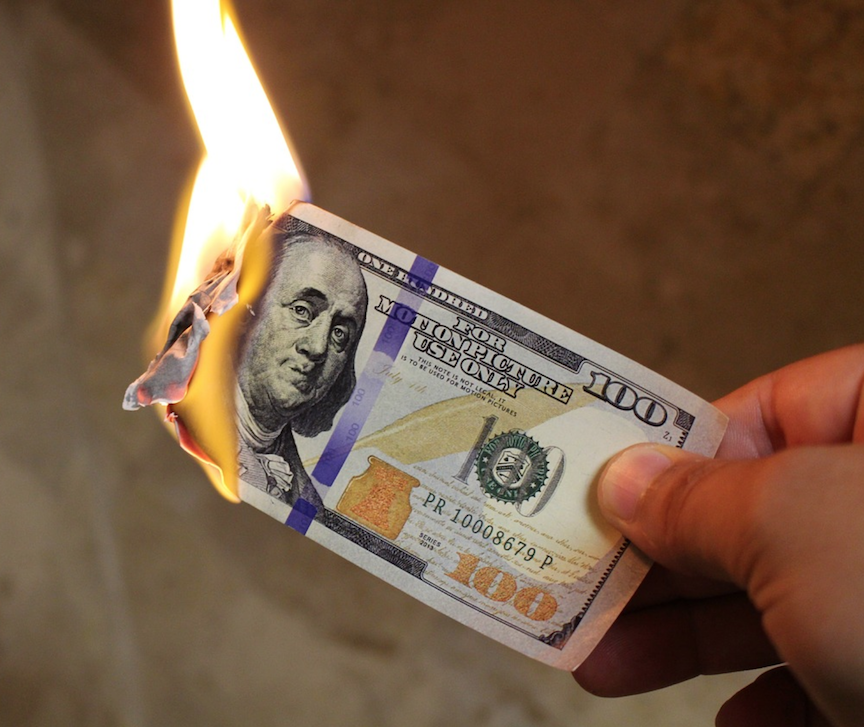 From the outset we should say that America has some obvious differences from Venezuela — we have a much more diversified economy, no dictatorship, and hold the reserve currency of the world, all of which create a buffer against hyperinflation.

A country like Venezuela, whose budget and ability to repay debt is based almost solely on oil income, is more similar to Russia or Saudi Arabia than to the US. Even as South America’s once-wealthiest country, it had multiple components that put it at much greater risk than the US or the EU.

But don’t entirely discount the possibility it could happen in the US, after the gross dilution of currency and runaway debt levels of the past decade. Let's explore how you can protect yourself and your family.

First off, this is what a total loss of faith in a currency looks like: 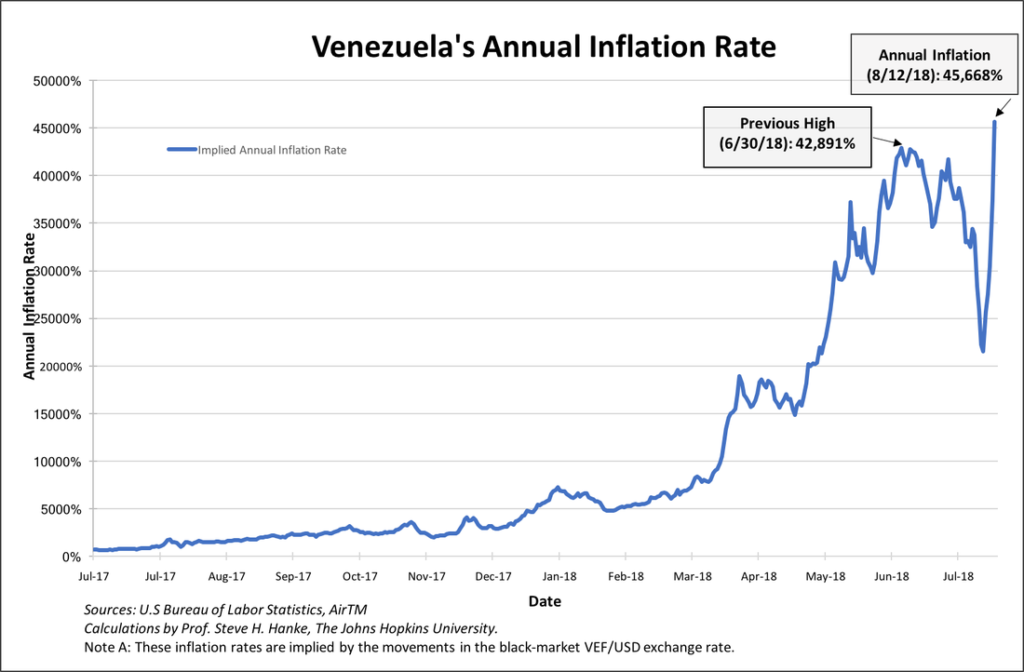 The annual inflation rate in Venezuela hit 45,668% as of August 12. In fact, Mike Maloney saw this coming almost five years ago:

The Venezuelan inflation rate is already twice as high since the above chart was created. It will probably be higher still by the time you’re done reading this article.

And that’s the distinction between inflation and hyperinflation. The former is monetary dilution that leads to higher consumer prices. The latter is a loss of faith in the currency. It’s psychological. It is a complete destroyer of economies.

I surveyed the prices of some common items in the US and applied Venezuela’s hyperinflation rate to them (45,668% rise in one year). I also looked at the loss of purchasing power in cash, as well as the gain in purchasing power of gold.

How many items in the right column would you be able to afford? 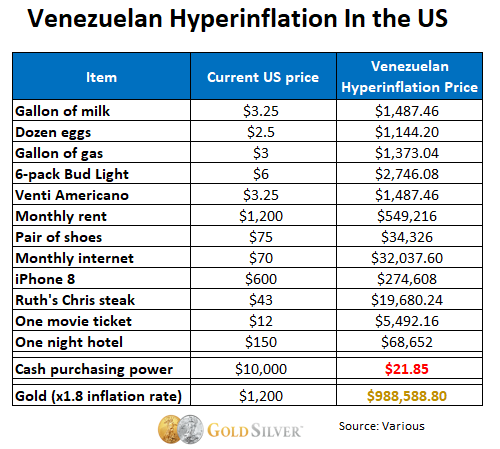 If hyperinflation hit in the US, it would be the direct result of the loss of faith in the dollar, which means these kinds of prices are exactly what could occur. Look what would happen to the dollar’s purchasing power: a nest egg of $10,000 wouldn’t buy you more than a nice lunch.

These are exactly the kinds of prices German citizens saw in the 1920s (and in every other instance of hyperinflation that’s occurred once every three years since).

And yes, that would be the price of gold in US dollars if it mimicked the Weimar scenario. Based on research we did on the hyperinflation that occurred in Germany in the early 1920s, the gold price rose 1.8 times more than the hyperinflation rate. Yes, the value of an ounce of gold in Weimar Marks outpaced the rise in consumer products at the time (check out the chart in our article.)

In reality, the gold price in Venezuela rose more than 3.1 million percent from the beginning of the year to July 30, selling for 211 million bolivars. In other words, gold investors haven’t just maintained their purchasing power but actually gained buying power.

If we experience hyperinflation in North America, you’ll be incredibly thankful for every ounce of gold you own.

Hyperinflation is an extreme example, so what if we just get “high” inflation?

Surging Inflation in the US: The “Common” Rarity

Author and professor Amity Shlaes found several examples from the past 100 years when US inflation had soared to alarming levels. Even more startling is that those inflationary spikes occurred within just two short years. Here’s what her research showed. 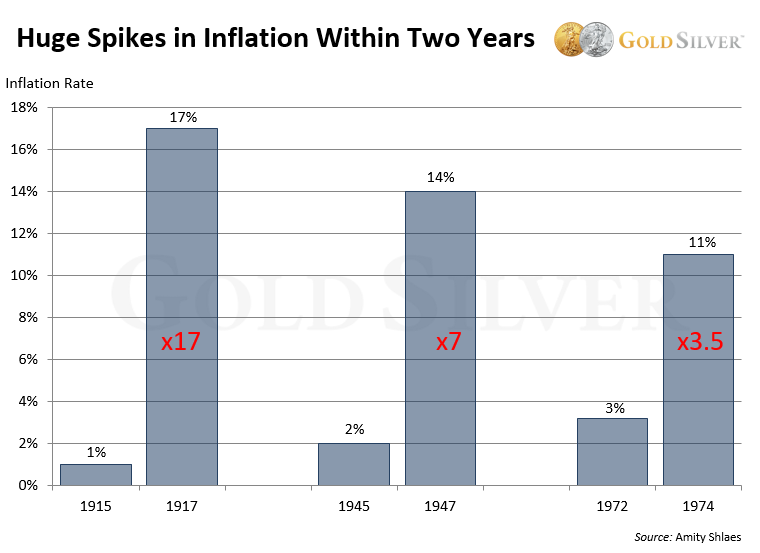 Based on an earlier version of the CPI-U, Shlaes says US inflation was at 1% in 1915. Within just two years, it soared to 17%. She reports this runaway rise in prices was because the Treasury “spent like crazy on the war, creating money to pay for it…”

Let’s apply these inflation rates to the same items above, along with cash and gold. 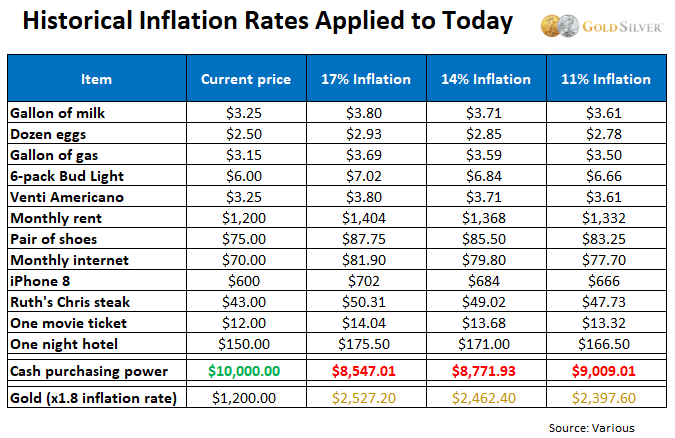 While the rises in the small items may not seems like much, you could easily find yourself without enough dinero to live life when you add it all up. Suddenly the dollar bills in your wallet and digits in your bank account won’t buy you what you need.

The loss in your purchasing power would be very real, which is the inevitable consequence of every inflation, big or small.

In contrast, if gold outperformed inflation by 1.8 times, your buying power would actually increase above and beyond the rate of inflation.

In the midst of the cold, hard reality of inflation, you would actually be able to continue your same lifestyle if you had enough gold. 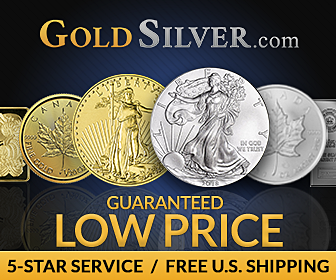 What exactly lies ahead may be difficult to pin down, but what is not difficult to ascertain is history’s message: gold will protect your standard of living, like it has for literally millions of people over thousands of years. If Venezuelan hyperinflation comes to your country, your best financial defense will be gold.