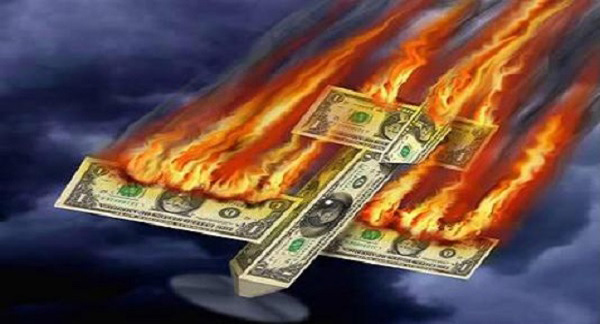 Historically, when a nation’s debt exceeds its ability to repay even the interest, it can be assumed that the currency will collapse. Typically, governments exacerbate the situation by printing large amounts of currency notes in an effort to inflate the problem away, or at least postpone it.

Although there are observers (myself included) who frequently discuss what a reserve-currency crash would mean to the world, there is little or no discussion as to how this would impact people on the street level, and perhaps that discussion should begin.

When currencies crash, the state often tries to float a new currency. Sometimes, it’s accepted, sometimes not. Generally, the people of the country (and those trading within the country) move immediately to “the next best thing.” In 2009, when the Zimbabwe dollar crashed, several currencies were used, but the US dollar was the clear favourite, as it was the world’s reserve currency and therefore the most “spendable” currency.

Not surprisingly, the Zimbabwean government fought the use of the dollar, as they wanted to retain control of the economy and the people. People were therefore penalised for using the US dollar and other currencies.

And that’s what most governments do, but here’s where that idea usually falls down: First, the “black-market” currency is so desired by the now-jaded citizens that they do all they can to avoid the new official currency. Soon, most transactions, although illegal, are undertaken in the black-market currency. Second, since no one really wants the new currency, even the political leaders are soon using the black-market currency.

Ultimately, the black-market currency is legalised (since it’s the only truly workable solution), and it often becomes the unofficial currency, if not actually the official one.

It’s safe to say that the EU, the US, and quite a few other jurisdictions are nearing currency crashes, and in all likelihood, the euro will go before the dollar. So, unless the EU has already prearranged a new euro, the US dollar might well be chosen as an immediate solution to the problem, as the US dollar is presently recognised and traded throughout Europe. Therefore, a relatively painless transfer could be made.

Then, the Dollar Crash

However, the dollar, which is presently praised as being a sound currency, is really only sound in relation to the euro (and some other lesser currencies). Once its less stable brother, the euro, collapses, the dollar will be exposed.

As the US dollar is a fiat currency and is on the ropes, the US (and any other country that is using the dollar as its primary currency when the time comes) will experience a currency emergency at the street level that will be unprecedented.

The big question that is generally not being discussed is: The day after the crash (and thereafter), what will be the currency that is used to buy a bag of groceries, a tank of petrol, a meal at a restaurant? Certainly, the need will be immediate and will be on a national level in each impacted country, affecting everyone.

I have discussed for some time that the US will be prepared ahead of time with a new, electronic currency. This will serve three purposes:

If the US does institute such a system, US citizens will then become the most economically controlled people in the world, overnight.

It’s likely that a black-market system would spontaneously be created by US citizens in order to bypass the new government system. A portion of daily trade would occur under the table. It would unquestionably be made illegal, and we can only speculate as to how prevalent it would become: 10% of all transactions? 30%? Anyone’s guess. Certainly, the government would crack down, and penalties might become severe.

Elsewhere in the world, there would be greater freedom, but what would their currencies be? There are many countries that presently use the US dollar as one of their official currencies. After a crash, the greater the link to the US dollar, the greater the loss of economic freedom, although, in most such countries, the government is likely to be less efficient than in the US, which would work in favour of the individual.

Such countries would also have the option of switching from the dollar to another dominant currency. With the euro and dollar gone, that currency might be the Chinese yuan. The difficulty with this possibility is that, presently, the yuan is not in common use on the street.

Adoption of a currency such as the yuan would require a sudden switch in monetary policy, complete with teething problems. However, recent developments amongst the BRICS and others indicate that many countries are already seeing the writing on the wall and are readying themselves for the use of the yuan as an alternate.

A Return to Precious Metals as Currency?

A further possibility is taking place in Mexico today. Mexico is remonetising silver. A one-ounce pure silver Libertad coin will function in parallel to (and be interchangeable with) the existing paper peso. Banks will value the Libertad daily, based upon the silver price. Thus, Mexico will create a legal way for its citizens to protect themselves against devaluation of the peso, whilst creating an internal protection against currency crashes in other countries.

If the Mexican government remains consistent in its plan, it will do more than simply help stabilise Mexico economically; it will serve as an example to other countries that when the Goliaths of the euro and US dollar fall, there is a very sound alternative.

Further, the more countries that follow this policy, the more silver (and for that matter, gold) would become an international currency. It would matter little to a petrol station owner in Canada, Australia, or Chile whether his till was filled with coins marked, “Mexico,” or whether they said “Iceland,” “New Zealand,” or “South Africa.” After all, an ounce of silver is an ounce of silver, no matter what the issuing country is.

As the Great Unravelling proceeds, we would be wise to monitor what happens with the Libertad in Mexico and watch for a similar return to precious metals in other jurisdictions. As this development progresses, we might wish to consider that, whatever jurisdictions are the most forceful in demanding the continued use of doomed paper currencies (or, worse, transferring into electronic currencies), we may choose to store our wealth, no matter how great or small, in a safer jurisdiction. Further, we may choose to reside in a jurisdiction where a currency crisis will be less likely to occur; to live under a government that does not seek to monitor and tax our every economic transaction.

Most people have no idea what really happens when an economy collapses, let alone how to prepare…

How will you protect your savings and yourself in the event of an economic crisis? This just-released PDF guide Surviving and Thriving During an Economic Collapse will show you exactly how. Click here to download the PDF now.