Nick Giambruno’s Note: Earlier this month, bitcoin reached almost $20,000. But as Jeff Brown showed you last week, there’s much more to the cryptocurrency story than bitcoin.

Jeff is Bonner & Partners’ tech investing expert. And over the last few months, he’s been traveling and learning everything there is to know about the technology that’s driving this boom.

Today, he explains why this market is just getting started…

We are just at the beginning of a revolution in blockchain-related technologies and cryptocurrencies.

This is an intense area of focus for me. But if you want to understand what’s really happening, you must be on the inside… and you can’t do that from behind a computer screen.

That’s why I travel as much as I do—meeting with executives, attending conferences, engaging my global network, and participating and contributing when and where I can.

I also attended a much smaller, specific conference supported by Berkeley Law, focused on financing and regulatory issues surrounding initial coin offerings (ICOs). Representatives from the SEC were present in full force.

Here’s what I uncovered…

The conference I attended in New York City is known as Consensus: Invest. Consensus conferences are some of the most notable blockchain and cryptocurrency conferences in the world.

This particular event however was special. It was the first time the organizer, CoinDesk, held an event focused entirely on institutional investors.

The conference was less technical than most blockchain related conferences. It focused on blockchain technology, cryptocurrencies, and what they mean for financial institutions.

It was fascinating to speak with and listen to traditional financial professionals. Most of them are struggling to get their heads around blockchain technology. Financial services incumbents like traditional banks, institutional funds, and hedge funds are all trying to determine their role in this exploding industry.

One thing was very clear to me—blockchain industry development has happened right under their noses… and they’re all scrambling to catch up. They’re also trying to take the same industry structure and business practices and force them onto the blockchain industry.

And it won’t work…

It’s like trying to fit a square peg into a round hole. The big financial institutions are trying to insert middlemen, increase friction, and position themselves as rent seekers just like they’ve been doing for centuries.

But the blockchain industry won’t have any of it.

These are precisely the things that blockchain and distributed ledger technology were designed to fix. And early blockchain companies have proven that it works. They’ve proven that the utility of these protocols makes the transfer of assets faster, cheaper, and entirely secure, all at a fraction of the cost of the way things work now.

This is why we’ve seen such a spectacular run-up in cryptocurrency values this year. Have a look at the chart below to see how significant it’s been. 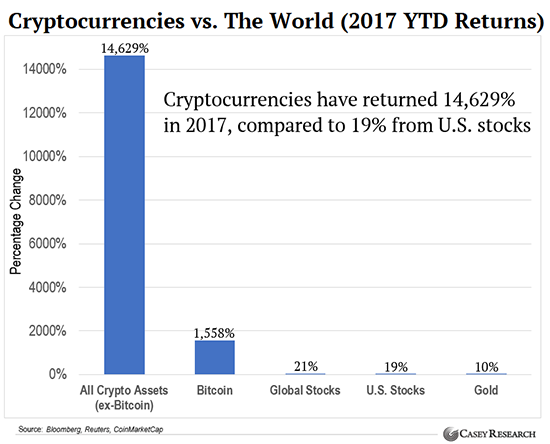 All digital assets (cryptocurrencies and digital tokens) excluding bitcoin have increased in value by 14,629%, compared to U.S. equities at merely 19% or gold at 10%.

You might be thinking that the run is over… I’m here to tell you that it is not. Not even close.

While we will see pullbacks and higher-than-normal levels of volatility in cryptocurrencies and digital tokens, the long-term direction is up… and much higher.

A Long Way to Run

There is a major part of the financial industry, the really big money, that still hasn’t entered the market.

And that big money will be an extraordinary boost to the cryptocurrency market when it enters. I’m talking about the institutional funds.

This was summed up by one industry executive who said, “Institutional guys are not really in it, the market just isn’t big enough yet… We really need to get up to the trillion-dollar market size and then the institutional funds will get in.”

That may be hard for some readers to believe. After all, they see the price of cryptocurrencies like bitcoin climbing almost daily. They might assume that this is already a huge market.

But you might be surprised to learn that the cryptocurrency market is still just a fraction of other financial assets. 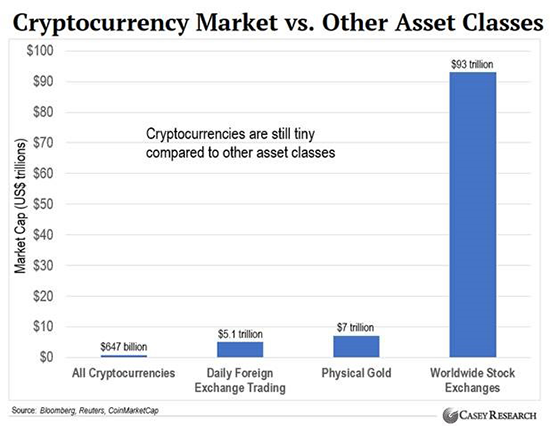 As I write this, the total market capitalization for all cryptocurrencies is $647 billion. That’s less than 10% of the value of the worldwide physical gold market. It is about 13% of all daily foreign exchange trading, and less than 0.01% of the total value of global stocks.

The cryptocurrency market is just getting started.

I expect to see a trillion-dollar market within 18 months.

Now, what do you think will happen when institutional money starts to flow into the cryptocurrency markets? That’s right—it will take off like a rocket ship.

Even at one trillion dollars, the cryptocurrency market will still be small. But all of that institutional money racing in will make it increase in size by multiples.

And the institutional money will be first putting their dollars to work in the cryptocurrencies that have the largest market capitalizations. That means that investors should be looking closely at bitcoin, Ethereum, and Bitcoin Cash to start. And then Dash and Litecoin.

This is an incredible opportunity for normal investors to get in before the smart money on Wall Street. Interested investors can still get in before these institutional funds start flooding the market. This is where the largest gains will be made.

The industry is moving so fast right now. And with the right time horizon, many more cryptocurrency millionaires will be minted with well-placed investments in these blockchain technologies.

Editor’s Note: Jeff believes investors stand to make 21 times their money over the next few years with blockchain technology. He thinks it’ll rewrite our society the way internet technology did over the past 20 years.

But if you’re hesitant to buy cryptocurrencies directly, he has a solution. He’s uncovered three ways to profit safely from the blockchain explosion without ever downloading a digital wallet or logging onto a cryptocurrency exchange. Click here to see how.

P.S. Smart investors stand to make 21 times their money over the next few years with blockchain technology. It’ll rewrite our society the way internet technology did over the past 20 years.

But if you’re hesitant to buy cryptocurrencies directly, then I have a solution. I’ve uncovered three ways to profit safely from the blockchain explosion without ever downloading a digital wallet or logging onto a cryptocurrency exchange. Click here to see how.