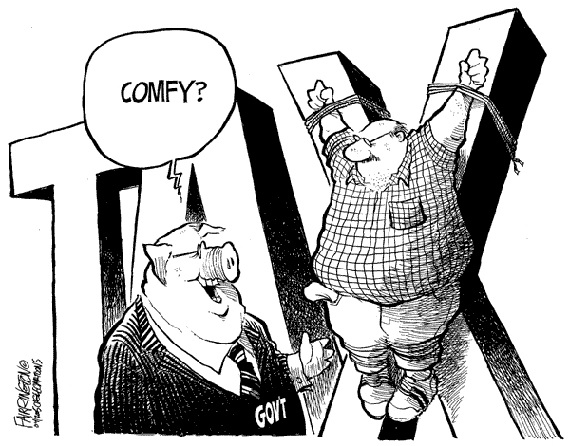 Today’s article is about tax competition.

More specifically, I want to explain why tax competition is a liberalizing force in the world economy and why politicians from high tax nations like France should not be allowed to undermine competition in order to prop up their inefficient welfare states. Most important of all, I want every taxpayer to realize why it is important to defend tax competition from statists who want to create an OPEC for politicians in high-tax nations.

But first, let’s spend a few seconds getting our definitions straight. Tax competition exists when politicians feel pressure to lower tax rates because they’re concerned that jobs and investment capital may cross borders—a process that has become much easier in recent decades because of globalization.

In other words, tax competition exists when governments compete with each other. The economic analysis of this process is very straightforward. Monopolies are bad, competition is good. That’s so simple even a politician should grasp the concept.

Let’s use an analogy. Imagine a town with just one gas station. That one gas station could charge high prices, maintain inconvenient hours, and offer shoddy service. But what if there are five stations in that town? Consumers then are free to choose, and this means gas stations will compete to offer the best product at the best price with the best service.

The same process exists with governments.

In the absence of any constraints, politicians will continuously raise tax rates because it’s in their self-interest to have bigger, more intrusive government.

This is why tax competition is such an important force for good policy. Even bad lawmakers are compelled to do the right thing when they fear that the geese that laid the golden eggs will fly across the border.

Ireland really deserves a lot of the credit here. By slashing the corporate rate from 50% to 12.5%, Irish leaders turned their economy from the sick man of Europe into the Celtic tiger. But the global effect is even bigger. In order to compete with Ireland, nations all over Europe and around the globe are racing to lower their corporate tax rates.

Now for the bad news. Not surprisingly, politicians from high-tax nations don’t like tax competition. They resent being forced to lower tax rates. Much like the owner of a town’s only gas station, they want captive customers who have no choices. These politicians are trying to undermine tax competition. Working through the Organization for Economic Cooperation and Development (OECD), an international bureaucracy based in Paris, they want to hinder the flow of jobs and investment from high-tax nations to low-tax nations.

The OECD even has a so-called harmful tax competition project. It put together a blacklist of low-tax jurisdictions, and it threatened them with financial protectionism if they didn’t help high-tax nations enforce their bad tax laws.

You may think this is so crazy that I must be making it up. But let’s see what the OECD has to say. In one of its reports, it said that low or no taxes is the number-one reason for blacklisting countries. The OECD also complained that low-tax policies unfairly erode the tax bases of other countries; and it said that tax competition is reshaping the desired level and mix of taxes and public spending.

How can competition be harmful?

The only way competition is harmful is if you’re a monopolist or an oligopolist, and you don’t like having competitors that threaten your secure position. Of course, that’s exactly what’s happening in terms of the OECD and other efforts to try to stamp out low-tax jurisdictions.

But when forced, the OECD admits it doesn’t like tax competition because it may hamper the application of progressive tax rates and the achievement of redistributive goals.

In other words, the OECD thinks low-tax nations should be forced to surrender their sovereignty to help high-tax nations like France and Germany prop up their inefficient welfare states.

The French and the Germans should have the right to adopt bad tax policy, but they should be prepared to deal with the consequences—including a shift of jobs and investments to places like Ireland, Hong Kong, and Singapore. Under no circumstances should they be allowed to create a global tax cartel to hinder the competitive position of nations with better tax laws. This is why the OECD’s anti-tax competition project is such a threat to economic freedom.

I appreciate your spending some time learning about this important issue. Please help defend tax competition by circulating this article to your friends and colleagues. We need to educate American politicians about this threat so they stop subsidizing international bureaucracies like the OECD that pursue policies detrimental to economic freedom.

As Thomas Jefferson said, “Eternal vigilance is the price of liberty.”

How serious is this economic downturn likely to be?