We’ll get to that answer a little later.

But first, Doug Casey and I had a very busy week zigzagging throughout the crisis-stricken island of Cyprus.

We obtained a much clearer understanding of what actually happened and uncovered a number of details you won’t hear about in the mainstream media.

Also, as I mentioned previously, we are in the process of putting together an exciting new project for International Man. The valuable intelligence gleaned from this trip will be a part of it.

It’s a project that dovetails perfectly with Doug’s unique expertise.

It will be a crucial tool for taking the destructive actions of a desperate government and turning them on their head… and to your advantage.

In that sense, it will be a bit like a judo move where the size and momentum of a larger opponent is used against it.

For now, we have to keep the details under wraps.

In the coming weeks, I’ll be interviewing Doug about the findings of our trip, something you won’t want to miss, and International Man will be making some big announcements. So stay tuned!

Anyway, shifting gears, due to its rich history and critical importance today, I have long been interested in the Middle East.

On the way out of Cyprus I stopped off in nearby Beirut, Lebanon. Beirut is a city that I am intimately familiar with, as I lived there for a couple of years while working at an investment bank.

Lebanon is a small country that has more than its fair share of complex and long-term problems, and it is not necessarily a place to consider for planting any internationalization flags (unless for reasons of personal preference). That said, the recurring crises in the country have forged a dynamic and resilient financial system.

There are three features that distinguish the Lebanese financial system:

1. The banks have the highest cash reserve ratios in the world.

2. The central bank holds the second highest gold reserves on a per person basis.

A couple of years ago, the Mises Institute, in this interesting article, stated:

“Lebanese banks are at all times required to maintain a minimum 30% reserve ratio in cash, half of which is to be kept by the banks themselves, with the balance deposited with the central bank. While this is a far cry from the full reserves advocated by the Austrian School (of Economics), they nevertheless constitute the highest in the world, far higher than any Western country.”

Lebanon is also one of the few countries left in the world that still has real financial privacy, both in theory and in practice… just not for Americans, though, thanks to FATCA, which Lebanon has indicated it will comply with.

Additionally, Lebanon ranks only behind Switzerland in terms of gold reserves per person according to this chart below from The Economist. 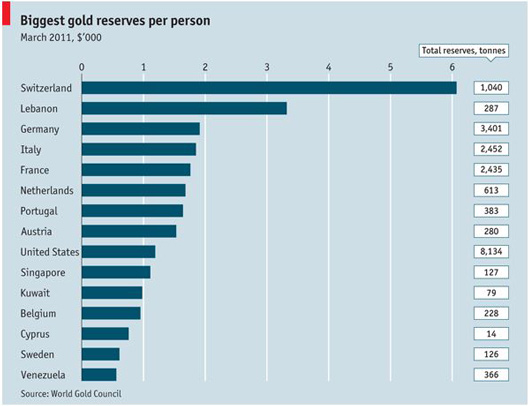 So while Lebanon certainly has its problems, it has its bright spots too.

Another thing that sticks out about the Lebanese is that many of them are very aware of the importance of being internationally diversified.

This is due, in my view, to a number of factors including their long history as a maritime trading power and the geography that comes with being at the crossroads of the east and west, which has long fostered broad international interaction. The concept of diversifying internationally is something that has come naturally for them for many centuries.

In more modern times, the perpetual political instability in the country has led many Lebanese to develop an understanding of the significance of having a second passport and the insurance policy that it provides. Many of them have two or even three passports, and those who don’t, wish they did.

The Lebanese passport itself is not a good travel document. In most countries outside of the Middle East a visa is required. Especially coveted among the Lebanese (and many other nationalities) are passports that allow for visa-free travel to the Schengen Area in Europe.

Of course, having a second passport is not just important for the Lebanese. The political diversification benefits that come with obtaining a second passport are universal and prudent for anyone in the world to obtain… especially those under the jurisdictions of a desperate (fiscally or otherwise) government.