For the aspiring Edward Snowdens among you, Kazakhstan does not have an extradition treaty with the US.

It’s one of the few places on Earth outside the long reach of US law.

You can always hide in Kazakhstan. Though, having just been there, it wouldn’t be my first choice.

I went to Kazakhstan because it’s the world’s largest uranium producer. I think uranium has the most profit potential of any resource market right now. I watch the industry very closely.

The country also showed up on my Value Radar’s sweet spot. (The Value Radar is a proprietary tool I created for pinpointing world markets with the highest upside.)

So, I put my boots on the ground in Kazakhstan to check things out… 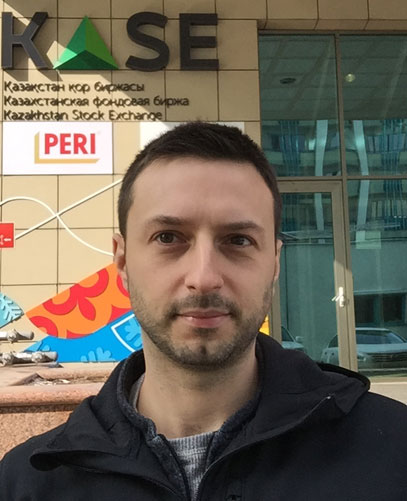 Nick Giambruno, your editor, at the Kazakhstan Stock Exchange

Doug Casey and I (Nick Giambruno) are expert “crisis investors.” We invest in markets that are bombed out, hated, and depressed.

That’s how I wound up in a place like Kazakhstan.

Spotting fear and the bargains it creates is our specialty. Doug and I fly around the world chasing economic collapse, civil unrest, revolution, war, and geopolitical turmoil. Then we scour the rubble for crisis-born opportunities.

Some investors call us storm chasers. But unlike people tracking F5 tornadoes, we’re not in it for the adrenaline. We’re in it for the profit.

Kazakhstan is dirt cheap. A 30-minute cab ride from the airport cost around $5. Dinner in one of the nicest restaurants was $20. Due to the commodities slump, the local currency has lost over half of its value in recent years.

The country is also strategically positioned. It’s a member of the Eurasian Economic Union, a Russian-led trading bloc. And it’s part of the Shanghai Cooperation Organization (SCO), a military and security organization led by Russia and China.

Think of the SCO as a sort of “NATO of the East.”

Doug Casey has some thoughts on this important country. So I’ll hand it over to him to explain the rest.

Kazakhstan is gigantic. Over a million square miles—the size of Western Europe, or the US east of the Mississippi—but with only 17 million people. In the east, on its 2,000-mile-long border with China, the Himalayas rise up out of the plains, but most of the country is just vast, desolate grasslands, or steppe. Two-thirds of the people are central Asians—tall, rangy looking Orientals who speak languages in the Turkic group; one third are Russians.

That's information you can get out of any world atlas, and it's not worth much, because nothing that everyone knows is worth much. What I want to do is tell you what I think it means. What's going to happen in Central Asia in the near term and long term, and what you may want to do about it.

My friend Rick Maybury coined the term “Chaostan” for this whole part of the world. It's populated by dozens of tribes and ethnic groups, most of them ex-nomads speaking different languages.

Perversely, the main things tying them together are a veneer of Soviet culture and the Russian language. And one other thing: an ingrained dislike of Russians. These folks have just never learned to appreciate the Russians conquering them, purging them, taxing them, destroying their indigenous cultures, and drafting them for their armies. They rather resent having been used as pawns in what used to be known as “The Great Game,” which was largely played between the Russians and the British in the 19th century.

It's a part of the world where old antagonisms die hard, where grandmothers inculcate their hard luck stories into younger generations at dinner each night. One good thing about this country—being both big and lightly populated—is that people who don't like each other don't have to live next door to each other.

The bad thing is that people in neighboring countries might see all those wide open spaces and decide they'd like some. That's been the case in this part of the world since at least the times of Genghis Khan and Tamerlane, and I don’t see any reason that's likely to change soon. Or perhaps not. Today’s wealth doesn’t lie in the theft of cattle and gold, and the enslavement of the natives, so much as in technology. That’s cause for some optimism.

When it was still part of the Soviet Union, Kazakhstan had border disputes with China in 1961 and 1967. Thousands of Uighurs and Kazaks tried to cross over from China. In 1969, 54 died in a clash over an island in the Ussuri River.

Jimmy Rogers made an excellent point in his book Investment Biker when he said that Siberia was eventually going to be transformed from a backwater of Russia into something very different, by Japanese capital and Chinese labor. That may also prove true of Kazakhstan.

For at least the moment, however, this is the most Russified of the Central Asian republics because of its proximity to the Motherland. The Great Russians endeavored to populate all their conquered lands, something else the original inhabitants rather resent. I found Kyrgyzstan more appealing because it had more of its native culture intact; you see few Russians, and the country is much more rural.

Unfortunately, however, politics are paramount throughout the old Soviet Empire. And although religion is not currently much of a factor here, that appears to be changing. The Russians generally pay lip service to the Eastern Orthodox variation of the Hebrew god Yahweh, while the Asiatics acknowledge the Saudi god Allah.

These gods don't currently play much of a role in people's lives, however, since over the last several generations Marxism has acted as a secular religion giving meaning, however perverted, to people's hardscrabble lives. Local priests and mullahs are (justifiably) seen to be corrupt, and their gods ineffectual in the face of the Almighty Marxist-Leninist State and its commissars, who largely cast down the earlier deities. Gods are, after all, available in many varieties.

But since God the State has, in its turn, been cast down, a vacuum has formed. People have nothing to believe in. And with no television or sports to distract them, they have time to think about it.

Confused Asiatic heads are being aggressively filled with thoughts of the Prophet by hardline mullahs from Iran and Afghanistan, showing fallen away Muslims the error of their ways. And many flavors of Western fundamentalists, followers of the man known as Saul (later Paul) of Tarsus, are making huge inroads among the Russian ethnics, counseling them to rise up against unrighteousness.

Although I have no problem with people following any religion they like—it can make for stimulating philosophical discussion—problems inevitably arise when there's religious activism in a political context. The results are invariably ugly.

In Palestine, for instance, before the Israeli takeover, Jews, Christians, and Moslems all lived peaceably. Their beliefs differed, but it made little more difference than whether they preferred vanilla, chocolate, or strawberry ice cream; cultural and religious variety only created an interesting diversity. The government was only a minor nuisance, manifesting itself mainly with taxes that no one felt an obligation to pay anyway, and people busied themselves mainly with the most benign of all activities, making money. Religion only became an issue when waves of new Jewish immigrants, who took their religion and politics very seriously, set up their own state. The rest is very bloody and troubled history, and that story is far from over.

A variation on that theme could occur throughout Central Asia. Certainly the groundwork is being laid by rabid proselytes from the world's two major missionary religions. My guess is that religion will become a major cause of bloodshed here in the future. It looks, however, like the Muslims have a considerable lead in the religious sweepstakes.

Editor’s Note: Doug Casey and Nick Giambruno look for opportunities where everyone else has thrown in the towel. That’s when high-quality companies become dirt cheap.

You might think crisis investing only works overseas. Not so… The next major crisis-investing opportunity will happen in the US. Click here to learn how America is “Ground Zero” for the next great global crisis.