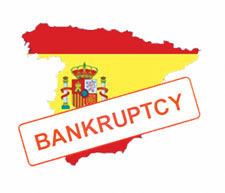 Recently the IMF, using diplomatic language, effectively declared Spain to be bankrupt, a fact that has long been apparent to those paying attention.

Spain has the worst structural deficit of any developed country, which means that it will have to continue significant borrowing to meet expected government expenditures, even if the economy returns to growth (which is far from certain anytime soon).

The unemployment rate in Spain is a staggering 25%, and that’s according to the “official” numbers, which are likely more rosy than reality. This means it is unlikely that the Spanish government will have the political will to consider any sort of austerity measures that would make any meaningful difference.

So without austerity, how does Spain address its rapidly growing deficits?

Since Spain uses the euro currency it has effectively given up the ability to conduct an independent monetary policy. In other words they cannot print or inflate their way out of it, an option that would be very much on the table if Spain still used its old currency, the peseta.

The only option left for Spain to finance its growing deficits is to continue to borrow more and more.

This leaves Spain with an ever-growing pile of government debt, which is expected to rise from 84% of GDP in 2012 to nearly 111% in 2018. This is the worst gross debt/GDP outlook for any advanced economy.

In short, Spain has the fastest rising debt level of any developed country and no realistic options to stop it.

It certainly appears that some sort of restructuring or “emergency measures” are unavoidable at this point. This isn’t new information, and one could have drawn this conclusion months ago.

So, what is the significance of the IMF now endorsing as a fact that Spain is insolvent when it was easily discernable for some time?

It may be a signal that those “emergency measures” are becoming more imminent for Spain.

The fact is, capital controls and outright wealth-confiscation can happen in any country that is desperate enough. By most standards, Spain appears to be sufficiently desperate.

Of course, if you have any exposure to a desperate government, like Spain or Cyprus, the time to act is before they implement “emergency measures.”

It usually starts with a surprise ‘bank holiday’ or at the beginning of a long weekend. Once the banks are closed, the government is free to confiscate as much wealth as it can get away with. This can come in the form of a “tax” on deposits, like in Cyprus, devaluating the currency, or the nationalization of pensions, among other measures. After the wealth has been confiscated, capital controls are usually put in place before the banks are allowed to reopen. This is done to prevent the remaining wealth from fleeing the country.

I sincerely hope that you all have had the chance to internalize the 4 lessons of the Cyprus debacle. With such a recent and stark example of what a desperate government is capable of, nobody should have to relearn those lessons again if and when Spain follows suit.

See you next week,