I’d bet that many of you have thought about or discussed the following question: “What are the chances that the political situation might improve in the US?”

I know I have.

Unfortunately, I have long concluded that the chances are slim to none… and slim is out of town.

The reason for this is simple: a growing majority of voters in the US has deeply ingrained collectivist impulses in some fashion or another. In other words, they’re addicted to the heroin of the failed policies of the welfare, warfare, and nanny state.

Speaking of the nanny state, New York City is perhaps one of the most infamous incarnations of it. The bureaucrats in the Big Apple have a particularly strong affinity for regulating every aspect of the personal lives and businesses of its residents. It’s all done “for your own good,” of course—the standard catch-all justification for big government.

It’s delusional to think that fatal accidents could ever be fully eliminated, no matter how many police officers or enforcement cameras there are on the streets. It’s not unlike trying to totally eliminate bathtub falls by putting a police officer or a camera in every bathroom.

Jaywalkers in particular have been singled out for extra attention by the police in “Vision Zero.”

Consider the story of Kang Wong, an 84-year-old man who was recently stopped for jaywalking near Broadway and 96th Street at around 5 in the evening. Wong, who apparently didn’t understand what was happening or why he was being stopped, tried to walk away from the police. The situation escalated, and the police ended up arresting and bloodying him (picture below).

Few New Yorkers question why the money extracted from them via taxation—to pay for the police—didn’t instead go towards dealing with real crimes (aggressions against people and property). Nor did many question the disturbing absurdity of the bloodying of an 84-year-old man spurred by the increased enforcement of jaywalking in the name of the “Vision Zero” fantasy.

This whole ordeal underscores why I’m not particularly optimistic that a significant number of Americans will change their views on collectivism and personal freedom anytime soon. 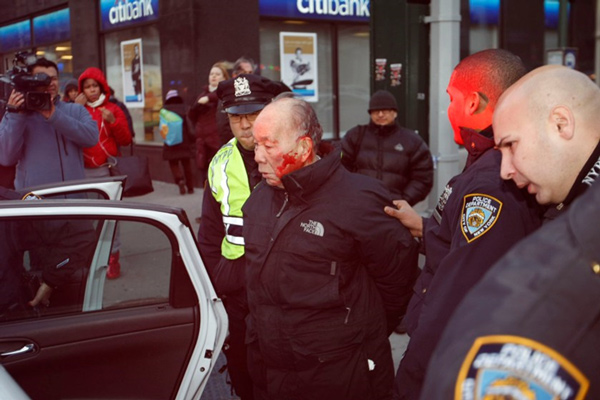 Many have been force-fed since a young age the notion that democracy is the most sublime form of government. I believe the reality, however, is quite different—especially once a society loses respect for the rights of individual. In other words, when the majority or the collective trumps all.

Then it only takes 51% of the people to agree to restrict the rights of the rest of the 49%—which amounts to nothing more than mob rule dressed up in a suit and tie.

If 51% of the people vote to elect a guy who wants to turn their city into a police state in pursuit of the delusion of totally eliminating traffic deaths, they can. (Note: NYC mayor Bill de Blasio won in a landslide, with 73% of the vote.)

If 51% of the people vote to elect a guy who wants, in the name of the greater good, to force you to buy health insurance you don’t need or want, they can.

If 51% of the people deem it “fair” that the top income tax bracket to be 75%, then so be it. It’s already happened in France.

Or suppose that gold explodes to the upside (another way of saying the currency crashes) and 51% of the people demand, in the name of fairness, a precious metals windfall profits tax.

These are the kinds of possibilities that can occur in a democratic society with collectivist leanings.

It brings to mind the words of H.L. Mencken: “Democracy, too, is a religion. It is the worship of jackals by jackasses.”

Granted, the US has not arrived at some of these destinations yet… though I believe we are on the path toward it—and there’s no turning back.

The reason is simple: a growing majority of Americans are financially dependent on the government.

It’s estimated that around 47% of Americans are already receiving government benefits in some way.

Here is 3 minute video on what Judge Napolitano says about the situation.

But I believe 47% is not an accurate reflection of the situation.

We also need to consider all government employees as well as those in the nominally private sector who make a living off of the warfare state—like defense and other government contractors who win huge no-bid contracts.

Those involved in the military industrial complex are living off slops at the government trough just as much, if not more than those who collect food stamps and other traditional forms of welfare. Yet they aren’t counted in the statistics. So we need to include them to get a more complete picture of who is financially dependent on the government.

Anyone who exists off of political dollars instead of free-market dollars should be counted.

When these people are included, we’re well north of 50% of the American population (a solid majority and growing) that’s financially dependent on the government in some form.

This means the US has crossed the Rubicon.

It’s not good news for those opposed to collectivism.

This built-in majority of welfare recipients and government employees guarantees that there will be a solid voting block to continue—and accelerate—these policies. It would be foolish to assume that a meaningful number of these people would vote to stop the government from giving them benefits or otherwise vote to break their own rice bowls.

The notion that a significant number of people living off of government largesse will be brought around to an individualist or libertarian way of thinking is a pipe dream.

You’d have better luck converting them to become Jehovah’s Witnesses.

In other words, there is no hope for positive change to come from the political system.

Therefore, I believe your time and energy are best spent preparing for and protecting yourself from the effects of a collectivist system that eventually collapses under its own weight… like all of them eventually do.

Once you’ve realized that it is futile to stop this collectivist tsunami, the next logical question becomes “How do I protect myself and my savings?”

The answer is: the same way you would with a regular tsunami… get out of the way! 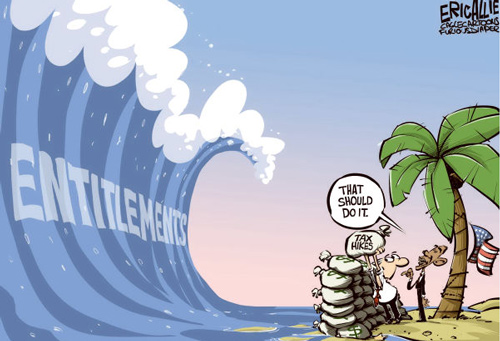 The good news is that thanks to internationalization, you don’t have to be a passive victim.

Moving some of your savings abroad in the form of offshore bank and brokerage accounts, foreign real estate, and physical gold held in safe jurisdictions, will go a long way toward protecting yourself. Obtaining a second passport is an important part of the mix as well.

It’s not all doom and gloom; the world is your oyster, and there are very attractive jurisdictions that are cause for optimism. And that’s what International Man is all about—making the most of your personal freedom and financial opportunity around the world. The free IM Communiqué is a great place to start.

There are two ways people can relate to each other: Voluntarily or coercively.