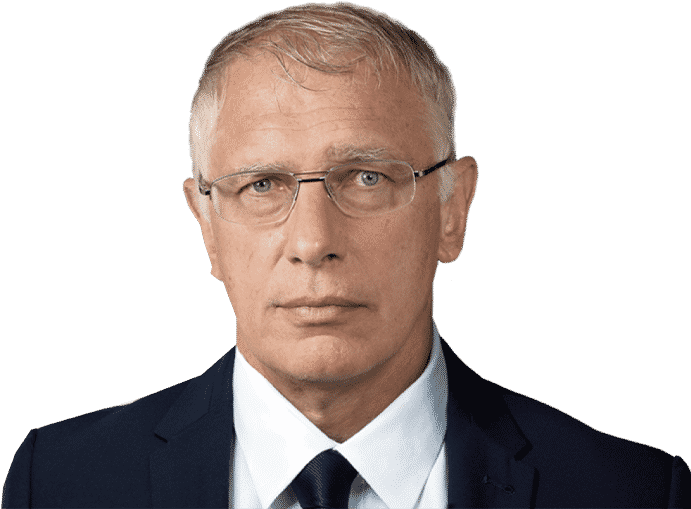 Legendary Speculator Reveals the Number One Play for Life-Changing Profits

“The years to come are going to be tough on everybody, but the speculator has by far the best chance of coming out ahead.”—NY Times Bestselling Author, Doug Casey

We’re in an economic no-man’s-land…

There is a stock market bubble, a real estate bubble, a bond super-bubble… it’s really an “everything bubble.”

And now, the “everything bubble” has finally found its pin.

It seems almost every investment is high risk.

How did this happen?

In a desperate attempt to paper over their problems, governments have printed trillions of new currency units, brought interest rates to below zero, and bailed out failing institutions.

But those gimmicks have now been exhausted.

The whole system will have a complete reset, and soon.

There’s going to be much less stability of any kind—financial, economic, political, social, cultural, or military—in the years to come.

Paper currencies will crash, as they have many times throughout history.

This isn’t a vague prediction about the future.

Whether it’s groceries, medical care, tuition, or rent, it seems the cost of everything is rising.

It’s an established trend in motion that is accelerating and now approaching a breaking point.

We’re in the early stages of a currency crisis.

You have to decide—basically right now—how you’re going to play your cards over the next few years.

If you don’t, you’re going to find yourself acting in an ad hoc way in what will likely be a chaotic situation.

If that’s the case, you will likely wind up as financial roadkill.

But if you make the right moves, you could actually make windfall gains instead of suffering losses.

Volatility is not necessarily your enemy. It can be your best friend.

Legendary speculator Doug Casey and the International Man Team will show you how to do it.

The ONE Opportunity You Don’t Want to Miss

Doug Casey is a well-known contrarian investor and self-made multi-millionaire.

He is a sought-after speaker at investment conferences around the world, and usually it is standing room only during his presentations.

Doug literally wrote the book on profiting from periods of economic turmoil.

His book, Crisis Investing, spent 29 consecutive weeks at #1 on the New York Times bestseller list, earning the title of the best-selling financial book of the year.

For decades, Doug and his team have specialized in finding incredible speculative opportunities with life-changing potential.

Their work has helped thousands of people.

And now, they’ve released their latest report on an urgent situation in the markets and the number one way to profit from it.

Symmetry Is for Suckers

You probably learned about symmetry in grade school.

It’s when the parts of something have equal form and size. For example, cut a square in half, and the two parts are symmetrical.

Symmetry is attractive in some forms. The more symmetrical someone’s face is, the more physically attractive they are considered to be.

Symmetry is often attractive in architecture.

But when it comes to investing and speculating in the financial markets, the expert financial operator eschews symmetry. Symmetry is for suckers.

An asymmetric bet is one where the potential upside of a position greatly exceeds its potential downside.

If you risk $1 for the chance of making $20, you’re making an asymmetric bet.

Amateur investors too often risk 100% of their money in the pursuit of a 100% return.

These are horrible odds that the financially and statistically illiterate flock toward… the kind you find in casinos and most sports betting.

It’s one of the key reasons most people struggle in the market.

We’ve always been more attracted to asymmetric bets… where we stand a good chance of making 10, 50, even 100 times the amount we’re risking.

We’re not interested in even bets. We’re taking the field only if our potential upside is much, much greater than our potential downside.

There is only a limited number of quality speculations available.

As the serious money begins to flood into them, investors who take a position now could turn their dimes into dollars.

But the crucial part is getting in ahead of the masses. Otherwise it might be too late.

Our new report—“International Man’s Number One Speculation for Life-Changing Profits”—has our thoughts on a high-potential, yet little-known speculation.

We’re making this report available for a one-time price of just $19.99… peanuts compared to the profit potential it has.

Due to the sensitive nature of the opportunity, there will be no refunds on this offer.

However, we’re confident you’ll see the value in our work right away.

Here’s Everything You Receive

You’ll receive a full rundown of our top speculation and how to access it right now. We’ll tell you all about our top play in this low-risk and high-reward niche. It’s the key to profiting from the greatest bull market of our lifetimes. You can easily buy it like any stock from a regular brokerage account. 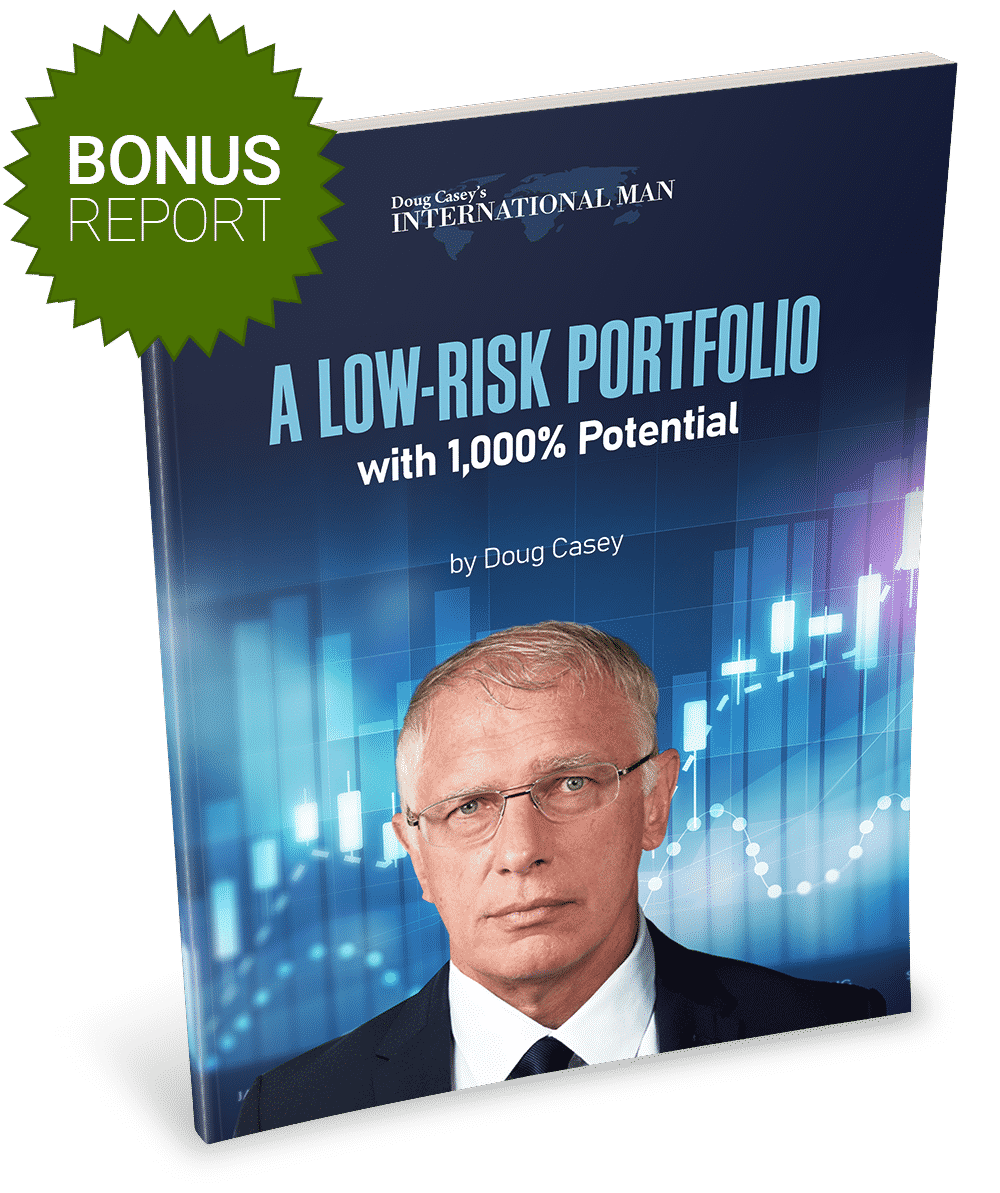 Inside this special report, legendary speculator Doug Casey uncovers his unique “10 x 10” approach to help you become a more successful speculator. It’s an investment strategy with the potential to make you a fortune while minimizing your risks. Bonus Report #2How to Keep Your Wealth Safe and Within Reach

The International Man team reveals how to protect yourself from wealth confiscation. This is the authoritative guide to investing in precious metals, and critically, keeping ​them safe once you’ve bought them. It includes a full analysis of our trusted resources. We show you the best ways to buy and store gold—and other precious metal—in the most favorable jurisdictions. 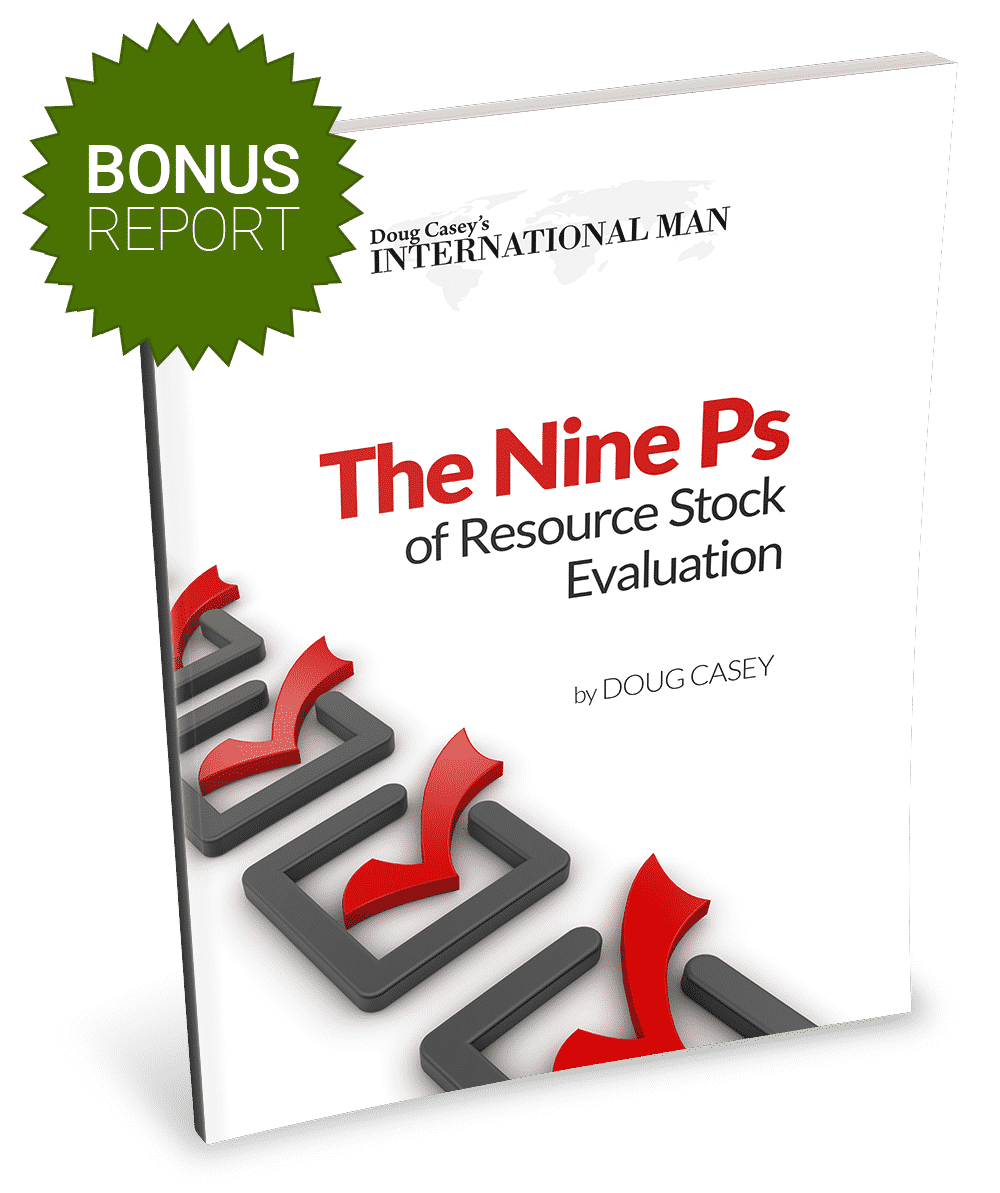 Inside you’ll find Doug Casey’s secret to finding winning natural resource stocks. It’s the ONE report you need to understand how Doug consistently finds the next junior mining stocks set to deliver enormous profits. Crucially, this report will also show you how to avoid the most common mistakes while investing in this volatile space. That information alone could save you thousands of dollars.

Whether it’s financially, militarily, socially, or politically, the world is facing a severe crisis on multiple fronts that could break out at any moment.

That puts a premium on acting before it is too late.

Fail to act now and you could miss out on what we think could be a life-changing speculative opportunity.

Get immediate access by completing the secure order form below.

The Most Dangerous Event of the 21st Century