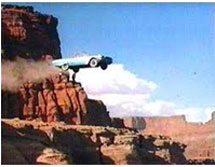 Thelma and Louise was an interesting film, released 1991, about two women who merely sought to escape their respective unpleasant home situations and went for a drive down the highway.

However, in their pursuit of a bit of relief, happenstance and bad judgement led them into ever more serious difficulties. As each new problematic event presented itself, it seemed that Thelma and Louise chose the most immediate solution, which only served to deepen their dilemma. At the film's end, they found that they had arrived at a dire ultimatum: a choice between prison and a drive off a cliff.

Today, we can see a parallel between this film and the current economic situation.

For decades, the successive political leaders of many countries, particularly in the US and the EU, have promised their populations a bit of relief from their situations. This, of course, is the perennial tendency of politicos, as the majority of voters in any country do like to hear that they will receive largesse from their governments that they have not actually earned. Voters rarely bother to worry who is to pay for such largesse. The promise that they will receive it invariably suffices.

Of course, in order to deliver on such promises, someone does have to pay, and, over the decades, our real life Thelma and Louise (the US and the EU) have consistently opted for the most immediate solution, without concerning themselves with the inevitability of long-term repercussions.

Now, we find our Thelma and Louise at the edge of an economic cliff, faced with the most difficult decision they have ever faced. “Should we do the right thing – face the music and cut taxes and government expenditure drastically – in order to save the economy? Or should we put the pedal to the floor in one last act of irresponsibility – Have one last fling prior to the inevitable crash?”

Their actions over the last few years have evidenced that they have chosen the latter.

If the reader happens to live in, say, Hong Kong or Panama, he might say, “Well, it's all very sad, but, fortunately, it doesn't really affect me all that much.” However, if he lives in the US or Europe, he is likely to be saying, “Hang on, I don't mind Thelma and Louise deciding their own fate, but I happen to be riding in the back seat of the car at the moment, and I prefer not to go off the cliff.”

To be sure, there have been many warning signs along the road to indicate that to exit the car might have been a good idea, but, for whatever reasons, they did not. Now, it is becoming increasingly apparent to a larger number of people that the joy ride is soon to end, and end rather badly.

As such, it would be understandable if we were to see the passengers in the back of the car request that they be let out. As Europe has some 740,000,000 inhabitants and the US has a further 310,000,000, even if only one percent chose to make an exit at some time in the next few years, this would mean ten million people exiting Europe and the US, an exodus which would be unprecedented in world history.

But let's not make any rash assumptions here. There will be many who will tough it out where they are, even if the economic situation were to worsen considerably. There will also be many others who simply do not have the wherewithal to make such a move.

But then, the one percent that we have suggested is quite a small number. It is safe to assume that one percent would have both the desire and the means to seek a better life elsewhere.

What, then, would happen, if they did reach such a decision?

Let's have a look at what happened in the 1930's in Germany. The economy was in dire condition, the country was rapidly turning into a police state with socialist overtones, and, worse, Germany was ramping up towards war.

Since 1933, the future looked ever-grimmer for Germany's Jews. Once this had clearly become a trend, why did they not decide to make a move?

Well, in fact, some did. At first, they were encouraged to go, and thousands left. But then policy changed: the German government limited the amount of money a departee could take with him. Later, it actually became a requirement to pay for permission to leave Germany. (Note: Exit taxes have begun in the US, with the 2008 HEART Act.)

But the real blow came in 1938. US President Roosevelt called a conference of thirty two countries. They met in Evian, France to discuss the potential problem of Jewish German refugees. Although all the delegates expressed their sympathy, only the Dominican Republic agreed to welcome additional Germans who sought to exit their homeland. As a result, Germans seeking to expatriate found that they were unwelcome in most countries and were, in effect, trapped where they were.

And the reason given to justify the denial for entry? Well, the world was in a depression, and the destination countries did not need a large influx of people who might take jobs from those already resident. (Sounds fair on the surface of it, but it does have a bit of a bad smell to it. This may be why the Evian Conference tends not to be mentioned in history books.)

And so, we fast-forward to today. The world is again in a depression (although no government wishes to acknowledge the dreaded “D” word), and the potential exists for the largest mass-exodus in history, should worse come to worst in Europe and America.

If we happen to live in one of these locales, we may wish to consider whether our exit may be closed off to us, should we decide to seek a better life elsewhere. We must bear in mind that the world is again in severe economic times and it is unlikely that any country out there desires a flood of refugees on its shores.

If the reader presently has his sole legal residence in either Europe or the US, he might wish to consider whether he is indeed a passenger in the back seat of Thelma and Louise's car after they have reached the decision to drive off the cliff. If he decides in the affirmative, he would be well-advised to seek an alternate legal residence sooner rather than later.

You can learn all about internationalizing yourself with second passports… moving your cash offshore… setting up an offshore LLC… investing in international stock markets and foreign real estate…. It's all available in an information-packed special report from Casey Research titled Going Global 2013. You won't find a better resource for internationalizing your life and your assets. Click here to learn more.