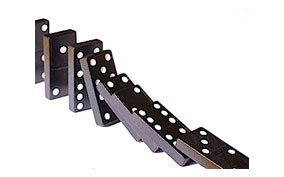 At this moment in time, the big economic news is Cyprus. A thousand reporters are chasing this story, each hoping to be the first to report on the latest breaking news on the unfolding saga.

However, for the investor, if he has been preparing himself carefully for the events that will unfold in the next few years, Cyprus will have been an event that did not impact him at all.

This sounds like economic heresy, because the very idea that banks would systematically and intentionally steal the money of its depositors is a major, major event.

Let's back up here and look at the way most investors handle their investments. It is very much the norm for the average investor to keep an eye on the dailies so that, as market trends change, he can react quickly. He hopes that he can either capitalise on a growth trend or unload his holding in a declining trend.

Seasoned investors term this method “chasing the market.” If they have been successful investors, a part of their success has been that they have recognised over the years that, if they wait until an upward trend has already occurred and then try to catch the train as it leaves the station, they have already missed the opportunity to maximise profit. Likewise, if they wait until the dailies tell them that a decline has begun, they are again behind the curve and consistently end up selling after the decline is already underway.

Typically, this is a recipe for overall loss, as declines are often more dramatic than rises. Therefore, seasoned investors (hopefully) learn that, in order to prosper, they must be prepared to become contrarian – to seek out those investments that are decidedly unpopular at present, but show the promise of significant long-term gains.

As such, this means that the successful bottom-fisher must develop two rules to sustain his ability to succeed. First, he must develop an ability to think independently of the daily movements of a particular investment and focus on the long view – the overall potential. Second, he must learn to ignore the incessant input from others that his thinking is out of keeping with the norm.

Similarly, a contrarian learns to think independently of the news. Instead of “chasing” the news, reacting to whatever is the hot event of the day, he learns to anticipate the news.

So, what does this tell us about Cyprus?

Those of us who, a decade ago, were warning of a coming economic collapse, did not look into a crystal ball or throw a dart at a board to arrive at our prediction. The prediction of an economic collapse was based upon the direction that was then being taken by the world's governments and financial institutions. Predicting a collapse was really little more than studying what has happened throughout history when nations have set themselves on such a path, then extending the timeline out to its logical conclusion. A decade ago, whilst the majority of people were “chasing the dailies” (i.e., focusing on the boom times) contrarians were projecting out the long view as a consequence of present conditions, rather than a continuation of present conditions.

If we had taken the time to project the logical outcome of reckless loans by financial institutions (with the support and complicity of governments) ten years ago, we would have predicted the following series of events:

The above series of projected events may provide an overview of the future, allowing us to prepare ourselves both geographically and economically. The above synopsis tells us first that we should not wish to be living at the epicentre of what will in the not-too-distant future be a political and economic bomb site. It also tells us that, at some point, we will want to have as much of our wealth outside of banking institutions as possible. First, we will want it removed from banks that are located in the various epicentres; later, we will want it removed from any bank, anywhere.

About a year ago, I began to suggest that it was time to begin the removal of all money from banks in Europe and North America. For those who lived in those locales, I recommended that only three months' expense-money remain in a chequeing account. All other accounts, gold certificates, safe deposit boxes, etc. should be done away with. When 2013 arrived, I suggested that it was time to do the same with regard to banks generally. If I am correct, at this point, it is unwise to retain wealth in any financial institution anywhere. For the sake of convenience, it is useful to keep a bit of expense money in a chequeing account, but only that amount that the depositor can afford to lose if a sudden event were to cause that money to disappear.

Cyprus is only the first domino. There will be others.

The first outright theft by bankers that was sanctioned and even demanded by the world's leaders has now surfaced, but the writing has been on the wall for some time. As has occurred, one of the more beleaguered countries of Europe was likely to go first, but other dominoes will surely follow – just as surely as the contamination will spread across the pond to North America. The fact that the tipping point began in Cyprus, rather than, say, Greece or Spain, is incidental. Of all the dominos slated for demolition, it is unimportant which country was the first to set the dynamite charge at its foundation. The end result will be contagion, as all other options have, predictably, failed.

As investors, if we are to do well, we must concentrate on becoming a giraffe, as visionary investment advisor Harry Schultz used to say. We need to get our heads up to a height where we can look at the overview of the situation, see the landscape below us, and know what's coming in the broad sense. This gives us an understanding of the events to come. What we see on the news still has a value, as it informs us as to the timing of those events. We can use the “dailies” to keep score, in a sense, of what we already know is on the way. If we do this well, events such as the recent ones in Cyprus come as no surprise. They simply tell us to look ahead to the next domino to await its fall.

By so doing, we can plan ahead when to make our moves – to make them before the events occur, instead of “chasing the events.”