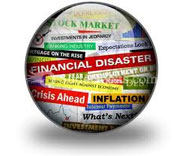 Ten years ago, the countries that, at one time, made up the “Free World,” were on a romp of spending to beat the band. At that time, many even regarded the spree as a “bull market without end.”

At that time, a small number of forecasters predicted that there would be a real estate crash, followed by the first stock market crash, followed by government intervention to “save” the economy. These developments would, very likely, be followed by a crash in the bond market, a further, more serious crash in the stock market, dramatic inflation (possibly hyperinflation), and, in due time, a collapse in the euro, the dollar, and, very likely, other currencies.

At that time, since the party was in full swing, those who offered these forecasts were, generally speaking, considered, at best, “Chicken Littles” (we heard that one a lot), or at worst, subversives.

It was hoped by some in this small group that, once the various dominoes began to fall, the general public would realise that they had been fooled, that all the promises that had been made by their various promoters and governments were disingenuous.

At that point, the public would turn to those who had forecast correctly and say, “You were right. Where do we go from here?”

I regret to say this, but I'm afraid I tend to be a bit more cynical. I did not believe that this would be the outcome. Instead, I expected that the vast majority of people would continue to look to their governments – the very people who caused the problem in the first place – to sort it all out. And, of course, each year we have heard promises from these governments of “green shoots” of one type or another that would put everything right.

At this point, the Great Unravelling has reached a point that the average person is now becoming quite worried at the endless empty promises; yet, incredibly, the horse keeps returning to the burning barn for safety; i.e., he keeps hoping that his government will somehow provide a solution.

The Chicken Littles are Correct

To be sure, there has been a small percentage who have come to the conclusion that the Chicken Littles were correct, and that, incredible as it may seem, the sky (or at least the economy) truly is falling.

Today, the Internet is filled with information on the projected eventual outcome of the Great Unravelling, and the opportunity exists to be more informed than ever before as to where the state of things will be in just a short time. Yet, even those who are now coming to believe that the situation will get much worse before it gets better, often comment, “Do you really think it can get that bad?”

The best response I have heard to this question has come, not surprisingly, from Doug Casey, who, for several years has replied,

“The coming Greater Depression is going to be even worse than I think it is.”

In recent years, I have heard, from quite a few people who have encountered this comment from Doug, “Well, now he's going overboard. If he really thinks it's going to be worse, why doesn't he describe in what way it will be worse? Obviously, he's exaggerating.”

I would strongly disagree. To date, I have never heard Doug's comment defended, and perhaps it should be – not for his sake, but for the sake of those who don't understand what the statement implies.

Those who offer forecasting on the Great Unraveling, speak of market crashes, governmental defaults, exposed sales of nonexistent gold by banks, monetary devaluations, plus a host of potential knock-on effects, such as commodity shortages, squatters' rebellions, tax revolts, etc. Whilst the general frameworks of these potential occurrences may be analysed and described, the details are far from predictable.

As an example, I have, in recent years written of a potential food crisis (here and here), detailing possible scenarios as to how such a crisis might play out. Whilst I consider this to be a likely occurrence in the not-too-distant future, the actual blow-by-blow outcome is anyone's guess. In addition, such a crisis would trigger numerous knock-on events that I am certain even I don't see coming.

Anyone who has ever experienced a full-scale city riot first-hand, will know that, above all, they are unpredictable. Whilst some events can be expected, other events appear that are not only sudden and surprising, but often completely illogical and even self-destructive on the part of their perpetrators.

“The Worse it Gets, the Better it Is.”

The above quote is attributed to Vladimir Lenin and, politically speaking, he was quite correct. The worse a panic situation becomes, the more justification the State has to “solve” the problem, including declaring a national emergency in which the rights of the people must be “temporarily” suspended. (Once rights are taken away, they are rarely reinstated.)

This quote is from Winston Churchill and has, more recently, been attributed to Rahm Emanuel, a reminder that, whatever the generation, the principles for successful political control are the same.

It is the norm for governments to both create events for their own benefit, which result in crisis, and then to use the resultant crisis for whatever new level of control is presently on the drawing board.

As an esteemed colleague commented to me recently,

“My study of history is that situations get worse progressively and then eventually degenerate quickly towards a really bad scenario.”

Both my colleague and I strongly believe that we are nearing the “Acceleration Phase” of the Great Unravelling, a time when major events will occur with increasing velocity.

This publication and other similarly-minded publications seek to provide insights as to how events will play out and what the reader may do to prepare himself and, hopefully, actually prosper within it.

As a general rule, it may be useful to assume that, whatever the reader presently imagines is likely to occur in this period, the reality is likely to be worse – unpredictably so. If he follows this assumption and it proves incorrect, he has lost nothing. However, if he is correct, his likelihood of surviving the crisis well will be greatly increased