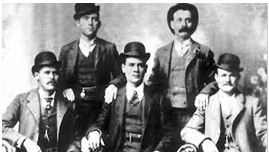 This 1901 photo shows what appears to be a group of respectable businessmen.

Some, however, may recognise this group as Butch Cassidy's Wild Bunch, who, although by all accounts were gentlemanly in their escapades, were highly successful robbers. It may well be that their success was attributable to the fact that they were quite business-like in their approach to robbery.

Today, we have a clear parallel in the central bankers of the world. Through a close marriage to the governments of the countries in which they operate, the central bankers of today have been elevated to a position in which, if they are not actually above the law, laws are rewritten to legalise their exceedingly unethical objectives.

In early 2013, when Cyprus announced that it had executed a “bail-in” of depositors' funds, we predicted that the Cyprus bail-in, far from being an isolated case, was intended as a trial balloon, that bail-ins would later be imposed in Europe, then the US.

Now, the EU has proudly announced its plan for an EU bail-in, which will come into force in one year and take effect in two years. Gunnar Hökmark, who steered the legislation through Parliament, proudly stated, “We now have a strong bail-in system which sends a clear message that bank shareholders and creditors will be the ones to bear the losses on rainy days, not taxpayers.”

So, there's clearly nothing to worry about. The problem is solved and only the shareholders, bond holders, and depositors will lose… all of their deposits over €100,000 (US$138,000.) Those who do not possess savings of over €100,000 will lose absolutely nothing.

Unfortunately, there are two niggling problems with this wondrous “solution.” First, it assumes that it's perfectly all right for the bankers of the world, who were largely responsible for the current economic disaster, to steal the savings of its depositors. Second, it sets a date of implementation at two years away—hardly the sort of date that would be set to solve an emergency, which is why the banks claim the theft is necessary.

Essentially, what this says to the public is that, henceforth, no one in the EU will be allowed to keep more than €100,000 in the bank, another way of saying that “wealth” will not be tolerated. “There's no hurry, folks, we're just putting you on notice that the middle and upper classes are to be eliminated.”

As we advised earlier this year, Canada has passed similar legislation, but they chose to hide it in their 2013 budget. The news was never reported in the media.

However, US citizens who are reading this may wipe their collective brow and say, “Thank God, it doesn't include us.”

But, again, as we postulated earlier, the bail-in is intended for the US as well. Once it has sunk in that such a move is perfectly acceptable in Europe, the US will declare its own bail-in policy.

Those who still cling to some hope that there may be some good news here, may say, “Well, at least if I have less than €100,000 on deposit, I can still call that my own.”

These folks will be the same ones who are relieved that they are likely to be left out of a “one-time” wealth tax that is currently being floated as another solution to the exorbitant operating costs of governments.

However, any government that steals your money once is likely to have another go at a later date. And another and another.

“One time only” taxes have a way of repeating again and again.

Once they are accepted at all—for any reason—governments tend to repeat them. They eventually become the norm. Even the income tax in the US started as a “temporary” tax.

Further, governments have a way of lowering the bar as to who is affected. For both the bail-in and the one-time wealth tax, once governments have blown through the public's savings, they will need another injection of monetary heroin soon enough.

Of one thing we can be assured: Governments will not, under any circumstances, decide to decrease the size of government. Nor will the legislators decrease the emoluments and benefits they receive. Once the people of the European and North American countries have been downgraded to a single class of serfs, they will not be allowed to rise up again to the point that they have the economic power to be self-determining in their lives.

Regular readers of this publication will be very familiar with the many responses from their peers who write in, saying, “This internationalisation idea is fine for those who have wealth, but what about me? I don't have enough to finance my relocation. I'm stuck here, no matter how bad it gets.”

Quite so. For those who are already in the serf class, an exit from the system may well be economically impossible. Once the middle and upper classes are eliminated, the collectivist pen will be complete, and the sheep that are captive within will be ready for the shearing.

The bank robbers of a century ago have been replaced by the robber banks. And their partners, the governments, have unquestionably rolled out the red carpet for them to steal your wealth with impunity.

For those who still reside in such countries, there are essentially three choices:

This is a “limited time offer” as the old television adverts used to say. Once the laws are in, the offer will end.