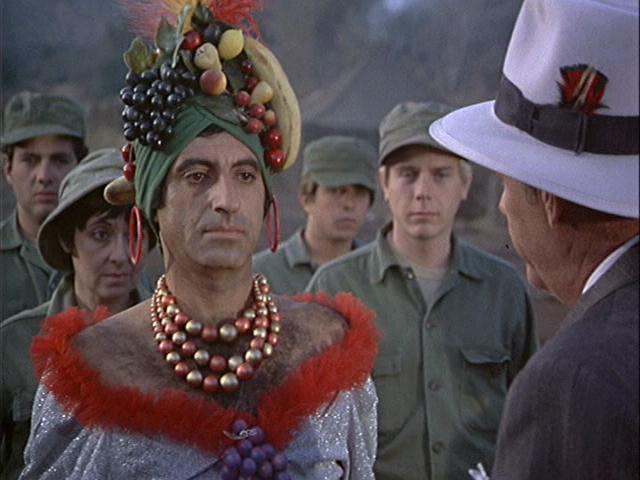 Here we have a photo of Corporal Maxwell Klinger, a character in the American television comedy, M.A.S.H., filmed in the early 1970’s.

The Klinger character was written as a soldier in the Korean War, who hoped that, if he became a transvestite, he’d qualify for a Section Eight discharge and would be sent home. In this photo, Corporal Klinger was taking part in a troop inspection.

In the early 70’s, America was still involved in the Viet Nam War. The liberal press graphically covered that war and its travesties – to the point that a majority of Americans became sick of the seemingly endless (and pointless) conflict and thoroughly sympathized with the Klinger character.

But, make no mistake about it: Corporal Klinger was an anarchist.

He did not desert on the firing line; he was not violent to his superiors; he simply dressed in an entertaining series of female outfits in order to be classified as insane, so he could be allowed to go home.

His superior, Captain Pierce, sympathised with Klinger’s effort, often commenting something to the effect, “Do I think he’s insane? Only if it’s insane to object to having your government send you half way around the world in order to get shot at.”

But the 70’s were different times. Back then, the media were not owned by the same corporations that were profiting from the war.

There will also be no news broadcasts that expose the US government creating and funding rebel organisations such as ISIS – that create chaos that the US must then come in and “control.”

If the American people were to receive such news on their televisions, they would today be asking meaningful questions as they did in the 70’s, such as, “How is it possible for the US, the greatest military power on earth, to invade a country like Afghanistan, fighting against disorganized sheepherders for sixteen years, spending three trillion dollars doing it, and not gaining any ground whatever – in effect, being no further ahead than when they started?”

And how can returning veterans of that war be treated by Government as being potential terrorists - classified as “threats to democracy” upon their return?

The American media of today does not present these questions to viewers and they shall not do so in the future.

But, what of the anarchists?

Of course, when we think of anarchy, we think of groups like the SLA (Symbionese Liberation Army), who, at the time when M.A.S.H. was being aired, were a small group of people who armed themselves, robbed banks, kidnapped and killed people in the name of “liberation.”

The SLA were not, in fact, terrorists; they were a small gang of thugs. They were annihilated by the Los Angeles police, in a shoot-out and conflagration, and justifiably so, as they had violently aggressed against others without provocation.

Today, we incorrectly see groups like Black Lives Matter and Antifa as anarchists and, of course, we’re encouraged to view them in this light, as they’re groups that use force in order to terrorise others.

Presented in this light, we could be forgiven if we regard anarchists as “evil people who wish to destroy us.” Of course, we would oppose their activities and even their existence. They represent force, violence and intimidation.

The trouble is, “anarchy” is being misrepresented by both governments and the media in order to assure that the citizenry is compliant.

What these true definitions represent, therefore, is, “leave me alone to live my life as I choose. As long as I don’t aggress against others, my liberty should be respected.”

Of course, this was the primary principle of America’s founding fathers – that the US would be a republic – a state of rule in which the rights of the individual are of paramount importance – not the will of leaders, or even the will of the majority.

And, in M.A.S.H, we have Corporal Klinger defending that inalienable right. He’s a classic anarchist – a draftee into a system that he does not believe in. He offers no force, he simply states, in a peaceful manner, that he does not wish to participate in his government’s invasion of a sovereign nation halfway round the world.

The fact that he does so through a comical manner makes his anarchy no less valid.

During America’s involvement in the Viet Nam War, peace activist Charlotte Keyes wrote an article entitled, “Suppose They Gave a War and Nobody Came?”

The title became a minor anthem thereafter. Its supporters were anarchists – people who suggested that governments can create all the aggressive foreign adventures they want, but those who are being invited to become the cannon fodder in those adventures should be able to choose not to participate.

And, they should have every right to do so.

Centuries ago, leaders rode the horse that was at the head of the charge, followed by any who wished to arm themselves and fall in behind the leader.

Today, that’s decidedly not the case. The entire world is a grand chessboard, as Zbigniew Brzezinski has so eloquently described it, and political leaders never see the back of a horse. They, instead, provide for themselves the safest of perches upon which to sit, whilst they send out the gullible citizenry to do battle. They fund their wars through taxation - the fruits of the labour of the people they are elected to represent.

The people of a country pay the price with their earnings and their blood. The leaders take no personal risk, but are the recipients of the spoils.

Not surprising then, that they do all they can to discredit not only the anarchist, but the very concept of anarchy. To the American founding fathers, the anarchist was respected for his reasoning and his courage.

With or without the dress, the anarchists of today are equally worthy of our respect. They represent the voice of Liberty just as much as they did in 1776.