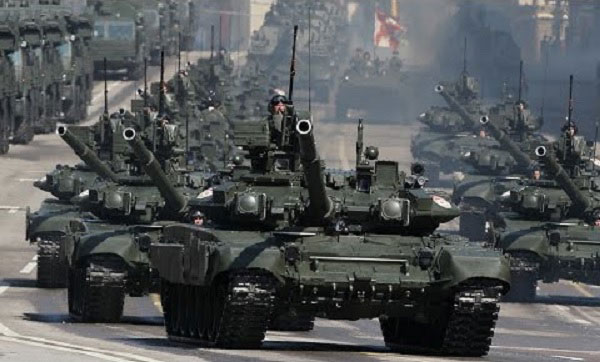 “Operation Barbarossa” was the code name for Nazi Germany’s invasion of the Soviet Union in 1941.

It was the largest military operation in human history.

The Nazis had already conquered most of Europe. Hitler had grown overconfident from his recent military victories. Now he was hunting for big game… Stalin’s USSR.

Throughout history, many European invaders, including Napoleon, suffered monumental defeats when they took on Russia. Despite this, Hitler thought he could succeed where they had failed.

The idea was to inflict a total defeat on the Soviets in a matter of months, before the notoriously brutal Russian winter began.

At first, it looked like the Germans might succeed. The Soviets were taken by surprise and were disorganized.

But those initial victories wouldn’t be enough. Thanks to stubborn resistance and a seemingly inexhaustible supply of Soviet troops, Operation Barbarossa stalled.

The Germans didn’t make it to Moscow before winter. The ruthless cold weather would prove to be a far more effective weapon than anything in the Soviet arsenal. Hitler’s hopes of quickly taking out the USSR perished in the brutal cold. It ultimately turned the tide of the war against Germany.

But the Soviet victory cost millions of lives. By the end of the war, the Soviets had lost over 20 million people. Some estimate they lost many millions more. By comparison, the U.S. lost around 400,000 people.

So, it shouldn’t be surprising that the Russians get a little prickly when a foreign military starts marching toward their borders.

And recently… for the first time since Operation Barbarossa, German tanks are once again advancing on Russia’s border.

You probably haven’t heard this extraordinary piece of news. That’s because the mass media has basically ignored and obscured it. They’ve been busy covering far more important things… like transgender issues and Kim Kardashian’s latest stunt.

That’s why I want to tell you about Operation Anaconda 2016.

It’s the largest war game in Eastern Europe since the end of the Cold War. It’s essentially a rehearsal to secure a quick NATO victory in the event of war with Russia.

It was launched from Warsaw, Poland, recently and involves 31,000 NATO troops.

Operation Anaconda 2016 is one of the most important stories you’re not hearing about. It shows how perilously close the world is to another global war.

I found out about Operation Anaconda 2016 while in Warsaw with Doug Casey earlier this year.

(Incidentally, Poland is one of the cheapest, enjoyable countries I’ve ever been to. A 30-minute taxi ride from the middle of Warsaw to the airport is only $5. You’ll be hard-pressed to find an entrée in one of the nicest restaurants for over $15.

Poland does not use the European currency, the euro. It has its own currency, the zloty. And the zloty’s weakness is a big reason Poland is so inexpensive today. By the way, “zloty” means “gold” in Polish. But the currency has no tie to gold. It’s just a paper currency, like the dollar and euro are.)

Whoever believes that a symbolic tank parade on the alliance’s eastern border will bring security is mistaken. We are well advised to not create pretexts to renew an old confrontation.

Although Steinmeier said Operation Anaconda 2016 is symbolic, he failed to mention exactly what it symbolizes.

First, an anaconda is a giant snake. It kills its prey by squeezing it. From the Russian perspective, they’re the ones who feel squeezed. This is precisely what the U.S. has been doing by fomenting so-called colored revolutions in Ukraine and Georgia (both on Russia’s periphery) and trying to absorb them into NATO.

(Doug Casey: It’s provocative, and actually quite insane. The Western media paints the Russians as the aggressors, which—let me shock you by saying this—is the opposite of the truth. Russia is an economic minnow, producing nothing but oil and gas, and mostly unprofitably, at current prices. Its population is in permanent decline, and it’s actually a disintegrating empire with a dozen secession movements. Its only serious industrial sector is manufacturing weapons, but even the most advanced Sukhois and MiGs (like the F-22 and F-35) are artifacts of a bygone era. The Russians aren’t in a position to threaten anyone—entirely apart from the fact that conquering neighboring countries no longer makes sense. In today’s world, you’re no longer acquiring an asset to be looted, but taking on a liability.

As for NATO, it’s outlived its usefulness by over 25 years. The huge military bureaucracy is just a hammer in search of a nail. It should be abolished before it gets everyone in a lot of trouble.)

Russian President Vladimir Putin has reacted to Operation Anaconda 2016 with alarm. At a recent press conference, he warned Western mainstream media journalists that the world is sleepwalking into World War 3, saying:

We know year by year what’s going to happen, and they know that we know. It’s only you that they tell tall tales to, and you buy it, and spread it to the citizens of your countries. Your people in turn do not feel a sense of the impending danger—this is what worries me.

How do you not understand that the world is being pulled in an irreversible direction? While they pretend that nothing is going on. I don’t know how to get through to you anymore.

U.S. politicians like to use Putin as a piñata to show how tough they are. Hillary Clinton has declared Putin to be the new Hitler. This is the kind of thinking that fueled Operation Anaconda 2016.

Now, we’re not referees charged with deciding which political players are good guys and which are bad guys.

However, the portrait of Putin as a Hitler or a crazy man leading his country toward disaster—the picture you get from the mainstream media and from many politicians—is suitable only for propaganda posters.

I don’t give two you-know-whats about what happens in Eastern Europe, except to the extent it might spark World War 3 and cause us to get vaporized in a nuclear exchange.

Editor’s Note: It’s always been true, as Bourne said, that “war is the health of the State.” But it’s especially true when economic times get tough. That’s because governments like to blame their problems on outsiders; even an imagined foreign threat tends to unify opinions around those of the leaders.

Since economies around the world are all weakening, and political leaders are all similar in essential mindset, there’s good reason to believe the trend toward World War 3 is accelerating.

Unfortunately, there’s little any individual can do to practically change the trajectory of this trend in motion. The best you can and should do is to stay informed so that you can protect yourself in the best way possible and even profit from the situation.