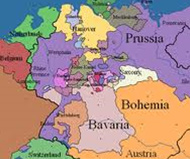 The world is abuzz over Crimea. 95% of the Crimean people recently voted to reconnect with Russia after a twenty-three-year hiatus. Although Crimea had been Russian for over 200 years, Western powers hollered “foul!” over the re-unification.

In addition to Western pundits commenting nightly that such an occurrence is an international disaster, the world seems to be taking up sides over the possibility that any other former Russian territory may also choose to re-unite with Russia, and sabres are already rattling all round.

We tend to forget that, although the world map has looked more or less the same since the end of World War II, it has been the norm, throughout history, for large parcels of property to change hands fairly often. Boundaries move. Countries become larger, smaller, or disappear altogether. Large empires are created, swallowing up smaller countries, sometimes lasting for 200 years or more, then inexorably breaking up into smaller remnants.

Certainly we are heading into a period of dramatic change—economic change, social change, and certainly political change. Whenever such a period occurs in history, changes in the lines on the map inevitably also occur. And, although no major changes have taken place recently, early rumblings can be heard all over the world.

Venetians send €71 billion to Rome annually, yet only €50 billion returns in services and investment. As they have become “tired of supporting the poor and crime-ridden south,” 89% of Venetians have recently voted to create their own sovereign state. Following the vote, Venetians declared independence from Italy. Already, this decision has sparked an interest in Sardinia to have a referendum. Discussions are afoot for Lombardy, Trentino, and Friuli-Venezia Giulia to possibly join them.

Scotland was an independent country until the 1707 National Referendum, when it became a part of the UK. However, in September 2014, they will vote to decide whether they will leave the UK and become independent. The UK has, since the 1950s, taken a passive position in relinquishing its colonies, and the majority of them have gone independent since then. However, if a colony (now called a British Overseas Territory) wishes to remain a colony, the UK firmly defends that choice. This “let the people decide” stance is extremely admirable and may well be unique in the world.

Spain lost Gibraltar to the UK in 1704, and they want it back. Understandably, Gibraltarians have a great deal more faith in a tie to Britain than to Spain. The Spanish would also like to have Andorra once again. To add to the drama, Spain is having problems over Catalonia and the Basque provinces.

Across the Atlantic, sabres are also being rattled in Argentina. President Cristina Fernández de Kirchner seeks to retake the Falkland Islands, despite a recent overwhelming (99%) vote by Falklanders to remain a part of Britain (and despite a decisive victory by the UK only 30 years ago over the same islands).

In much of the world, small countries are hoping to retain their independence, whilst portions of larger countries are trying to establish their independence. Understandably, they're meeting with resistance, as it's usually the areas that are the net-contributors to the larger economy that seek independence, whilst the areas that are the net-recipients wish to take the conglomerate approach (and to continue to eat their neighbour's lunch).

This is evident even in the US, where those states that are net-contributors are experiencing the same frustration as Venetians and are making noises about secession. Not surprisingly, net-recipient states have no desire to secede. The central government, of course, has a singular goal, and that is to continue to dominate them all. This particular conflict is in its earliest stages, and it will be some time before we see whether secession in the US gathers any real momentum.

A move to break away is invariably a bottom-up effort—created by the people. A move to create a conglomerate state tends to be top-down—created by the political class. Political leaders invariably have an insatiable appetite for gobbling up as much real estate as possible. In other ages, this was almost always achieved through warfare, but today, this is increasingly being attempted through treaties with other political leaders.

The US is most certainly the original model of this type of agreement, and since 1992, much of Europe joined together in a sort of “United States of Europe.” This hasn't worked out too well at all, but that hasn't stopped political leaders elsewhere in the world from wanting to imitate the European leviathan.

Each of these groupings follows the EU model to a greater or lesser extent, and in each case, the “unification” is desired, not by the public, but by the political leaders.

In South America there are a myriad of organizations: Mercosur, Unasur, the Andean Community of Nations, ALBA, CELAC, and others. Each country, save poor Suriname, seems to have multiple memberships in the assorted organizations. If some of the associations seem contrived and even arbitrary, they are. All of them are attempts to maximise the level of power through association. Some of the relationships are acrimonious, as each nation strives to maximise its own importance.

To this, we can add the famed BRICS and ASEAN, also notably top-down alliances.

What we see here is the desire by political leaders to construct conglomerates that are as large as possible, whilst the general populations seek to create smaller, more manageable entities. Clearly, the smaller model provides the greatest potential for self-governance (as in the Cantons of Switzerland) and limitation of the size of government, together with a greater opportunity to create economic competition between states.

But, of course, this is the absolute antithesis of what provides power and control to the political class. So, what will the outcome be: the end of the nation state, as libertarians would hope, or something akin to George Orwell's Eurasia, Eastasia, and Oceania?

It may well be that neither will be fully realised.. Human nature being eternal, the world will always have the libertarians on one end of the spectrum and the dominators on the other. The struggle will be unending, and we shall continue to see empires and associations rise and fall, whilst smaller nations break away at intervals.

The real question is how we choose to deal with this eternal condition. Do we as individuals take comfort in being a part of a conglomerate, with its promise of full equality, security, and cradle-to-grave care, regardless of how insincere (and impossible) that promise might be, or do we choose the smaller, more independent state, with its goals of productivity, greater opportunity, and self-determination?

If the latter, we should examine such smaller states and those that are emerging. Some, like Hong Kong, Andorra, and the Cayman Islands, are well-established. Others, like Venice, bear watching, for they may provide the future of free-market self-determination.