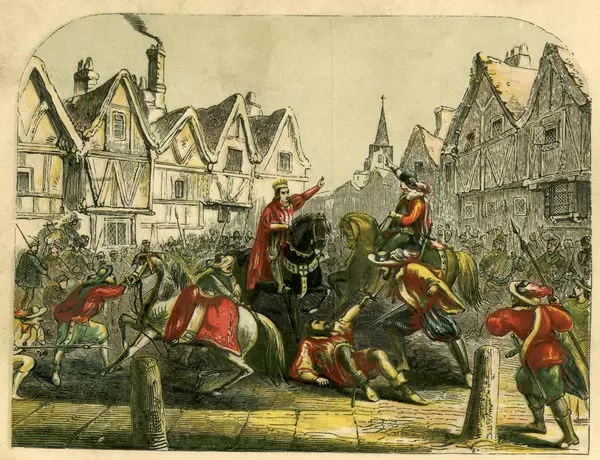 In 2016, James Delingpole commented that toffs hate Brexit because it’s the Peasants’ Revolt.

For non-British readers, the word “toff” is a shortened form of “toffee-nosed,” a slang term for the rich or upper class. But more important is the reference to the Peasant Revolt of 1381, which is little-known on the western side of the Atlantic.

In fourteenth century England, the cost of ongoing warfare placed politicians in a situation in which they either had to concede the war, cut their own emoluments, or increase taxation significantly. As politicians always do, they chose the latter.

Revenue from the resultant poll tax proved to be less than anticipated, as large numbers of people found ways to evade the tax. The tax commissioners were then given wide latitude in the methods they chose to facilitate collection.

As is almost always the case, whenever authorities are given too much latitude, they use it abusively.

In May of 1381, the authorities confronted the people of Brentwood, Essex. The people were unanimous in their anger toward the authorities, as they already considered the tax to be an abuse of authority. In a confrontation attended by hundreds of citizens, a shop owner, Thomas Baker, announced to the commissioner, “All of these folk have already paid their taxes. You won’t get a penny more from them.”

The commissioner then ordered the arrest of one hundred people chosen at random. But outnumbered, the authorities were driven back. Reinforcements were brought in the next day. But by this time, more peasants had joined the previous day’s group, and armed conflict ensued.

Six of the authorities were beheaded. At this point, there was no turning back. The peasants had a taste of freedom and would not give it up easily.

Word got round the county, and riots spread quickly across Essex and beyond. Coded messages passed from one community to another were the fourteenth century’s equivalent to the internet today, in that it was the quickest way to anonymously pass information between those who resolved to rebel against the powers that be.

Protesters were arrested in several counties, and only eight days after the first incident, the rebels had organized well enough to create an assault on Rochester Castle in Maidstone, Kent, to free their compatriots.

In this short time, they had already become organised enough to form militia groups and create a small crusade. Importantly, the peasants had been joined by many from the middle classes, who had also been subjected to the poll tax.

Within two months, they numbered in the thousands, and riders from counties surrounding London simultaneously launched an attack on the capital. By the time the rebels reached the Tower of London, they were 60,000 strong – half again the population of London.

At the time, the British army were overseas, waging war on France. The king and his ministers had never anticipated a rebellion and were caught unprepared. They were holed up in the Tower, where they would likely be safe, but the guard were not sufficient in numbers for the king to leave safely.

When the rebels crossed London Bridge and entered the city, they simply took over, as, even though they were not well-armed, they were too numerous to control.

It’s important to note that a key to the success of the rebellion was that it cut across social classes. The poll tax was paid by all classes, and even those who didn’t join the rebels, in many cases sympathized with them, including the soldiers, many of whom switched sides.

When the rebels arrived at the Tower, the drawbridge had been lowered and the king accepted defeat. Significantly, the rebels’ primary focus was Simon Sudbury, who was at that time the Archbishop of Canterbury, the Lord Chancellor of England, and the head tax collector. He was taken and executed with no resistance from the king. The rebels then presented their demands, which were:

The king, having no wiggle room, signed a charter agreeing to all terms under the sole condition that his personal rule be undiminished – a condition that was accepted.

If this were the end of the story, it would be a great tale of David and Goliath, or as stated in the old Texas Rangers’ motto, “Little man whip a big man every time, if the little man’s in the right and keeps a-comin’.”

But of course it didn’t end there.

After the king had acceded to all demands, the rebels disbursed. Once they were down to just a few hundred in number, they were set upon and killed. The tax was repealed, but none of the freedoms that had been promised were delivered upon.

And as incredible as it may seem, that was the end of the matter. Once life was merely tolerable again, the people of England caved in and accepted subjugation to the king. Once the tax was gone, they abandoned their quest for more meaningful freedom.

Why is this story pertinent now? Well, Britain is again deeply in the hole economically, and there is no way out except to get the crash over with, live with a crisis for a period of years, then begin a recovery. This is something that politicians worldwide never choose to do. They will always choose to ride the problem into the ground, making the problem worse but buying themselves months, or possibly a few more years, in office.

Worse, Britain has come under the subjugation of the EU. A rebellion in the form of the Brexit Referendum has taken place, and the rebels have won. The government then fully agreed to create a Brexit agreement.

Then they pulled the switcheroo, as in 1381. Once the “peasants” had been placated and put down their pitchforks, government created an agreement that is in no way a Brexit. The agreement removes EU rights from Britain but continues to enslave Britain to the EU. Interestingly, in the midst of all the rhetoric on British television as to whether it’s a good deal or a bad deal, no one seems to have gotten around to stating, “But this agreement isn’t a Brexit at all. It’s a perverse form of remain.”

As this charade plays out on the nightly news, we shall find out what the state of the UK will be when the dust settles. However, we should take this time to recognize that Brexit was a twenty-first century form of the Peasants’ Revolt – a time when the population had the government running scared but made the mistake of accepting the continued leadership of those who created the problem in the first place.

Whatever country we are from, we should be reminded that, no matter how reasonable or conciliatory this may seem, putting the fox back in the henhouse is never the answer.

Editor’s Note: Whether it’s in the US or across the pond in the UK, this trend will only accelerate. Governments in economic trouble will always choose to squeeze their citizens with ever increasing taxation and money printing.

However, opportunities to protect and preserve your economic freedom still exist. We’ve eliminated the guess work and found an ideal solution that will help keep your savings safe... even during the worst of times. Click here to find out more.