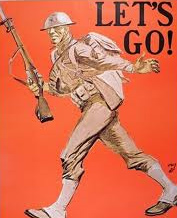 Recently, an associate offered the following observation with regard to the likelihood of war in the immediate future:

“The big guys like to play chess with the world. It's the biggest game. The bankers need ups and downs and wars to make money. The military needs wars to exist. The politicians need both to exist.”

Whilst he was reiterating a concept we have discussed on many occasions, it occurred to me that I have never seen the subject defined so succinctly, nor so informatively.

Let’s break it down:

The bankers need ups and downs and wars to make money

Just as bankers increase their profit as a result of upward and downward economic fluctuations, so, too, do they benefit from war. It is not unusual for a given bank to finance those who would create armed conflict, and indeed, they sometimes bankroll both sides. Whilst banks have other means of making money, war is often more profitable than conventional banking.

The military-industrial complex is in the business of selling armaments to governments. Although armament sales may tick over nicely in peace time, they boom in war time. Therefore, any armament supplier will benefit from war. It matters little whether it is an all-out war or a series of smaller ventures. The object is sales.

The politicians need both banks and war

This is true in the sense that politicians need both bankers and an active military to thrive. Political campaigns depend upon funding. Banks and armament suppliers have long been a major source of campaign funds for candidates of the primary political parties. (If each party is well-paid before the election, favourable treatment towards banks and armament suppliers is assured, regardless of which party wins an election.)

But there is further necessity for armed conflict with regard to politicians. First, it is a truism that a country rarely changes leaders during times of war, and nothing is more imperative to the politician than gaining a further term of office.

Second, nothing distracts the voting public like war. If a politician is receiving increased criticism from the voters, a good war can be counted on to get the voters concentrating more on the war than on the politician’s poor stewardship.

Third, governments typically remove the freedoms of a populace over time. Whilst citizens may object to the loss of their freedoms in normal times, they are often more willing to relinquish them “temporarily” in times of war, “for the good of the country.” Not surprisingly, lost freedoms are seldom reinstated after a war.

Consider the words of James Madison, the fourth US President:

“Of all the enemies of public liberty, war is, perhaps, the most to be dreaded, because it comprises and develops the germ of every other. War is the parent of armies; from these proceed debts and taxes; and armies and debts and taxes are the known instruments for bringing the many under the dominion of the few. In war, too, the discretionary power of the Executive is extended…. No nation could preserve its freedom in the midst of continual warfare.”

Generally speaking, the citizens of most countries would prefer to avoid war. After all, they rarely benefit from it. But then, the impetus for war is almost never generated by the people of a country. Unless a nation is actually attacked, in nearly every case, the people need to be talked into going to war.

A good example of this is the US, who, since World War I, have needed convincing on almost every occasion when political leaders proposed war. In World War I, the Lusitania incident was created jointly by the UK and the US to motivate them. In World War II, the goading of Japan was needed. In Vietnam, the trumped-up Gulf of Tonkin incident was needed, and so on.

Suffice to say that, when bankers, the military industrial complex, the politicians, or all three decide to instigate war, war will come to pass. Whether it is a conservative government or a liberal government, if a clear threat does not exist, one will be invented.

As Hermann Goering stated in the Nuremburg trials,

“Naturally, the common people don’t want war. But after all, it is the leaders of a country who determine the policy, and it is always a simple matter to drag people along, whether it is a democracy or a fascist dictatorship, or a parliament, or a communist dictatorship. Voice or no voice, the people can always be brought to the bidding of the leaders. This is easy. All you have to do is tell them they are being attacked, and denounce the pacifists for lack of patriotism and exposing the country to danger. It works the same in every country.”

At the present time in history, the countries of the First World have created the greatest pillaging of the state coffers that has ever occurred. As complacent as the peoples of both the EU and the US have been in recent decades, there does seem to be a growing understanding amongst the peoples that they have been scammed.

Aside from continuing quantitative easing until that scam also fails, the respective governments are running out of rabbits to pull out of the hat to distract the masses. It would therefore seem that there has been no time in history in which war was so needed by national leaders—both as a distraction to the populace and as a last squeeze at the monetary lemon, prior to the inevitable crash.

And so, what does that mean to the reader? Assuming he is not invited to take part, shouldn’t the drums of war be of little interest to him? Well, in terms of his own physical safety, that may well be true, but here is an historical fact to consider:

Any country that is considering waging war against another country should first consider that the loser is almost always the country that runs out of money first.

No venture is more costly than warfare. The EU and the US are bankrupt now. Those presently living in those locales may escape actual duty in the military, but they will unquestionably be expected to pick up the tab through taxation.

Those who presently feel that their obligations to their governments are already barely manageable might wish to consider what they will be, both during and after a major war.

In order to be prepared, sign up for free access to Doug Casey's International Man Communiqué by clicking here.