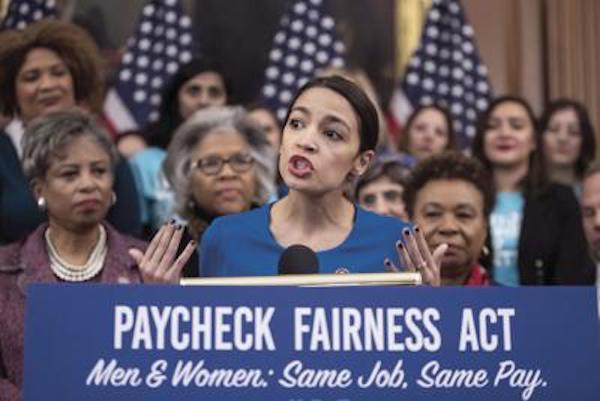 Traditionally, the Democratic Party in the US has placed its primary focus on the protection of the middle class. But, in recent years, it has taken a sharp turn toward racial identity politics, gender issues, and redistribution of wealth along socialist lines.

John Kennedy is out; Bernie Sanders is in.

Since the 2016 presidential election, this trend has become what can only be termed “rabid.” A new wave of socialistic candidates has been elected who tend to be entirely inexperienced in the political structure and woefully misinformed about what can realistically be achieved. A particular casualty has been basic arithmetic, as the new players toss out increasingly unworkable proposals, most of which are so impossible to fund that a fourth-grader could have worked out the numbers.

And yet, these same (largely) freshman congressmen and women are collecting the lion’s share of media attention, as they trot out each new proposal, much to the cheers of their supporters.

Although there are too many of these proposals to review, let’s have a quick peek at just three.

$1000 per month to every adult over age eighteen.

This idea is based on the concept that the new robotics will result in the elimination of millions of US jobs. This, of course, is a theme that began over one hundred years ago, when Henry Ford first created assembly lines, and has continued ever since. However, in the last century, the elimination of jobs by robotics has invariably created new jobs, allowing technology to evolve and new products to come to market.

Still the insistence amongst the proposers is that “this time it’s worse.” They insist that a universal basic income for all people, no strings attached, whether they’re interested in working or not, will eliminate poverty, yet will somehow not cause inflation.

This is not a new idea, but it has now come under the wing of the Green New Deal.

Also called, “Medicare for All,” this proposal is being pushed by most front-running Democratic candidates. As proposed, it would cost $32 trillion in its first ten years – so costly that even if existing individual and corporate taxes were doubled, they wouldn’t cover the costs.

Cost estimates vary for all the above, particularly the Green New Deal, but if they were all implemented, as has been recommended by many candidates, a bit of arithmetic would put the estimated annual cost per household at between $37,000 and $57,000.

That begs the question of, “How are you going to pay for this?” The answer, from political leaders has been that Big Business and “the rich” should be expected to pick up the tab, as it’s a part of their paying “their fair share.” Voters who would like to receive these benefits understandably like the sound of this, as it means even more free stuff, at others’ expense.

Of course, that will mean that taxes will need to rise, and rise dramatically. Proponent Alexandria Ocasio-Cortez has recommended tax rates as high as 70%, which would be the highest tax rate in the industrialised world. Another proposal calls for raising corporate tax from 21% to 28% – a 33% increase.

And yet, even then, the numbers don’t actually work. This would pay only a fraction of the total cost. The rest would need to come from the middle class. Without stating so, anyone who earns an average wage would, effectively, be classified as “rich.”

And, as history shows us, this is always the outcome of collectivism. The poor are never raised up to a higher standard of living. Instead, all citizens other than the ruling hierarchy are lowered to the poverty level, where they remain.

It’s safe to say that the political leaders will not succeed in passing all their proposals, but it’s also safe to say that, after an election that leaves the Left in the majority, substantially greater taxation will be on the way for Americans.

But, why so many draconian schemes… and why now?

Well, truth be told, the US has, in recent decades, gone from being the world’s foremost creditor nation to the world’s foremost debtor nation. The US government and bankers have created the largest level of debt in the history of the world. That bubble is overdue to explode, and in order just to continue to function, the US government will need to go to the last remaining monetary source that hasn’t been bled all but dry – the taxpayer.

The government is broke and, to make matters worse, is headed into a major war. Far more money is needed, and an excuse has to be created as to why greater taxation is a must.

Taxpayers are already very conscious of how excessively they’re being taxed, and the dramatic increases are a non-starter, unless taxpayers can be conned into believing that they’ll be receiving major benefits and that the lion’s share of the bill will be handed to the rich.

And so, the above schemes are not merely the harebrained daydreams of a few ditzy freshman congressmen. Massive taxation will come into being, and it will have received majority support in Congress, regardless of which political party is theoretically ruling the roost at the time.

This is not about ideology or party platforms. This is a last-ditch effort to buy a little more time in office – a last grab at the public’s piggy bank before the economic endgame.

Whether it will be acceptable to the electorate is not an issue. A major increase in taxation must occur.

Editor’s Note: Misguided economic ideas are advancing rapidly in the US. Socialism continues to grow in popularity among Americans. All signs point to this trend accelerating until it reaches a crisis... one unlike anything we've seen before.

That's exactly why Doug Casey and his team just released a video that explains how and why this is happening... and what comes next. Click here to watch it now so you can be prepared.

Heads I Win, Tails You Lose

True freedom has long-since departed the US.