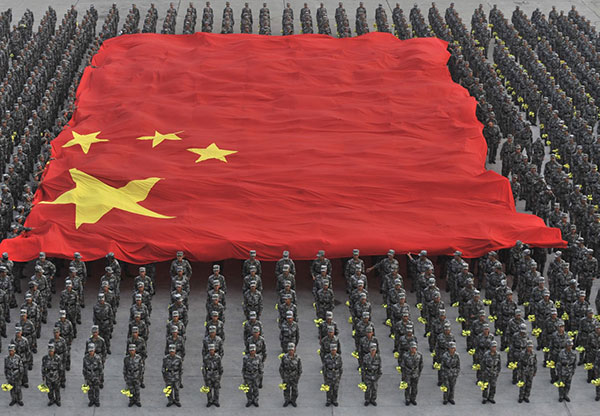 Nick Giambruno’s Note: Today, we continue our five-day series on US-China relations with an essay from Doug Casey. (Read yesterday’s here.) Below, Doug lays out basic differences between American and Chinese culture… and shows what these differences mean for the future of the two empires…

This article is entitled Chung Kuo, which means Middle Kingdom.

The Chinese have long seen themselves as superior to every other race (like almost every race does) and the center of the world. It’s because they were so confident of this that they never ventured out as Europeans did, with a brief exception in the 15th century when a gigantic Chinese fleet, composed of ships vastly superior to those of Europe, ventured as far as Africa. Since dropping the ball on world conquest back then, or at least exporting their culture wholesale, they’ve been in stasis, and on the receiving end of what Europe had to dish out.

The Chinese resent the “gweilo,” or “laowai” (loosely translated in Cantonese and Mandarin respectively as “foreign devil”) for appropriating places like Hong Kong, Macau, Shanghai, and numerous other enclaves. They resent episodes like the Opium Wars, which resolved whether they were to be used as a market for narcotics. They never learned to appreciate lots of foreign soldiers running around their countryside, even though Westerners felt it was a birthright.

Rent 55 Days at Peking for the conventional European view of imperialism during the Boxer Rebellion. Better yet, buy or rent The Sand Pebbles, in my opinion one of the best movies out there—and the book is even more entertaining and educational.

The Chinese absolutely resent the U.S. government parading its aircraft carriers off the China coast as if it owned the place. The U.S. government is not showing strength, it’s displaying arrogance and stupidity by antagonizing a sleeping dragon. And the thought of American politicians—which is to say an assortment of insular lawyers, eggheaded wannabe social engineers, and refugees from Arkansas trailer parks—negotiating with people who’ve been through what the Chinese have, is just scary.

The U.S. government may feel like it can call the shots now because it has a dozen aircraft carriers and a couple thousand fighter planes. But it’s making a serious enemy while it’s going to bankrupt America in a counterproductive projection of force to the other side of the planet. And that’s not all. Because the day will go to the people with the most wealth, not the ones that have the most expensive military hardware.

The Future in China

I can give you a dozen credible scenarios describing what might happen in China over the next couple of decades. But the trend that seems certain to continue is the rapid rate of wealth increase there. I don’t credit official figures with any great accuracy, but if we take them as being approximately right, then the U.S. economy is growing at 2%, and China’s at about 7%—but with a base of about four times the population. What this means is that the largest economy on the planet will soon no longer be America’s—but China’s.

It’s already been something of a psychological smack upside the back of the head for Americans to realize that they’re far less powerful than they were in the ’50s and early ’60s, when America was wealthier than the rest of the whole world put together. What will it mean when it’s only a fraction as wealthy as China alone?

Of course, the average American will still be living far more comfortably than the average Chinese; he’ll still have a bigger house, more gadgets, cars, and consumer goods. But he may actually have considerably less investment capital and savings. And there will be vastly more wealthy Chinese, and they’ll have vastly more wealth than wealthy Americans.

There are a number of reasons for this. One is that Chinese culture is ingrained with the Confucian work ethic, which is quite similar to the Protestant work ethic that helped the West get where it now is. The difference is that the West has become a group of flaccid welfare states, morally weakened by its own prosperity, pretty much as Joseph Schumpeter predicted. While I’m philosophically averse to believing that success must necessarily lead to dissipation, that certainly seems to be the historical record. And it also seems pretty clear that a society, a government, a corporation, or an organization of any type is pretty much like a human body in at least one way: As it gets older, it gets weaker and more corrupt, approaching its inevitable death.

Another element of Chinese ascendance is just the sheer number of people that share a common culture and language. Upwardly mobile Chinese all learn English, the world’s language, as well as Mandarin. So they can access everything from the West, but very few people in the West will ever learn Chinese, making it hard to reverse the flow.

Further, just as every other people from a given culture tend to prefer associating and doing business with themselves—Jews, blacks, Arabs, Irish, Italians, you-name-it—the same is true of the Chinese. But they’re an order of magnitude larger than most any other cultural grouping. From a financial point of view, it’s just arithmetic.

Actually the situation is even grimmer. The Chinese will probably work harder. He’s in an environment where, if only because of minimal regulation, he’ll make his capital grow faster. If Herrnstein and Murray are right in their book The Bell Curve, the Chinese guy is smarter (105 v. 100 average IQ for Europeans). And then, when the American dies, the government will take half of his piddling million dollars for estate taxes, so his kids start with no meaningful financial capital. And probably minimal intellectual capital, if the obvious dumbing down of American schools has anything to do with it. Meanwhile, the scions of the Chinese will have an untaxed $268 million, and probably a much better education and stronger work ethic to help them deploy it.

The situation was best summed up by my friend The Great Winfield, the famous commodity speculator, who, when I asked him how he was going to deal with the eventuality, commented “After I kick the bucket, I’m going to come back as a young, good-looking girl. That way, maybe I’ll get a rich Chinese boyfriend, and at least I’ll eat regularly.”

And I’m not overdoing the tax angle, either. The average American has been so brainwashed that he thinks he has a moral obligation to give the government whatever it asks for; he thinks he’s being dishonest and cheating if he puts his own and his family’s welfare above the demands of the State. At the same time, he thinks the State has a moral obligation to provide for his health, education, welfare, and retirement.

The average Chinese, however, recognizes the government as his adversary and feels no moral obligation at all towards it, only to his family. He knows the guy calling himself “the government” is just a successful warlord, and a successful warlord is just a major league criminal. He considers it his duty to deny resources to the State because he knows he can’t feed the beast and his family with the same grain of rice. And he has no concept of the State taking care of him; that’s something his family does.

Where will it all end up? In the short run, more of the world will surely resemble British Columbia, with its majority Oriental population. In the long run, the world portrayed in David Wingrove’s Chung Kuo novels, in which the Chinese dominate the world as thoroughly in the 22nd century as the Europeans did in the 19th, isn’t at all out of the question.