So, Trump has won the election. Of course anything can happen between now and his presumed inauguration on January 20. The Swamp Creatures tried to cause a recount in so-called Purple States that would have changed the number of electors in Hillary’s favor. They tried other ways to somehow influence Trump electors to vote for Hillary. None of this would have been an issue if Baby Bush II, Jeb, had been the Republican nominee, as was supposed to have happened. It all just shows what a transparent (a word these people love to use) fraud “democracy” has become.

Let the hoi polloi cast a meaningless vote, so they have the illusion of being in control. Instead of seeing themselves as subjects, they’ll think they’re “we the people,” who actually have some say in what happens. That way they’ll pay their taxes willingly, enthusiastically sign on to aggressive wars on the other side of the world against people they know nothing about, and generally do as they’re told. Because it’s supposed to be patriotic. “Democracy” is a much more effective scam for controlling the plebs than kingship or dictatorship.

That said, the Establishment, the Deep State, was genuinely shocked and appalled by Trump’s victory. As Baby Bush the First would have said, they misunderestimated how angry the average voter was. That’s because the Coastal Democratic Elite are totally out of touch with the common man. But they needn’t fret too much. They’ll be re-installed, with a vengeance, in four years.

That will likely be true for two reasons:

1. Simple demographics. The groups that vote Democrat (e.g., blacks, Hispanics, urban dwellers, immigrants, Millennials) are growing in numbers faster than those who vote Republican. Republicans are older people, and the Boomers (born 1946–1966) and the Silent Generation (1926–1946) are dying off. More people are moving to the cities, and that influences them to vote Democratic. More people (still, idiotically) are pursuing higher education, and that also influences them to vote Democrat.

2. The Greater Depression. One definition of a depression is a period of time when distortions and misallocations of capital are liquidated. A time when bubbles caused by monetary expansion are popped. A time when unsound businesses fail. I re-emphasize this because the party on whose watch it happens is automatically kicked out. So, the Democrats actually got quite lucky not to be in office when the time bomb goes off. Trump could easily go down as Herbert Hoover II.

What could change things? A serious war, much bigger than the sport wars the US is currently engaged in, is the biggest danger. That’s much less likely with Trump than Hillary, but these things have a life of their own. My guess for the next president is either a left-wing general (because Americans love and trust their military), or a left-wing populist, like Elizabeth Warren.

But that’s crystal balling at this point. Let’s proceed on the assumption Trump is actually going to be the president for at least the next four years. Although problematical, he’s a vast improvement over Hillary. What will it mean for the US and the world? More importantly, what will it mean for your personal finances and freedom? Let’s look at the possibilities.

Bonds—With bonds, we’re at the peak of the biggest financial bubble in world history. This is a very big deal.

Interest rates move in very long cycles. They went up from the mid-1940s to the early ’80s, when long-term government bonds peaked at close to 16%, and T-Bills at over 16%. I thought they hit bottom years ago, but the cycle overshot. 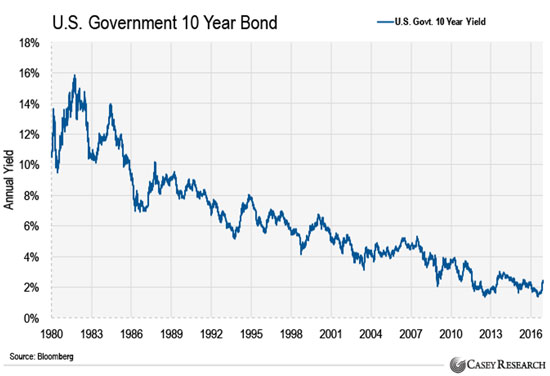 My guess is that they’re headed up in earnest now. And Trump, as someone who understands business (even though he doesn’t understand economics), will likely (I think…) do what he can to send them higher. Why? He understands the country needs to save, to rebuild capital. And higher rates will encourage saving and discourage debt.

The risk is that, with all the debt that’s been put on in the last decade, debtors will be hard-pressed to service it. That includes the USG with $20 trillion of on-balance-sheet debt, and a lot more in the way of off-balance-sheet debt, guarantees, and contingent liabilities. Much of it will be activated if higher rates cause a lot of defaults.

What should you do? Sell all your bonds.

Real Estate—Property, at least in the English-speaking world, floats on a sea of debt. Interest rates go up, real estate prices go down. The economy goes down, so do property prices. Add to that the aging US population, which isn’t good for property; as people age, they downsize. Add to that the fact we’re in another real estate bubble, similar to what we saw in the mid-oughts. After bonds, property is likely the worst place to be. In fact, I’ll go so far as to say the great post–World War II property boom is at an end—but that’s a subject for another time. There’s not much that Trump can do to fix this.

What should you do? Lighten up on property. Make sure any mortgages you keep are at fixed rates.

Stocks—If Trump only follows through with his promise to cut taxes, and eliminate two old regulations for every new one, it would be wonderful for the economy. But the economy and the stock market are two different things; they only correlate over the long run. I suppose he’ll follow through with his promise to build lots of new infrastructure. Government deficits will soar, and only the Fed will be on hand to buy all that new debt.

Infrastructure companies will get a fat slug of the newly printed money. But I find it hard to get enthusiastic for the stock market. In terms of dividends, P/E ratios, or book value, it’s already at one of the highest levels ever. Bear in mind that well-selected stocks can still go up, even if the market as a whole goes down.

That said, I feel more comfortable with shorts than longs at this point.

Gold and Commodities—Frankly, where do you put your money when almost everything is overpriced? Commodities are coming out of a five-year-long bear market. They’re about the only thing that’s cheap. That’s true relative to their cost of production (farmers, ranchers, and miners are breaking even, at best, all over the world). And it’s true relative to their history (they’re down 50% from the peak of 2011). 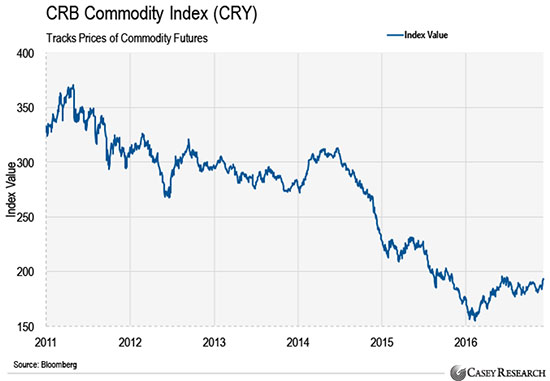 In other words, commodities are a much safer place for your capital than stocks, bonds, or real estate (excepting agricultural property) for the foreseeable future. The problem is that it’s hard to hold a carload of wheat or ten tonnes of sugar.

Remember that gold and other commodities aren’t “investments.” An investment is something that acts to create new wealth. They’re simply assets. Sometimes they can be excellent speculations. Gold, however, is money, and will remain so long after the US destroys its currency.

I recommend, therefore, that you accumulate gold and silver instead of plunging into conventional investments. Check with the dealers we list in The Gold Book to see who you prefer to work with. [Editor's Note: The Gold Book is exclusive to readers of The Casey Report, which you can sign up for at the end of today's essay.] But if you don’t have a significant position in the metals already, please get going.

A final thought. It’s usually a mistake to count on any head of state to make things in a country better. It can certainly happen—as with Erhard in Germany after WW2, Pinochet in Chile, Thatcher in Britain, or even Reagan in the US. Maybe it will be true of Trump. He’s got a much stronger personality than Reagan, for openers. But the bigger and older a State gets, the harder it is to change. It’s comparable to trying to stop a fully loaded supertanker.

Editor’s Note: If you haven't seen it yet, Doug Casey has just released his latest and most controversial prediction yet. It involves a shocking currency ban (not gold) that may soon take effect under the Trump presidency. Already, Fed members have met in private to discuss this matter. And the savings of millions could be devalued if this goes into effect. To watch the video and discover the 4 steps Doug is taking to prepare, click here.