Readers of this publication will know that we recommend the internationalisation of the reader's assets, income, residence, banking, and other interests. As such, as much as is possible, we encourage any internationalisation effort that would make the reader less dependent upon any one country, particularly his “home” country.

As we are now thoroughly in the Internet age, many people are seeing the opportunity to internationalise themselves by either starting an Internet-based business or restructuring an existing business to be operable over the Internet, as that would allow them to physically base themselves in another jurisdiction and potentially avoid many of the regulations of the home country.

The good news is that this is a very real possibility for many. An Internet-based business does offer the potential to create an income that is either equal or similar to that which one would enjoy “at home,” whilst still living in another country. In addition, in many cases, this is possible without having to change clientele or learn a new language. Therefore, the Internet-based business tends to minimise the level of change that one would need to go through in an effort to internationalise.

Best of all, the Internet is not regulated by any country at present, which allows for tremendous freedom. But, here is where the bad news comes in. There can be no doubt that, at present, Internet-based business is a tremendous boon to those who are hoping to escape the clutches of their home countries. But those words, “at present,” are a reminder that many desperate governments are hot on the tail of Internet-based businesses, to make sure that they get their unearned piece of the pie. 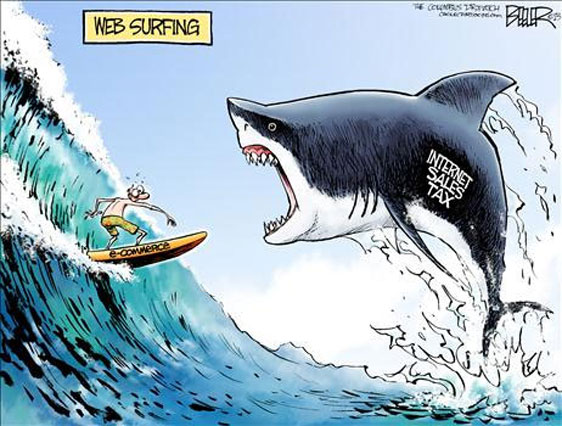 As the Great Unravelling plays itself out, those countries that have been the major players until now are finding more and more of their productive members of society abandoning ship. Each wave of desertion is being met with increasing legislation and regulation. The leaders of this trend are the US and the EU, but there are others. We can therefore be assured that, the greater the trend toward internationalisation through Internet-based incomes, the greater the push will become to regulate Internet-based incomes.

Not surprisingly, the US has already begun this effort. The Marketplace Fairness Act has passed the Senate and is on its way to the House of Representatives. (Any legislation that contains the word “fairness” seems to be virtually guaranteed to be anything but fair, a truism that was anticipated by Ayn Rand as early as 1957.)

The purpose of the Marketplace Fairness Act is to apply sales tax to any online transactions. Should this Act be passed (as it is likely to, either in this go-round or in a future form), there would be three principle negative effects that an Internet-based business would experience.

For those of us who are not US citizens, the law would not affect us, even if some of our clientele were American citizens, as, technically, the business would not be transacted in the US and would therefore not be subject to US law. (This may change, however, if existing international treaties were to be extended or new ones created. The US has been very busy in this area in recent years.) However, for those Internet-based business owners who are US citizens, the law would apply in full. Possibly, even sales to non-Americans would be taxable.

The possible exception would be if the business were registered in a country that does not comply with US law, but, again, if the owner of the business is a US citizen, he would need to consider whether he personally would be legally exempt.

When considering the start-up of such a business, the owner may wish to review the following:

A final concern: If your planned Internet-based business cannot cope with either the taxation requirements or the reporting requirements that are likely to come your way, you would be well-advised to consider an alternative.

Having said all of the above, Internet-based companies represent the future for literally millions of people, and such a business may well be one means by which you may internationalise yourself. Even with the burden of any future Internet regulation and possible tax requirements, such a move might well be a real opportunity to the reader.

Prior to setting up such a company, determine the ideal jurisdiction in which to be registered, and consider all of the likely pitfalls prior to committing to the business.

In order to learn about the best jurisdictions for setting up an offshore company or an offshore LLC, you will need accurate information from a trusted source to get started and navigate the minefield that is out there. The comprehensive Going Global report from Casey Research will show you how to do just that and much more.