Have you ever played slot machines in a casino? Or video poker on a cruise ship?

They design these games so that you win frequently. And you can get addicted to them… because at every opportunity, you have a good chance to win. (Of course, you lose all your money eventually because these games are rigged against you.)

This way of “winning,” where you have more wins more frequently, is more compelling to the way our minds work. It holds our attention… which is exactly why the casinos use the strategy in the first place.

But if you really want to get rich, you have to do the opposite. And that’s what we call making an asymmetric bet.

Asymmetric betting is when you win infrequently. Most of the time, you lose a little bit of money… or nothing happens at all. It’s very boring, predictable, and dull.

And then occasionally, you score a massive outsized gain.

This gain changes everything.

All your losses are erased 100 times over.

Many of the ideas I put my own money into operate this way. I expect to lose a little bit of money here and there… and I do. But occasionally, I’ll make an enormous winner.

One example is an investment I made in early 2012 in bitcoin. It’s the now-famous digital “cryptocurrency” released in 2009.

At the time, no one in my network knew about this oddball investment. But I told a few of my colleagues about it…

The truth is I could have never recommended bitcoin to Palm Beach Letter readers in 2012. It was far too obscure at the time… and far too small and speculative for a conservative investment newsletter.

But this was a true asymmetric trade.

It took me an entire weekend fiddling around with computer equipment and software, and trading bitcoins around to friends, before I made that bet.

And if I still held them today, my bitcoins would be worth over $2.5 million. 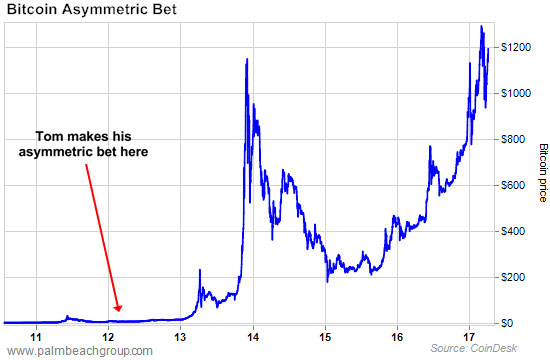 So there you have an example of what can happen when you score an asymmetric gain. Any losses I had incurred paled in comparison with the win.

How to Structure Your Asymmetric Bets

The way to do this in practice is to set up 10 trades altogether… realizing that nine of them are probably going to lose money.

So you see, placing smart, asymmetric bets over the long run can boost your average win rate.

It’s certainly not as comforting as “winning” at slots with every other press of the button. But it will make you a lot more money in the end.

Doug Casey: At a recent investor’s conference in Miami, I [Doug Casey] heard a presentation about this little-known market from a former hedge fund manager named Teeka Tiwari.

Teeka is extremely well-connected in this market, traveling all over the world meeting with experts.

This got my attention.

I know a bull market when I see one… It seems to me that a marvelous bubble is building up in this area. And it’s one that I would like to take advantage of.

Editor’s Note: Teeka has put together the ultimate asymmetric trade bundle of cryptocurrencies. The basket has six cryptocurrencies Teeka and his team have hand-selected from hundreds of man-hours of research.

One is up 286.4% and another 140.4% in less than six months. Five of the six already have positive gains. To learn more about Teeka’s crypto bundle, click here…