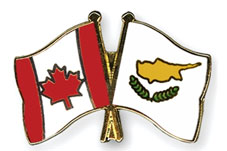 The somewhat lengthy title offers all the information necessary, but for those who, quite understandably, may not be able to accept that they have just watched Canada tumble down the Cyprian rabbit hole, here is a bit more detail from the approved budget itself:

Customer deposits could certainly fall under the label of “certain bank liabilities,” and converting them into “regulatory capital” without permission is just a gentle way of describing confiscation. Though Canadian officials have denied that the term “certain bank liabilities” includes customer deposits, we must note that the government in Cyprus also promised that customer deposits would not be touched, only to renege on that promise at the onset of the crisis. Remember lesson #1 of the Cyprus debacle, “Do Not Trust Politicians.”

As the recent events in Cyprus have been unfolding, each iteration has seemed to me to be not only logical, but almost predictable. As Jim Sinclair has recently been stating frequently, the EU have run out of options… The next step is confiscation.

There will, of course, be endless rhetoric and debate, followed by minor adjustments in method and percentage taken, but, ultimately, the powers-that-be have reached the confiscation stage. That is now carved in stone.

But, at this point, if we are watching the horizon, we will spend less of our time mourning the fall of Cyprus and more of it anticipating which countries will be next in line.

Here, I confess, I have been surprised. There were quite a few countries that, logically speaking, might have been next. Canada was not even on my personal radar. This is not to say that they would not also be in the queue, only that I would have predicted their position in the queue to be quite a bit further back.

Those observing recent developments may have understandably been saying to themselves, “I realise that we live in difficult times and that, if I am to look after my family's future, I need to face up to the fact that we may be seeing dramatic change. But there are some things I can't accept, and one of those is the possibility that my savings could be confiscated by my bank. My government would never allow it!”

For those who very understandably may find this latest realisation to simply be beyond the pale, it would be well to take a moment out to rise above the clouds for a bit of an overview at this juncture.

In most countries of what we grew up calling the “Free World,” there has been a steady deterioration, particularly with regard to corporatism (the merger of state and corporate powers). One facet of that deterioration has been increasing legislation that allowed financial institutions to create Ponzi schemes with regard to lending, in which the bank goes broke in the end but the cost for the failure is passed to the taxpayer in the form of a bailout.

Put more simply, this means that, after the fox has raided the henhouse, the government advises the public that the only way to save the situation is for the government to confiscate more hens from the farmers and give them to the foxes.

The public, desperate to return to “normal”, will accept whatever the government says at this point, in the hope that it will all somehow turn out all right. Only a tiny percentage will be prepared to say, “We've been systematically raped and robbed by both our government and our banks, in full complicity with each other. It's high time I put what I have left in a sack and find a way to protect it on my own.”

Those few who do so, will turn to safe havens for wealth (however much or little that wealth may be). They may invest in overseas properties that cannot be confiscated by their own governments, buy precious metals and store them privately, and so on.

The objective will be simply to make it as difficult as possible for their governments to confiscate their wealth.

Whilst there may be no guarantee that they will succeed, they would know that, at the very least, they will not be the low-hanging fruit when their government enters the orchard to begin the picking.

However, as history shows, the great majority of the people of all countries will fail to act. They will watch in confusion as events unfold, as the banks continue to come up with schemes to further bilk the public of their wealth, whilst the governments assure the public that, “It's an emergency situation. We have to be willing to sacrifice a bit more to save the system, or we'll really be sorry.” In the end, the majority of people will comply.

Cyprus is a bellwether of what is next for the world in general. A term has even already been coined for what is coming – a “bail-in.” An event in which the public must accept that, in order to save the banks from collapse (which they have been told since 2008 is the absolute worst possible outcome), they must accept that they must make their “contribution” – confiscation of their deposits by the banks. First, it will be, say, 5%, then it will be announced that 5% didn't solve the problem and another transfusion will be needed. Then another.

Some people will figure out along the way that they are being robbed by both their government and the banks, working in concert, but most will regard that reality as impossible, as it has never happened before and surely can't happen now.

If Cyprus is the bellwether, then Canada is the red flag, showing that Cyprus is not an isolated situation. The damage wreaked by monumental debt is systemic, and it has taken place throughout the First World and beyond.

This latter statement will very likely be the most difficult to accept as reality. If so, here is something to consider: Canada has approved its bail-in, on a national level, just one week after a final decision was made in Cyprus. As we all know, the wheels of governments, worldwide, move slowly. The reader might ask himself whether he believes that the Canadian government has, in short-order, approved its own bail-in, in reaction to the events in Cyprus. If this possibility is simply too far-fetched, he must accept that the plan for Cyprus has been known to the Canadian government for some time and that a similar bail-in for Canada has been in the works for a while. It was simply agreed that Cyprus would go first – to act as the litmus test.

If the reader finds himself agreeing that it is likely that the Canadian government had foreknowledge of the events in Cyprus, his next logical conclusion would be that other nations had the same foreknowledge and have very likely been getting their own ducks in a row.

Most countries in the First World have gone down the same road of monumental debt and have found that that road has led to a precipice. At this point, they have no other option left in their bag of tricks. They are all in the same boat and will play their last option – confiscation of wealth.