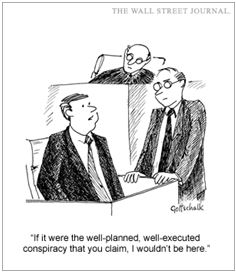 “Is the gold market manipulated?” This is one of those extremely dodgy questions that has left both investors and economists very divided.

Doug Casey has offered an answer to the question, by saying,

“Many gold bugs (but not all, because I too am a gold bug) seem to think that a coterie of malefactors of great wealth sit around a huge boardroom table, perhaps chaired by Dr. Evil cradling his white cat, and send forth their minions, ‘Da Boyz,’ to ‘smack down’ the depressed and struggling gold and silver markets. A large number of gold bugs are also conspiracy bugs.”

I heartily agree with Doug in the way that he presents his point of view. Many gold bugs do imagine that a formal conspiracy exists to control the price of gold. Here is a conversation I had with an American associate not long ago, regarding this belief:

JT: How do you see the manipulation of gold?  What do you think is happening?

KR: It’s pretty obvious to me that you couldn’t have such wild downward fluctuations if the market weren’t manipulated. No one seller has the power to make such fluctuations. Collusion has to exist.

JT: Who do you see as being the culprits?

KR: The banks… and the government.

JT: Do you mean the banks as a whole? All the banks?

JT: So, the central bank—the Federal Reserve? And would you include the bullion banks? J. P. Morgan and so on?

JT: And you mention “government” singular. Is it just the US government?

KR: Well, no, obviously the EU, the IMF, and the big banks of Europe.

JT: How do you see them all getting together to arrange these fluctuations? Do they meet on a regular basis? It would seem that there would be quite a lot of people to get together.

KR: Oh, no. I don’t see them having conferences or whatever, but they obviously work together in some way, or none of this could happen.

The view expressed above is fairly typical. It reflects several points that are common assumptions by many investors.

1) Major fluctuations could not take place without some form of collusion, involving both banks and governments.

2) The collusion is not limited to any one country but seems to exist primarily within the US and the EU.

3) There is no “board of directors” who meet regularly to decide the fate of gold, but there is some form of informal communication between interested parties.

So, who is correct—my associate above, or Doug Casey? Is there manipulation or isn’t there? This is the question that we hear repeated time and again in recent times. Yet, is it the right question?

In actual fact, it is safe to assume that, wherever parties have the opportunity to mutually benefit each other, it is not unlikely that they will do just that. This is true in any field of endeavour. A football team will agree on tactics before going out on the soccer pitch to play. Two or more oil companies will agree to raise their prices on the same day to assure that one will not be singled out for blame for the price rise. Two or more bankers will agree to work in concert on a given plan, in order that the benefit to each is more assured.

In each case, each player is interested in his own success, but recognises that, by agreeing on tactics with one or more others (even if they are his competitors), his chance of success is increased through collusion.

So, is it likely that any banker, any government, or even any investor, would resort to manipulation, if the result were likely to benefit him? Of course. And, in fact, Doug Casey has this to say about that:

“About conspiracies with gold or anything else, people constantly conspire… Whenever a couple of people of the same trade get together, they always try to conspire for their interests and against the interests of the public.”

Given the above information, it would seem logical that, rather than argue over whether there is manipulation of the gold market, perhaps our questions should be:

1) To what degree is gold manipulation attempted by those with a vested interest?

2) To what degree are they likely to be able to be effective in their efforts?

In considering these two questions, it might be a good idea to consider the cartoon above (taken from the Wall Street Journal). As investors, we tend to focus on the desire by others to conspire. But, at the other end of this reasoning is the ability to conspire.

In looking at the cartoon, we are reminded that, no matter how evil we think a given government may be, no matter how greedy we think a given banker may be, both the world’s governments and the worlds banks have proven time and time again to be guilty of overreach; that is, they assume that their position of power will assure that, if they attempt to control a market, they will succeed.

However, history shows that both governments and banks have a patchwork quilt as a record for effectiveness in this regard. Both exhibit a history of misinterpretation of market drivers, inadequate planning and inadequate execution, to say nothing of a penchant for betraying one another. (The admission by Barclays Bank that they manipulated LIBOR is a good example.)

As such, the concept of a finely-tuned conspiracy of bankers and governments in which all the players (including the egotistical heads of countries) all agree on every facet of a “Grand Plan” is unlikely in the extreme. On the other hand, it is highly likely that an endless series of deals between any two or more parties will crop up along the way. They will succeed or fail to varying degrees. (And we should not overlook the likelihood that, whatever one group should attempt, another group may, inadvertently or not, spoil that attempt through their own plan, which may well be a different one.)

By arguing whether or not gold manipulation exists, we may find that we are wasting our brain cells on the question. A better question, and one that we might choose to monitor on a regular basis, might be, “To what degree is successful manipulation taking place?” We might then use the on-going answer as a guide, to inform our reasoning going forward, as to what impact any perceived manipulation is likely to have with regard to our precious metals investment.