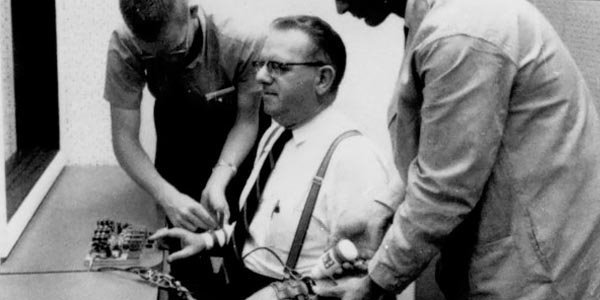 In 1961, Nazi executioner Adolf Eichmann was brought to trial for war crimes in Israel. At that time, there was worldwide discussion as to whether such a man could possibly be found not guilty, under the claim that he was “just following orders.”

Was it possible that mankind, generally, is so devoid of conscience that people in positions of control would simply follow orders, if someone in greater authority “took responsibility” for the outcome of the instruction?

This question led Yale Psychologist Stanley Milgram to create a number of psychological experiments on people’s willingness to follow the instruction of authority figures that conflicted with their own conscience.

The experiments were simple. Average people, from a variety of walks in life, were asked to participate. The participant – the “teacher” - was requested to ask multiple choice questions of a “learner”, who had ostensibly been hooked up to an electric generator. If the learner provided the wrong answer, the teacher was to press a button, giving the learner an electric shock. (Although the learner was actually an actor and, in fact, received no shock, the teacher didn’t know that.) With each additional wrong answer, the “shock level” was increased until a “fatal” shock was induced by the teacher.

The majority of people that participated as teachers followed the instructions. If they became reluctant, the authority figure would assure them that he himself took full responsibility for the outcome. The teachers invariably acquiesced.

All of the participants were willing to administer shocks, but an alarming 65% were prepared to administer a potentially fatal electric shock when encouraged to do so by an authority figure – represented by a man in a white lab coat. This they did, even if the learner appeared to be in agony and was begging for the teacher to stop.

Mr. Milgram was surprised that such a high percentage of people were so willing to cause pain or even death, if they felt that they were following orders and that a person in authority said it was alright.

So, what can we conclude from this? Well, first, this experiment was conducted in the 1960’s, long before political correctness began to erase moral judgement in favour of mindless conformity. That suggests that, if the experiment were conducted today, the odds of people conforming would be even greater.

Second, even though we presently live in less than ideal times, these are the good old days. The era that we’re about to herald in will be far more challenging that the present one.

To wit: Markets are presently in their biggest bubble in history. We’re also in the longest bull market in history. This bubble is therefore overdue to pop. In the aftermath, we can expect to see treasuries dumped back into the US market. The US dollar will end as the petrodollar and the world’s reserve currency. The overblown real estate market will collapse. Debt default (consumer, bank and national debt) will be defaulted upon. Commodity prices will rise dramatically, whilst asset prices will fall. A currency collapse will occur.

Unfortunately, as scary as all that may seem, it’s a mere thumbnail sketch of events. The reality will be far more complex.

We can expect that, along with these events, will come dramatically increased unrest and civil disobedience, countered by an equal level of retaliation by authorities. Those who now complain about the existing police state can expect a dramatic increase in controlling behaviour from all of the many authorities – DHS, TSA, CIA, FBI, USMS, DEA, ATF, BOP, DOJ, the military, local and state police and a host of other authorities.

The Nazis, by comparison, had a far less extensive web of authorities through which to dominate the German people.

In 1945, the Allied powers looked back on the Nazis’ SA, SS and gestapo and were horrified at the lengths they had gone to, in exercising control.

Retribution was sought. In the Nuremburg trials, twenty one men were charged with crimes against humanity. The defendants all proclaimed their innocence, many declaring that they were “just following orders.”

Eighteen were found guilty and eleven were sentenced to death.

At that time, many westerners felt that the trials had brought an end to an era of appalling crimes by the Nazis that would never be repeated again.

However, the authoritative agencies that now exist far eclipse those of Nazi Germany, both in number and extent of power. All that’s needed is a crisis to provide them with their marching orders.

So, what’s likely to happen, then? Will those with a badge be more compassionate than the Nazis? Will they refuse orders if they’re told to perform acts that they, normally, would consider inhumane?

Well, unfortunately, Mr. Milgram may have provided us with the answer to that question.

Whether we like to accept it or not, the average person is not really a terribly independent thinker. He will do as he’s instructed to do. His nature is simply to follow orders.

Today, all US military recruits are required to take the Armed Services Vocational Aptitude Battery – essentially an IQ test. The lowest acceptable percentile score to join is 36 for the Air Force, 35 for the Navy, 32 for the Marine Corps, and 31 for the Army (roughly half of what you were required to achieve in order to graduate in school).

The service dictates a preference for IQ’s above 93 for military recruitment, but an acceptance level is a mere 81. (The Levine and Marks IQ classification describes this level as “borderline” impaired.

So, does this mean that, in a crisis, your neighbourhood is destined to be populated by people in authority who walk on their knuckles?

Not entirely. Although this is quite a low level for acceptance, it should be borne in mind that, in the Milgram experiment, those who were chosen for participation were average – well above the base level acceptable for military service.

And what that means is that, in a crisis, average, everyday people who wear a badge can be expected to follow orders, regardless of whether those orders might fall under the heading of “inhumane.”

Whilst the coming crisis promises to be very challenging economically, it promises to be even more worrisome in terms of what the police state will look like.

One day, when the crisis has ended and order is restored, it wouldn’t be surprising if the new regime were to hold trials for those responsible for atrocities committed.

At that time, we could reasonably expect that, at their trials, they would say, with all sincerity, that they were “just following orders.”