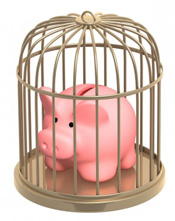 Capital controls are a favorite tool in a bankrupt or domineering government’s toolbox. You should be familiar with them and how to preempt them.

There are numerous countries that currently have capital controls in one form or another—China, Colombia, Iceland, Cyprus, India, Argentina, Venezuela, Ukraine, and Cuba, to name a few.

It’s not exactly a secret that the West generally and the US in particular are moving deeper into bankruptcy and are seeking more and more control over all facets of their citizens’ lives. These trends will sooner or later lead to an overt attempt to control the flow of money in some way—just as they have in other countries throughout history that have headed down similar paths.

It’s crucially important to your financial future that you understand what capital controls are, how and why they are implemented, the harm they can cause, and what you can do to protect yourself.

This is because I believe it is a near certainty that the US dollar will lose its role as the world’s premier reserve currency. And when that happens, capital controls are sure to follow.

The purpose of capital controls is straightforward: to restrict and control the free flow of money into and out of a country. Capital controls come in all sorts of shapes, sizes, and labels. But no matter what they’re labeled or how they’re implemented, the end result is always the same—restricting, controlling, and taxing the flow of money.

The effects are always harmful. Strategies on how you can protect yourself are frequently discussed on the International Man site.

It’s simple: imposing capital controls is similar to penning sheep that are about to be sheared so that they cannot escape.

Capital controls are not usually used unless a government has run out of ways to otherwise steal money from its people, such as when it can no longer borrow, inflate the currency, or tax like it used to.

In most cases, capital controls are used during acute crises, like financial and banking collapses, wars, or in countries with chronic economic problems. In other cases, it’s just the dominating nature of the particular government to control its citizens by denying them the means of taking their wealth abroad.

No matter the immediate reason, an always attractive effect of capital controls for governments is that they trap as much money within their borders and their reach as possible. They of course do this to optimize the amount of money that’s available for them to tax or otherwise confiscate.

Capital controls are also used because they can be politically popular. The government will try to get the average person to incorrectly believe that moving your money offshore or investing in foreign assets is something that is only for the rich or is otherwise unpatriotic (both are obviously false). It’s also a way for the government to show that it is “doing something” during a crisis.

In order to be effective, capital controls naturally have to come as a surprise… well, to the average person at least. The political and economic elite are usually tipped off well in advance and take action accordingly.

Announcing them to the public beforehand would cause people to get their money out before the controls are put in place, which would defeat the purpose of implementing them in the first place.

In Cyprus they came in a flash, on a seemingly ordinary Saturday morning when people would least suspect it. From the perspective of the government, weekends and holidays are ideal times to implement capital controls.

Here are the four most common ways they’re imposed:

The first way capital controls are imposed is when a government sets an “official” currency exchange rate. Since gold’s value is universally recognized across the globe and is the international money par excellence, “official” prices for gold also fall under this category.

The “official” rate is always unfavorable compared to the black market rate (i.e., the free market rate) when you are converting hard currency to local currency. This is exactly what’s happening in Argentina and Venezuela. Unless you go through some convoluted process, whenever you wire or otherwise bring large amounts of money into and out of the country, you’ll likely get stuck with the unfavorable “official” exchange rate set by the government. Getting the more-favorable black market rate usually involves informal transactions on the street, which is of course technically illegal since you’re supposed to use the government-approved “official” rate. The penalties and enforcement of this vary widely among countries with this type of capital control.

In reality, the difference between the market rate and the “official” rate amounts to a wealth transfer from you to the government. It’s a form of implicit taxation.

Another form of capital controls is when a government imposes explicit taxes that specifically target foreign investments, foreign currencies, or gold in order to discourage you from buying them. An example of this is India, which imposed a 10% tax on gold imports in 2012.

Governments prefer you stored your wealth in the local currency, where it’s easier for them to tax, outright confiscate, or siphon via inflation.

Taxation on inbound/outbound money transfers is also another tactic. While you would still be able to send money abroad to an offshore bank (or receive it from abroad), there would be a tax, of say 20%—or whatever the government wants.

No matter the type of taxation-based capital control, you will still able to move your capital… though it will likely be very costly to do so.

Capital controls can also come in the form of restrictions on the amount of foreign currency or gold that can imported, exported, or otherwise possessed. This may come in the form of a regulation that prohibits you from taking a certain amount of money out of the country (usually only a couple thousand dollars) without special permission from the government.

This is the most severe form of the capital controls. This is where a government outright prohibits the ownership of foreign currencies, offshore bank accounts, foreign assets, gold, or moving any form of wealth abroad.

Stay tuned for part 2 of this article. I’ll discuss the high potential for capital controls in the US, what could trigger them, and proven strategies to protect yourself.

If you’re not already a member of Doug Casey’s International Man, you can sign up for free here. You’ll get part 2 as soon as it’s released, as well as all the latest news and information about internationalization, and access to a bunch of other great stuff, like our very popular free special reports.