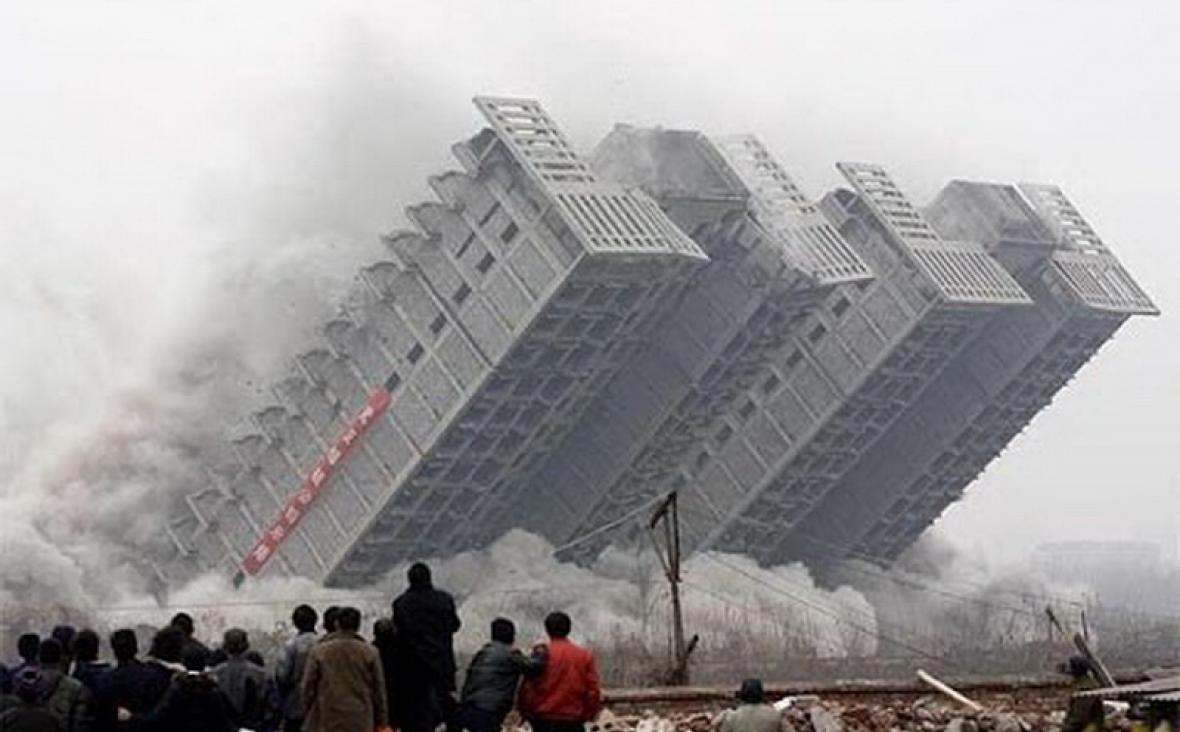 Let’s say that you and several other shareholders owned a large building and you had reason to believe that its structure were faulty. Possibly you’d not maintained the building properly and you now realized that, if it were to fall down, you’d be liable for any damage caused.

If that were the case, once you’d decided that collapse was a near-certainty, your greatest concern, would be that it collapse in such a way that would minimize the economic damage to you and your fellow owners.

This reasoning is the basis for “planned demolition.”

No owner wants to lose his asset, but once collapse is certain to occur, it’s best to call in the engineers and have them dynamite the building. This assures three things:

So, what, then, might we expect if a given economy had outlived its usefulness? What if its “owners” – the government and large corporations who actually control the economy – had milked the economy to such a degree that it had passed the tipping point of repair and it was now more cost-effective to do away with it?

Well, the same three considerations would apply, wouldn’t they? First, it would be counter-productive (from their point of view) to have it collapse piecemeal. It would be better to engineer a crash and get it over with, then move on.

Second, it would also be important to control the manner of collapse. An uncontrolled collapse might be costly to the owners. Consequently, the major banks and large corporations would arrange for the government to provide them with bail-outs, bail-ins and other gifts that, instead of them losing money from the crash, they’d actually profit from it. Likewise, those key people in the government that would continue to be needed after the crash could count on the major banks and corporations to kick back a share of the money so that they, too, benefitted more from the crash than from the paltry six-figure salaries that their official jobs provide.

And, finally, if a date for the collapse could be planned in advance, the owners would have the opportunity to sell off those assets that would be casualties in an economic crash.

We can’t be certain that, this time around, the Fed will do exactly what it did in 1929, but it worked like a charm back then and no one in the present day is old enough to remember what happened in 1929.

For example, the owners could encourage the public to invest primarily in stocks, bonds and other investments that they know would not survive a crash. If they did a good job of convincing the public, they might even create a bull market – a feeding frenzy in which investors paid far beyond the worth of these investments, having been made to believe that such investments were “going to the moon.”

Of course, there would be those investors who would choose to put money in traditional forms of wealth storage, such as precious metals. The owners would see this trend as a threat and would need to go out of their way to convince investors that precious metals were a “barbarous relic” of another age and only a fool would put his money in them.

But, of course, the owners would know that, in order to minimize their own losses in a crash, they’d want to dump the very investments that they’d touted so fervently and move their money into the safer investments such as precious metals.

And they’d want to do this just before the collapse, so that other investors didn’t twig onto the fact that the owners had abandoned the very forms of investment that they’d been promoting for years, and switched their money to the investments that they’d derided in the previous years.

In order for all the owners to accomplish this, they’d have to agree on a collapse date, then make the switch in a relatively short period of time. Otherwise, the average investor might figure out that he’d been hoodwinked.

Today, all three of the above considerations have been playing out, in order, and we’re now ready for the main event – the collapse.

What will this look like? How is a “planned demolition” carried out, when the edifice in question is not a mere building, but an entire economy?

Well, we might want to examine historical economic collapses and see what happened back then, and the most obvious choice would be the Crash of 1929.

On 29th October of that year, the stock market crashed and went into freefall, dropping 12% on its first day.

This was a planned demolition. The “owners” had pulled out in the months prior to the crash.

And the detonator that triggered the crash? Well, actually, that was quite simple.

And banks did their part, by loaning money to investors to buy on margin. As a result, a boom of historic proportions was created.

But since it was all based on money that didn’t actually exist, all that was necessary was for the Fed to raise interest rates and the ability of the investor to meet his payments was exceeded. He was already up to his teeth in debt and only a small rise was necessary to put his nose under water. He would now drown if he didn’t sell – and sell quickly.

Of course, his fellow investors did the same and the crash was understandably dramatic.

So… today, we’ve already seen the three considerations above come in to play. We can’t be certain that, this time around, the Fed will do exactly what it did in 1929, but it worked like a charm back then and no one in the present day is old enough to remember what happened in 1929, so it would certainly be a proven method and might well serve as the detonator this time around.

At this point in the narrative, the reader may well be saying to himself, “The Fed has already raised the interest rate several times in the last year and has announced that they intend to do so again, probably every quarter… Uh-oh.”

But, if we were on the verge of a crash, wouldn’t our leaders say something? Well, if history repeats, this time out, no. In late 1929, some economists were warning that a crisis was imminent, but the “owners” stated that this was a ridiculous false claim. The world’s most respected financier, Bernard Baruch, famously cabled Winston Churchill, saying, “There may be a recession in stock prices, but not anything in the nature of a crash.” Even President Herbert Hoover assured Americans that the market was sound.

So, not surprisingly, the average investor remained in the doomed building in 1929, and did so with confidence.

The question only remains as to how many of today’s investors will figure out that the hand is on the detonator and it’s time to exit the system.