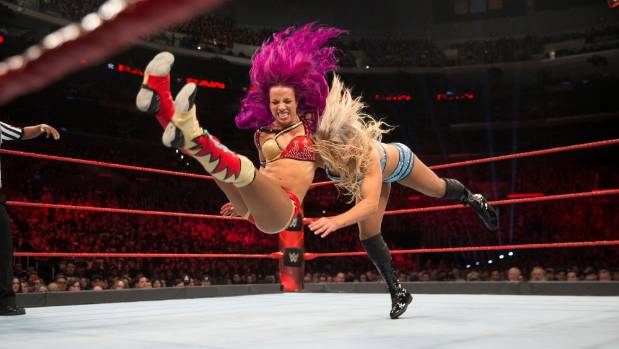 Of course, even as a boy, it was evident that it was a sham. Some wrestlers played the role of angry bullies; others were practically cartoon characters. The threats each made to the other before the match, the silly outfits, the absurd holds and body slams – it was clearly phony.

And yet, each Saturday, my friends would say, “Okay, maybe some of it’s phony, but did you see that guy bleedin’? That was real!”

Were my friends as gullible as that? Well not by nature, possibly, but, if they’d accepted that televised wrestling were totally phony, it would have lost all its excitement. Viewers would grow bored with it and cease to watch it. And, of course, it was so compelling – seeing two tough guys dramatically fighting it out in the ring.

And, of course, there was the tension created, since the protagonists always seemed to have been fairly evenly matched. Some viewers rooted for one wrestler, some rooted for the other. Right until the end of the match, it remained uncertain which would win. Tension was maximized.

But, today, wrestling has been taken to another level. The outfits are more theatrical, the drama is greater and, best of all, pretty women have been introduced. In fact, some had previously been beauty pageant contestants. Somehow it seems that the prettier they are, the more likely they’ll be capable wrestlers.

But, as adults, we’ve matured and are no longer so easily taken in.

Today, as responsible adults, we turn off wrestling and watch network news.

When I was a boy, it was impossible to tell whether the reporter was a liberal or a conservative. They reported the news dryly and allowed the viewers to make up their own minds. But, sometime in the 80’s, this began to change. It became apparent that there were liberally-leaning networks and conservatively-leaning networks.

The news studios were more expansive and more expensive, with lots of coloured lights.

And, remember, at one time, all news reporters were experienced former field correspondents who were now middle-aged – dull, possibly, but very capable.

Today, there’s a mix of younger-to middle-aged men, but, increasingly, the emphasis is on female reporters. And they all seem to be very attractive indeed, with a preponderance for long blonde hair. In fact, some of them were (literally) previously beauty pageant contestants. Somehow it seems that the prettier they are, the more likely they’ll be capable reporters.

Some reporters play the role of angry bullies (Bill O’Reilly, Sean Hannity, etc.); others are practically cartoon characters (Greg Gutfeld, Rachel Maddow, etc.). And, like wrestling, it’s so compelling - watching liberals and conservatives trying to out-shout each other on the stage. Clearly, this is not objective, sober news-reporting, but it’s most certainly producing the desired effect – to get those who are gullible enough to tune in every night to receive the latest updates on a ceaseless rehash of recent events.

In recent years, the average viewer has begun to admit that this is largely a stage show; that conservative networks present a dramatically-skewed conservative slant, whilst liberal networks present a dramatically-skewed liberal slant. This practice has become so extreme that, if the viewer can force himself to flip back and forth from one station to the other, the same news event actually appears to be two different occurrences, the reporting is so divergent.

Interestingly, though, liberals are only too happy to swallow their chosen network’s presentation of the behavior of conservatives, whilst stating that the news on the conservative networks are unquestionably lies.

And the reverse is true for conservatives. They accept their own network’s presentation without question, whilst vilifying the presentation by the liberal network.

Each concedes that his own network fibs a bit, yet maintains a hatred of the opposing network, to the point that he can’t stand to watch it, even for five minutes.

The net result is that, with each passing day, the media increase the polarization between the two primary political factions. Conservatives blindly hate liberals; liberals blindly hate conservatives.

And, of course, this is the whole point. Just like televised wrestling, the idea is to increase the drama as much as possible, in order to keep viewers tuning in each night. As Hitler said, “Make the lie big, keep it simple, keep saying it and eventually they will believe it.”

But, surely, this reference to Hitler is an exaggeration as regards the news media?

No, I’m afraid not. The lie in question is, “If the opposing party is elected, the country is in imminent danger of being destroyed.”

In each presidential election, the electorate exhibit greater anxiety than in the last. They bite their nails throughout the process, as though their very survival depends upon the outcome. After the election they either swoon with relief or plunge into despair, stating that they may have to leave the country.

And, yet, just as in televised wrestling, the protagonists are secondary. The show’s promoters – the Deep State – are unelected and retain power forever. The protagonists are mere bit players. Each puts his own twist on the show, but the overall direction of the country is maintained, regardless of which actor wins the match.

Televised wrestling is harmless entertainment for kids and also for those adults who would prefer to have their entertainment be at a low intellectual level. Hopefully, however, for those of us who recognize the need to see past the masquerade if we’re to make intelligent decisions, we either turn off the television, or, at the very least, stand way back mentally when we’re viewing and recognize that what we’re seeing is not just a slight difference of interpretation of people and events, it’s choreographed propaganda.

The viewer, if he cannot maintain total objectivity, watches at his own peril.