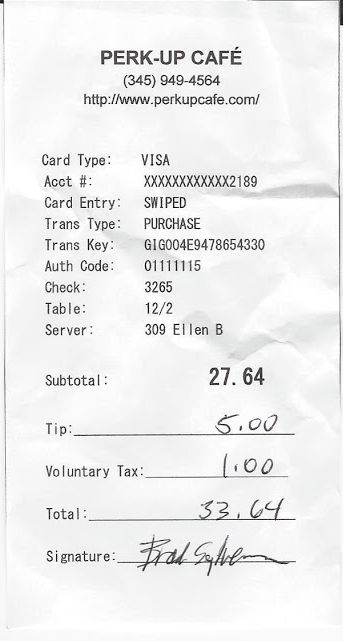 Here we have a standard credit card receipt from a coffee shop.

The diner understands that he’s not obligated to order anything that he doesn’t want to receive, but that, for whatever he does order, he must pay the price on the menu.

The subtotal is printed in large type on the charge slip. He may then decide whether or not the service he received was of particular value to him. Diners typically choose to pay somewhere between 10% and 20%, depending on the value they feel they’ve received.

But the receipt above differs from the norm. After the “Tip” line, another line exists for “Voluntary Tax.”

This is a very special coffee shop. In this shop, the owners and servers pay no involuntary tax and therefore, no tax is passed on to the diner. In this coffee shop, the diner decides what level of tax he feels he should pay his government, in accordance with what he feels his government’s contribution has been to his meal.

This particular diner has decided that his government deserves something, but not as much as either the coffee shop’s owners or the servers. He has generously allowed a $1.00 tip as his “voluntary tax.”

Of course, as the reader already understands, this is a hypothetical coffee shop. Were its owners to operate in this fashion with regard to the payment of taxes, they’d find themselves in prison for a lot longer than, say, an illegal immigrant who’d murdered someone.

But, what if this was the system that we operated in? What if the people of a country had the freedom to decide every day how they felt about their government’s performance and could reward them through voluntary taxation?

Well, the first reaction might be to write a zero on the line provided. But, at some point, most people would say to themselves, “Come on, now, it’s not as though they do nothing for us. Let’s see… they do a very good job building roads and maintaining them. Maybe 5% for that? How about the Fire Department? Pretty good – let’s say 4%. The schools? Bad and getting worse – 2%. And the Police? – they’re a travesty. I’ll give them 0% only because I can’t go any lower.”

Over time, people would learn to provide a “reasonable” tip, because, without any tip at all, Government would shut down. (And we still want those nice roads to be maintained.)

But there’s another facet to this and it’s an important one. If Government operated on the basis of voluntary taxation, as do coffee shop servers, they’d quickly learn to make sure that, on a daily basis, their most important task would be to assure that their constituents were receiving good service. They’d learn that their primary preoccupation would need to be the well-being of their constituents.

But, of course, it could be argued that those constituents who were forever asking Government for handouts would be saying, “We want more free stuff, or you’re not going to be getting any tips from me.”

But Government would quickly learn that the more “free” stuff they gave out, the smaller their own take would be. Very quickly, they’d learn to say, “Look, we need to make, at a minimum, a living wage in this government business, and if you want free stuff, the system simply isn’t going to work. Money out can’t be greater than money in.”

And so, within a very short time, governments (the very people who invented the idea of free stuff to constituents and have, for generations, insisted that it’s not a problem) would be providing constituents with a lesson in economics – one that’s entirely realistic. (Remember: before politicians introduced the idea of “entitlements”, they didn’t exist and no one expected them.)

And there’s one further benefit in a voluntary tax system. The more efficiently the government was run, the more money the constituents would retain, and have the opportunity to either spend more or invest. If this were so, they’d be more comfortable paying higher tips. (This is not conjecture. In countries that have low-tax or no-tax regimes, people tend to be generous tippers, as they tend to retain more wealth.)

The government that performed well would inherently be receiving greater revenue and therefore their own personal income could be higher, but never so high that it cut dangerously into the services that they provided.

In addition, as soon as any politician began to demonstrate conspicuous spending on himself (chauffeured limousines, unnecessary travel, income above that of the average person, and any other benefits outside the norm) he’d be likely to be voted out.

However, any politician that did an exceptional job of service to the electorate would be likely to get away with voting himself a bit extra. Just like the exceptional waiter, he’d deserve greater remuneration.

Of course, this is all wishful thinking. We fully understand that no government is ever going to institute a system in which what they take is relative to what they provide. The world of government is, for all practical purposes, highway robbery without the highway.

Political leaders in every country will do all they can to grow the government to as great a degree as is possible over a long period of time, until the country finally collapses through top-heaviness. In doing so, they maximize the share that they get to keep. They will always think in terms of what’s best for themselves in the present, rather than what’s good for the country in the long-term. This assures that all countries eventually degrade. (The trick is to seek a country that’s on the way up, not on the way down.)

No government ever truly intends to serve the public. Their task, as they see it, is to extract as much from the public as they can, and still get re-elected.

Typically, the larger the country, the more rapacious the government and the less the voices of the constituents are of consequence.

No one would ever tell his friends, “The coffee house with the worst service is the one closest to me, so that’s where I go each day.” Similarly, no one should wish to say, “The country that offers the worst value relative to the taxation level is the one where I was born, so I’ve decided it’s easier to just stay here.”

If the reader feels that this is what he may have settled for, he’d be encouraged to try another coffee shop and see if he likes the service better there.