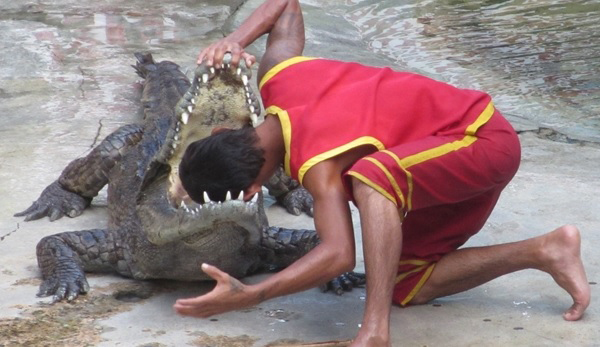 The fellow in the photo above is taking a bit of a risk. If all does not go well for him, he may become a candidate for the annual Darwin Awards – an award given to those who have inadvertently taken themselves out of the gene pool.

Of course, Darwin’s premise was that, through natural selection, those who are born weaker, deformed, or otherwise less capable of survival are less likely to live long enough to procreate, thus assuring an ever-stronger, more adaptable species.

This same premise can be applied to banks that follow unsound business practices. They’re more likely to go under as a result. This invariably causes suffering for those individuals who chose to do business with the irresponsible bank, but it can also be argued that those who believe empty promises by an irresponsible bank need to learn the lesson of economic prudence. Winnowing out those banks and their clients results in the responsible banks being stronger.

Of course, when we declare any bank to be “too big to fail,” we assure that the bank in question (and other banks) will behave irresponsibly, as they are assured that they will be bailed out by the taxpayer.

And the premise applies also to governments. Any government that behaves irresponsibly (promising entitlements to the populace, waging war and increasing the size of the government itself, without any plan as to how it will all be paid for) can be expected to exit the gene pool of nations.

The problem is that, unlike the personal Darwin Awards, in which the imbecile in question is likely to meet his end soon after his error, nations tend to suffer for an extended period from poor economic and militaristic steps taken by governments before they collapse. Worse, they take their people down with them when they go.

As an example, in the twentieth century, the UK poured money into two world wars, ultimately impoverishing the country and ending their dominance as the world’s foremost empire. The UK still limps along as a nation, but is greatly diminished from what it was in the nineteenth century.

Across the pond in the U.S., the Federal Reserve was created in 1913, in part, to rob the American people, through regular inflation over an extended period of time. It worked well. Not understanding what inflation means, the American people have lost over 97% of the value of their dollar over the last one hundred years. At around the same time, the U.S. instituted income tax. It started out small (as income taxes always do), then, like Topsy, it just grew. As a result, people who receive lower wages in a no-tax jurisdiction are likely to have a far better standard of living than those in the U.S. (and other countries that have income tax).

And that’s not to say that the UK and U.S. are unique. Quite the opposite. In fact, it’s the norm for any country’s politicians to make promises of largesse to their people just prior to an election. And with each election, the promises need to become larger, to inspire the people to vote for the promisers.

Along the way, politicians use warfare as a tool to both distract the voters from political misdeeds and to convince them to give up their rights in times of war. Today, the concept of perpetual war allows a more frequent removal of rights.

Each of the above works to the advantage of the political class (regardless of whether they claim to be Tory or Labour, Democrat or Republican.) It does however mean that, at some point, economic, social and political collapse will take place when the abnormalities become so excessive that the system can no longer bear their weight.

We’re passing through an unprecedented period in history, in which quite a few of those nations that were once the most prosperous; the most free; the most forward-thinking, are all headed downward at the same time, and for the same reasons. Hence, we shall in the near future be observing the removal from the gene pool of nations many of the most powerful (and formerly most desirable) countries.

It should be stressed that this does not necessarily mean that these countries will come to an end. Their geography will remain, but they may be crisscrossed with new boundary lines, should any of them be cut up. For others, it will mean retaining the name of the country, but they will be “under new management.”

However, existence within these geographical locations will be changed dramatically. Once a country collapses economically/socially/politically, it’s likely to take a long time to recover. That means that those who are getting by in those jurisdictions (or may even be doing well) may find their well-being curtailed – possibly dramatically.

Japan is overdue for a Darwin Award, as are the countries of the EU. They represent a buffer for countries such as the U.S. and Canada. Once the first dominoes topple, the others will soon fall.

We’re taught to believe that we’re married to the country of our birth and would be “deserters” if we were to leave. But, if our country of birth doesn’t represent how we wish to live, we’re living in the wrong neighbourhood. Most people understand that, if they don’t like their neighbourhood, they’d be stupid not to leave for a better neighbourhood. But what if that “neighbourhood” is the country of your birth? Is the concept not the same?

If someone we know foolishly tempts fate by putting his head in a crocodile’s mouth, very few of us would follow his lead. Yet, people in their millions have, throughout history, watched their countries reach the point of self-destruction and have simply gone along – accepting their fate as the failing country carries them over the cliff.

Darwin was correct. Those who represent the future of the species are those who are the strongest and choose their own survival in times of crisis.

Editor’s Note: The coming financial crisis is going to be much worse, much longer, and very different than what we saw in 2008 and 2009.

That’s exactly why New York Times best-selling author Doug Casey and his team just released an PDF guide. It reveals why a financial shock far greater than 2008 could strike America within the next seven months. Click here to download it now .