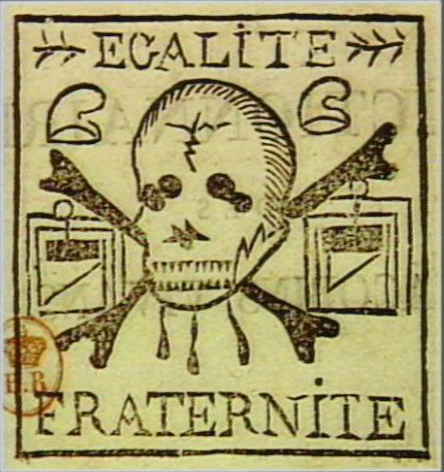 Here we have an eighteenth century depiction of two-thirds of the motto of the French Revolution – Liberté, Égalité, Fraternité, or “Liberty, Equality, Fraternity.”

It’s significant that Karl Marx was inspired by the French Revolution to form his concept of a utopian society. He envisioned a worldwide revolution in which all people everywhere would do away with the rich and everyone would then be equal. He felt that this could be achieved by peaceful means in England and America, but would require force in Germany and Russia, and a “temporary” dictatorship by the proletariat in order to create the ideal society. The utopia, he said, would from then on be self-sustaining.

As we now know, his utopia was a bit naïve, as revolutionary leaders, once exposed to the heady thrill of achieving power, are extremely reluctant to then give it up. They tend to become far more autocratic and ruthless than their predecessors and, rejecting socialist abnegation for themselves, ultimately become the next aristocracy.

It’s a pity that Mr. Marx didn’t see this coming. It was certainly evident during the French revolution, as is seen in the contemporary banner above, with its prominently featured skull and crossbones. (In case the observer didn’t get the point, the artist further accentuated his composition with the addition of two guillotines.)

Had Mr. Marx been paying attention to the actual results of the revolution, he might have noticed that the “Liberty” was never intended to be liberty for all, merely for some. (The others were meant to offer up their heads to the cause.)

And, in this, they were, of course, by no means “equal” to the proletariat who conquered them. As for fraternity, that was most certainly achieved in the form of mob violence, but it didn’t take long for the fraternity to break down, as the proletariat fought amongst themselves for the spoils, and the leaders elevated themselves above the proletariat.

But France has survived Robespierre, Napoleon and other demagogues into the present day and, for many years, the socialist party has dominated France.

But, in the last election, in 2017, centrist Emmanuel Macron was elected President.

So, where is France now with its grand socialist experiment? Well, surprisingly, for a country that’s so proud of “favouring the little man,” taxes are at 45% of GDP, much higher than other OECD countries. Social security tax rose as high as 71.3% of gross salary.

Although more than half of the population pays no income tax whatsoever, the government more than makes up for that with other taxes, which far exceed what exists in more capitalistic countries.

Today, France has had 220 years to sort out its “temporary dictatorship” by the proletariat and should now be the peaceful congregation of happy workers who treasure the lack of exploitation that’s the hallmark of the socialist ideal.

So, let’s have a look at recent events, to inform us as to how it’s going:

In these spontaneously-created protests, hundreds of thousands of citizens take to the streets each weekend, burning cars and generally behaving as irresponsibly as their government.

And yet, their central demand is entirely justified – they recognize that, in the government’s eyes, they’ve become milk cows and they’ve demanded a reversal in taxation.

In response, the government has offered a half-hearted suspension of the new tax in a manner and tone that’s ominously reminiscent of “Let them eat cake.”

So – socialist/globalist France appears to be imploding. Is it time to dust off the guillotines?

Well, we may not be at that point just yet, but neither are we far off.

The EU experiment is nearing its sell-by date, the French government is broke. The State has flung the doors open to tens of millions of refugee immigrants, and made the commitment to pay their way, with funding that simply doesn’t exist.

Although the French people may not be aware of it, these are in fact, “the good old days.” What’s headed their way will be decidedly more oppressive and more chaotic.

At present, although there’s considerable anger and disruption in the streets of France, the proletariat are not quite ready to storm the Bastille, but that would take little additional provocation at this point.

But, it’s important to note that, in 1789, once this had occurred – once blood had been spilt and the head of Governor de Launay had been raised upon a pike, the die was cast and Mr. Robespierre would soon turn beheading into a cottage industry.

Whenever we see such developments brewing, it’s wise to review previous historical events. If we do so, we find that revolutions do not come as pronouncements, followed by troops in different-coloured coats marching off to battle to determine the winner.

Revolutions begin with mounting dissatisfaction by a small percentage of a people, then are triggered by an angry moment in time, from which there is no return.

France may be only one event away from this eventuality. And if we recognise this, we can more easily gauge how far away other countries may be.