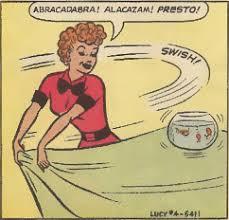 Newton’s first law of motion states that an object at rest tends to stay at rest.

Therefore, if a tablecloth is spread out on a table and an object, such as the fishbowl above, is placed on that tablecloth, the fishbowl will tend to “want” to remain right where it is.

If the tablecloth were to be yanked away quickly, the fishbowl would move very little. Inertia, having been overcome by the tablecloth, would then be overcome, but the fishbowl, already at rest, would tend to remain right where it had been before – on the table.

And the same is true of human nature. If a government or an economic system collapses, the populace will experience an immediate shock of change, but their tendency will be to adapt as quickly as possible to maintain their previous situation as much as can be accomplished.

Has the government collapsed? Create a new one, possibly on similar principles as the previous one (hopefully with revisions made, to prevent the next government from making the same self-destructive mistakes a second time.)

Has the economy collapsed? Throw together whatever new form of economy works best until a more solid one can be created. This could mean relying temporarily on barter, but might mean the establishment of a safer form of currency, such as precious metals. And, again, when a new currency is introduced, revisions might be made as to who controls it, in order to assure that the same mistake is not repeated.

But, these are natural calamities that happen from time to time in civilization and, as long as the people dealing with the re-establishment of the government or economy are motivated in the direction of the benefit of the populace, there’s every chance that a solution will be created that would be implemented quickly, might minimize damage and, hopefully, be better than the last version.

After all, if left to their own devices, people will come up with whatever system serves them well.

But, of course, we rarely witness the above scenario with regard to governments and economies. What we do see playing out, time after time, in one era or another, in one geographical location or another, is something quite different.

Historically, what we’ve seen is that government performs the political and/or economic equivalent of pulling the tablecloth away slowly.

And, of course, anyone who’s familiar with the old tablecloth trick understands what will happen. The fishbowl ends up smashed on the floor and the fish are left gasping for their last breaths.

This latter fact illustrates vividly why no one should ever pull away the tablecloth slowly.

And yet, in generation after generation, humankind is repeatedly suckered into a situation in which their government does exactly that.

The way it works is that the government first says, “It’s too troublesome for you to run your own lives; leave it to us and we’ll look after you. We’ll take care of all those pesky details of life that are nuisances for you now.”

Then, clearly, the people need a central fire service. They also need roads and community buildings. And, of course, these all cost money, so taxes are implemented.

Then they are raised, as the costs of such services inevitably increase over time.

Then, an increasingly expansive list of other services is put forward – assistance for the poor, retirement funds, universal health benefits, etc. Soon, it becomes “necessary” to increase taxes to pay for the ever-expanding list of services the government controls.

Throughout this process, the populace nods as each new “benefit” is introduced. And, since the process is gradual, they almost invariably fail to worry that the tablecloth is in motion and that their fishbowl is closer to the edge of the table than it was before.

But, in the meantime, the political leaders are continuing to pull the tablecloth and are aware that the fishbowl is nearing the edge. At this point, if they were responsible people, they’d say, “Oh-oh, we’ve been a bit too greedy and we’ve put you folks in danger. But, at this point, it won’t do any good for us to tax you less and cut out the services that have been promised to you. At this point, we need to stop pulling entirely.”

And, of course, were they to do that, two things would occur. First, the populace would be up in arms at their entitlements being cut off.

Second, the political leaders would be out of a job.

With no more services to provide, taxation would cease to have validation. The political leaders would be in far greater danger from a cessation of movement than the people themselves.

Well, most of us, as we become adults, recognize that, in order to live, we must become productive. That’s what turns us into responsible people. But, remember, political leaders never learn this lesson. They go straight from being parasitical as children to being parasitical as adults. When the jig is up and the fishbowl is nearing the edge, they act the way they’ve always acted – as parasites. Only now, they realise that it’s all about to end very soon. Therefore, it’s time to get a last squeeze of the lemon before it goes dry.

At that point, they ramp up the economy through the creation of debt. They also increase taxation dramatically, with the claim that benefits must be increased.

They then do their best to get themselves out of the way as the last pull of the tablecloth sends the fishbowl over the edge.

This, of course, is why it’s so overwhelmingly common for political leaders to take a hike just as their economies and/or governments are collapsing. Regardless of the era, regardless of the geographical locale, whether the leader be Kaiser Wilhelm II, the Shah of Iran, Fulgencio Batista or Idi Amin, those who caused the problem tend to have a well-funded exit plan in place and are rarely themselves trapped in the fishbowl.

Since this has been the nature of governments throughout history, we’d be wise to observe the situation objectively when assessing the country in which we live, and, we’d be wise to concurrently assess how things are going in other countries. If our home country is literally getting close to the edge, we might wish to make a move before the inevitable occurs.

Historically, in any era, there are always some countries that are getting near the edge and others that are not. The choice for anyone whose situation is reaching its expiry date might wish to vote with his feet, rather than to await the final pull of the tablecloth.

The coming economic and political collapse is going to be much worse, much longer, and very different than what we’ve seen in the past.