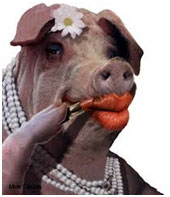 In recent years, Portugal, Italy, Greece, and Spain have collectively been referred to by economists as the “PIGS.” Whoever originally concocted this nomenclature might just as easily have named them the “GIPS,” or the SPIG,” but then, whoever it was, wished to make a point.

In using porcine nomenclature to describe the countries of southern Europe, it may be equally valid to refer to their neighbours to the north as also being of the same species, as their governments, through the EU, regularly demonstrate many of the traits that we, as humans, attribute to sus scrofa domesticus.

Certainly, whatever bailouts have been provided by the EU to assist the Mediterranean members, have been done, not out of compassion, but out of a desire to control. In fact, the EU often appears to be a thinly veiled Teutonic ruler over Europe, with the tacit support of the other members.

The EU began as a mutual agreement over trade that had quite a bit of merit, but has, in recent decades become something of a monster that the majority of Europeans would put to death if they could. At this point, it has become apparent that the EU has, in its short history as a governing body, constricted free trade, forced equalisation of legislation upon differing cultures, and created massive debt. (Quite an achievement in only twenty years.)

And so, the amount of lipstick necessary to pretty up the sow at this point has become considerable. Dissent has reached such a point that the primary movers of the EU are now falling over each other in the hope of trying to continue to make the EU construct appear either workable or desirable.

The US Follows Suit

Meanwhile, across the pond in the US, the EU has both supporters and detractors, but, even there, the latter group are on the increase. However, there does seem to be a common impression that, although the US also has considerable significant economic problems, it is still (more or less) the eagle that it began as, some 237 years ago.

For those of us who hail from countries outside both the US and Europe, the US eagle has been seen, in recent decades, as having undergone a radical change. The feathers are long gone and the body of the eagle seems to have grown quite chubby and pink. And, although, in decades gone, the US did sport a bit of lipstick, in the twenty-first century, the makeup artists have clearly been applying the lipstick with a trowel.

For many investors, especially those of a contrarian bent, the world is becoming a smaller place. Where the former “Free World” was teeming with opportunities for investment, today, investors must work quite a bit harder to find investments that might be safe from the questionable economic future of Europe and the US (and those countries whom they dominate economically).

And so, for those of us “on the outside,” all eyes are on the pig with the most lipstick, as the primary barometer for economic calamity. Whilst it is quite likely that there will be an economic collapse in Europe prior to one in the US, it is the American disaster that promises ultimately to be the greater of the two, and to affect the outside world the most dramatically.

Those of us who have predicted this fall from grace for many years are being proven correct in many of the events we had predicted. However, the most significant events have not yet played out. Over the years, those prognosticators who have been the most accurate have shared a similar failing. Each one (myself included) has often estimated that the events would occur earlier than they ultimately have. The prediction of the events themselves has been largely accurate, but the predictions regarding timing have often been premature.

So, it could be justifiably stated that, whilst we might be able to predict the names of the dominoes and even their order, we should all be as vague as possible in offering a timeline for their falling when we forecast the events we foresee.

We have certainly all perceived that we are presently in the eye of an economic hurricane (as Doug Casey so aptly describes this period), and we have been waiting to exit the eye into the second half of the hurricane – the half that will bring the greatest destruction. As inadvisable as it would be to say that that time is nigh, the warning signs are out there that that is exactly the case. Until the end of 2012, the economic decline has been characterised by one governmental abuse after another, but we are now, for the first time, seeing those individuals who are highly connected showing that they are heading for the exit doors of a system that, until recently, they described as “sound.”

On 6th February, 2013, Money News reported on this developing trend.

Warren Buffett, who has been a cheerleader for US stocks for quite some time, is dumping shares at an alarming rate. He recently complained of “disappointing performance” in dyed-in-the-wool American companies like Johnson & Johnson, Procter & Gamble, and Kraft Foods.

Fellow billionaire John Paulson, who made a fortune betting on the subprime mortgage meltdown, is clearing out of US stocks too. During the second quarter of the year, Paulson's hedge fund, Paulson & Co., dumped 14 million shares of JPMorgan Chase. The fund also dumped its entire position in discount retailer Family Dollar and consumer-goods maker Sara Lee.

… Billionaire George Soros recently sold nearly all of his bank stocks, including shares of JPMorgan Chase, Citigroup, and Goldman Sachs. Between the three banks, Soros sold more than a million shares.

Both Mister Soros and Mister Buffet are well-known for advising investors against the purchase of gold; yet, they are now buying with both hands, themselves.

Once you hit 10% inflation, 10-year Treasury bonds lose about half their value. And by 20%, any value is all but gone. Interest rates will increase dramatically at this point, and that will cause real estate values to collapse. And the stock market will collapse as a consequence of these other problems.

Demographics expert Harry Dent is convinced that stocks are grossly overvalued right now. He believes that the stock market could be down 60% by this time next year.

According to Doug Short, VP of Research at Advisor Perspectives, stocks are 44% to 65% overvalued.

Other comments I have received in the last week from associates:

There is nothing but air under this baby. When I saw the negative Q4 GDP figures, I knew the game is over. The year total was only 1.5%… This one could be like '87 where you wake up one day and the Dow is down 500.

Credit default swaps are soaring just as we saw during the last financial crisis. Insurance on the debt of major European banks has hit historic levels… even higher than when Lehman Brothers collapsed.

It may well be that the long-awaited other side of the hurricane is about to arrive. It would be well to remember that this is the way it played out in 1929. The Buffets, Soroses, and Paulsons of their day claimed that all was well, right until the point when they, themselves, headed for the exit doors.

But, this time around it will all happen more quickly than in 1929. Today, with the internet, everything is likely to happen very fast. Panic is an emotion that is, above all, unpredictable. There will be overnight panics that we can predict in advance, but there will also be overnight panics that will be beyond all reason – random occurrences that somehow go viral, and, when they happen, they will be a surprise to everyone.

There are likely to be events that we have been predicting, but, in addition, we may well see a veritable flock of black swans from out of the blue.