He called the Saudi regime the world’s biggest funder of terrorism.

He also said the Saudi government uses “our petro dollars—our very own money—to fund the terrorists that seek to destroy our people, while the Saudis rely on us to protect them!”

At another point, Trump said, “Who blew up the World Trade Center? It wasn’t the Iraqis, it was Saudi [Arabia].”

Trump also criticized Hillary Clinton for taking Saudi money for the Clinton Foundation. (They were its biggest “donors.”) He even challenged her to return the money.

He also famously got into a Twitter spat with a prominent member of the Saudi royal family, Alwaleed bin Talal.

As a candidate, Trump blasted the Saudis countless other times.

But, after he took office, Trump did a complete 180. He stopped criticizing the Saudis. In fact, he’s now singing their praises.

It’s bizarre… as if someone put a severed horse head in his bed.

Mere months after criticizing the Saudis, he was on Air Force One headed to Saudi Arabia to do the sword dance with his new friends.

It was his first foreign trip as president. 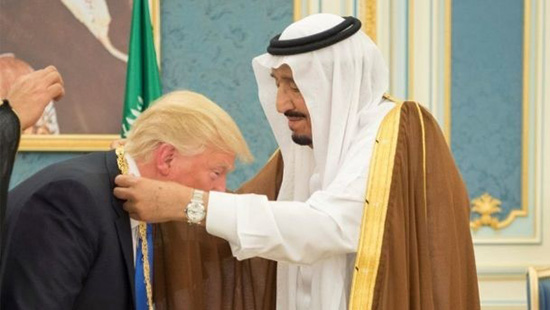 Trump’s about face was astounding. But his newly adopted deference to the Saudis is no different than Obama’s, Baby Bush’s, or any previous president’s. 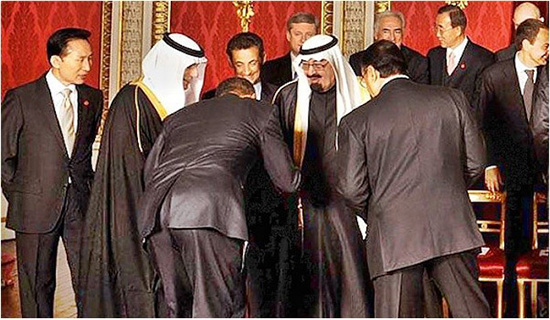 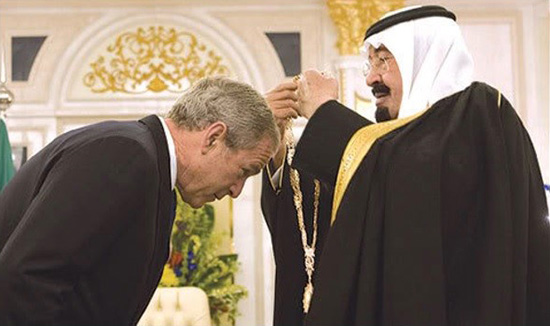 Today, I’ll tell you why Trump made such an abrupt turnaround. I’ll also explain why the Saudis get special treatment from the US Deep State.

“As Good As Gold”—From Bretton Woods to the Petrodollar

It’s been rightly said that he who holds the gold makes the rules.

After World War 2, the US had the largest gold reserves in the world, by far. Along with winning the war, this let the US reconstruct the global monetary system around the dollar.

The new system, created at the Bretton Woods Conference in 1944, tied the currencies of virtually every country in the world to the US dollar through a fixed exchange rate. It also tied the US dollar to gold at a fixed rate of $35 an ounce.

The dollar was said to be “as good as gold.”

The Bretton Woods system made the US dollar the world’s premier reserve currency. It effectively forced other countries to store dollars for international trade, or to exchange with the US government for gold.

However, this pseudo gold standard was doomed to fail.

Not surprisingly, runaway spending on warfare and welfare caused the US government to print more dollars than it could back with gold at the promised price.

By the late 1960s, the number of dollars circulating had drastically increased relative to the amount of gold backing them. This encouraged foreign countries to exchange their dollars for gold, draining the US gold supply. It dropped from 574 million ounces at the end of World War 2 to around 261 million ounces in 1971.

To plug the drain, President Nixon “temporarily” suspended the dollar’s convertibility into gold in 1971. This ended the Bretton Woods system and severed the dollar’s last tie to gold.

The “temporary” suspension is still in effect today.

This is why the Fed can print as much paper money as it pleases.

The death of the Bretton Woods system had profound geopolitical consequences. Most critically, it eliminated the main reason foreign countries stored large amounts of US dollars and used the US dollar for international trade.

At this point, oil-producing countries began to demand payment in gold instead of rapidly depreciating dollars.

It was clear the US would have to create a new monetary system to stabilize to the dollar.

So, the US government concocted a new scheme—the petrodollar system. It gave foreign countries another compelling reason to hold and use the dollar.

For President Nixon and Secretary of State Henry Kissinger, it was a geopolitical and financial masterstroke.

From 1972 to 1974, the US government made a series of agreements with Saudi Arabia that created the petrodollar system.

The US handpicked Saudi Arabia because of the kingdom’s vast petroleum reserves and its dominant position in OPEC—and because the Saudi royal family was (and is) easily corruptible.

In essence, the petrodollar system was an agreement that the US would guarantee the House of Saud’s survival.

In exchange, Saudi Arabia would:

Oil is the largest and most strategic commodity market in the world.

As you can see in the chart below, it dwarfs all other major commodity markets combined. 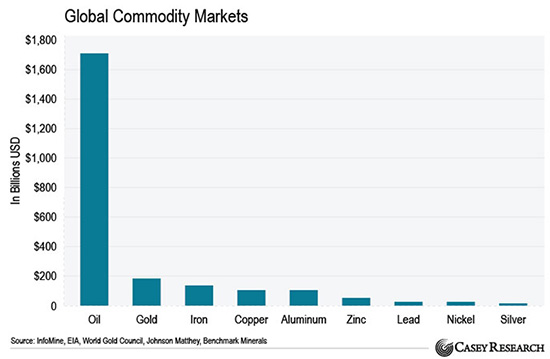 Every country needs oil. And if foreign countries need US dollars to buy oil, they have a very compelling reason to hold large dollar reserves.

Think about it… If Italy wants to buy oil from Kuwait, it has to purchase US dollars on the foreign exchange market to pay for the oil first.

This creates a huge artificial market for US dollars.

In part, this is what differentiates the US dollar from a purely local currency, like the Mexican peso.

The dollar is just a middleman. But it’s used in countless transactions amounting to trillions of dollars that have nothing to do with US products or services.

In addition to nearly all oil sales, the US dollar is used for about 80% of all international transactions.

This gives the US unmatched geopolitical leverage.

The petrodollar system is why people and businesses everywhere in the world take US dollars. Other countries have had little choice over this.

Today, the biggest US exports are dollars and government debt. The US government can create unlimited quantities of both… from nothing.

It requires no effort to create US dollars, which can then be exchanged for real things like French wine, Italian cars, electronics from Korea, or Chinese manufactured goods.

Ultimately, the petrodollar boosts the US dollar’s purchasing power. It entices foreigners to soak up many of the new currency units the Fed creates.

The system helps create a deeper, more liquid market for the dollar and US Treasuries.

It also helps the US keep interest rates artificially low. This allows the US government to finance enormous and permanent deficits. Otherwise, this would be impossible without destroying the currency through money printing and inflation.

The petrodollar has also allowed the US to spend astronomical amounts of money on welfare and other benefits for over half of its population. It gives Americans a much higher standard of living than they would have otherwise.

In short, the petrodollar is the ultimate enabler of big government.

The US government could never have become as powerful without it.

It’s hard to overstate how much the petrodollar system benefits the US. It’s the bedrock of the US financial system.

And it’s the reason the US political elite pamper the Saudis.

Bretton Woods lasted 27 years. So far, the petrodollar has lasted over 40 years.

I think we’re on the cusp of another paradigm shift in the international financial system. It will be at least as fundamental as the end of Bretton Woods in 1971.

For decades, the petrodollar system has allowed the US government and many Americans to live way beyond their means.

The US takes this unique position for granted. But it will disappear once the petrodollar system breaks down.

When that happens, I expect severe inflation.

This will likely be the tipping point…

Afterward, the US government will be desperate enough to implement capital controls, people controls, nationalization of retirement savings, and other forms of wealth confiscation.

I urge you to prepare for the economic and sociopolitical fallout while you still can. Expect bigger government, less freedom, shrinking prosperity… and possibly worse.

It probably won’t happen tomorrow. But it’s clear where this trend is headed.

One day soon, Americans may wake up to a new reality.

Once the petrodollar system kicks the bucket and the dollar loses its status as the world’s premier reserve currency, you will have few, if any, options.

The sad truth is, most people have no idea how bad things could get, let alone how to prepare…

Yet there are straightforward steps you can start taking today to protect your savings and yourself from the financial and sociopolitical effects of the collapse of the petrodollar.

We recently released a special Guide to Surviving and Thriving During an Economic Collapse. Click here to download the PDF now.

These are the kinds of returns you can achieve when you bet on the right side of a paradigm shift in the international monetary system.

We recently released a video showing how this could all go down. Click here to watch it now.

China Is Days Away From Killing the Petrodollar

A full-blown economic war between the US and China is likely. But the US underestimates China…

Gold Will Soar… As China Kneecaps the Dollar

China is about to launch a new alternative financial system—here’s how it could mortally wound the US dollar.

The Cardinal Sin of International Finance

One day soon, Americans will wake up to a new reality…