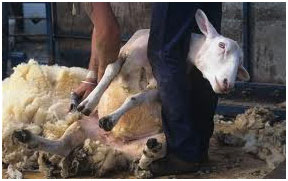 Recently, Ed Steer of Ed Steer's Gold and Silver Daily received a letter from a reader, Harry Morgan, describing a problem that he encountered in selling ten ounces of silver to a local jewelry store.

Mr. Morgan was successful in selling his silver to the store, but before the transaction could be made, he had to submit to mandatory fingerprinting. He then found that payment for precious metals in excess of $600 must be by cheque, necessitating a deposit into a bank account.'

Now, it should be said that neither the jewelry store manager, nor the bank manager suggested that the selling of precious metal was a crime; only that, if a sale is to take place, it must be recorded. And it is safe to say that neither the store nor the bank would have a vested interest in creating such policies on their own, as such record-keeping does not increase the profits of their respective businesses. It only increases unproductive paperwork.

It would seem clear that the culprit here is the State. In the US, several states have either passed laws or are in the process of drafting laws to record the sales of precious metals.

The reader might well ask, “Why on earth would a government seek to control the sale of a few ounces of silver?” Today, the return from the sale of a few ounces of silver is practically pocket change to a jewelry store, pawn shop or bank. And, under this law, the bankers have been ordered to treat the depositor with the same scrutiny that they would a drug baron who appeared to be laundering drug money. They are achieving nothing in terms of the economy. All they are succeeding in doing is denying the depositor a basic freedom, whilst implying that there is something wrong in the purchase or sale of precious metals.”

In answering this question, it may be helpful to refer to Sir Arthur Conan Doyle, who, the reader may remember, was the author of the Sherlock Holmes novels. In those novels, Sir Arthur occasionally had his sleuth say,

“When you have eliminated the impossible, whatever remains, however improbable, must be the truth.”

If we use Sir Arthur's logic, when we have eliminated the impossible in this case, what we are left with, however improbable, is that the State's objective is indeed to achieve what it is achieving – denying the depositor his liberty, whilst implying that there is something inherently wrong with the purchase or sale of precious metals.

But what is the benefit to the authorities in doing so? Certainly, in the future, once the sheeple become accustomed to these restrictions as being normal (and therefore acceptable), all that would be necessary to cease the sale of precious metals would be to disallow deposits of such nature to banks. In a sense, this would render investment in precious metals valueless, as “value” exists only in relation to an ability to sell the investment.

In addition, by treating those who buy and sell precious metals in the same way as drug lords are treated, it becomes easy to convince the general public that it was a good thing the metals investors were stopped from doing what they were doing.

The Objective Is Control

The objective here is control. And those citizens who find a way to work their way out of an economic disaster (through precious metal investment or any other means) represent a threat to that control.

If the sheep are to be sheared, they must first be penned in so that they cannot escape.

It should be mentioned that the US is not alone in increasing economic restrictions to its people. Whilst the US might be the most visible example, as it is, in a sense, the empire of our time, similar restrictions are being imposed by most governments that are finding themselves on a waterslide into an economic sewer. Argentina is a prime example, but the EU countries and others in the world are following suit.

A mere decade ago, I was rarely asked whether it might be a good idea to purchase and store precious metals. On the rare occasions that I was asked, my answer was invariably, “Yes, absolutely. You may be regarded as an idiot by most everyone you talk to about your investment in gold and/or silver, but, in time, it will become clear that precious metals are the economic 'Alamo' when many of the world's economies begin to implode.”

Today, of course, the discussion has advanced a few steps. Many people around the world have chosen to purchase gold and/or silver. The question now is more likely to be, “How do I store the metal once I own it?”

Before offering an answer to this question, a further question must be posed: “What country do you live in?”  Whenever the answer is, say, “The US,” “France,” or “Argentina,” my response is that, in those countries, it soon may be unsafe to physically hold precious metals at all. It is likely that, either through confiscation or through laws prohibiting sales, any remaining owner may as well own dirt, as dirt would be more saleable.

At this point in the narrative, the precious-metal naysayers may be likely to state, “I told you so – gold and silver are a mistake – don't invest in them,” but they would be incorrect. Precious metals, along with real estate, are amongst the safest choices (if any investment is safe in these times) as repositories for wealth. However, if one resides in a country that is now tightening the vice on the free market, it may be wise to internationalise one's storage of wealth. (Wealth that is overseas is difficult for a home government to confiscate.)

Whenever a country is reaching the end of its lifecycle and is verging upon collapse, the penultimate phase is control. When the leaders recognise that the final stage (collapse) is on the horizon, extreme control is employed as a means of both delaying the collapse and making its inevitability safer for the leaders. After all, once an entire nation of people realise that they have been hoodwinked by their leaders, they become less willing to continue to simply “go along,” as they had been during the period of prosperity.

The Pen Of Control

Historically, in the penultimate phase of a nation, a “pen” of control – laws and regulations – is created. It is generally only after the completion of the pen that the sheep realise that they are to be sheared.

Again, historically, the numbers of people who recognise that a pen is being created to contain them are small. Typically, such a country experiences what is sometimes termed a “brain drain,” in which the educated, the entrepreneurs and the far-sighted, quietly internationalise in the penultimate stage.

For many countries of the First World, that stage is occurring now.