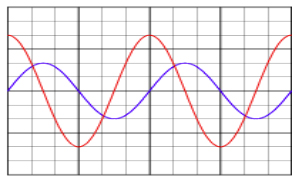 Almost daily, someone (often a European or North American) comments to me that the world is falling apart. The government is becoming dictatorial, the people are becoming more socialistic and political correctness is no longer an option, it’s a mandate and you’d better get on board.

This trend is not by any means imagined, but it would be incorrect to say that “the world is falling apart.” If we spend time travelling the world, what we see is that parts of it (primarily the former “free world”) is unquestionably in a state of political, economic, social and moral decline.

The good news is that many other parts of the world are impacted less; others are hardly affected at all and, in still other cases, countries are thriving.

What’s often missed, due to myopia, is that, in any era, there are always some countries that are burning out at the same time as others are on the rise.

Cultures and nations pass through cycles, much like the sine waves above. Any nation that undergoes a social, political and economic collapse ends up hitting the skids and staying there for a while. Often, the spoiled, complacent generation is unable to affect a recovery. However, the next generation learns to recognize that the only way that they can move ahead is to get out and work. Be ambitious, be self-reliant, act responsibly and, eventually, you’ll improve your life.

The next generation has this example to build upon and generally takes it to the next level, operating on the same principles. However, after several (possibly many) generations of this, prosperity is great enough that the next generation doesn’t have to work as hard. Their parents hand them enough that they can largely cruise through life. (This turning point occurred in Europe and North America in the 1960’s.)

At that point, politicians, who tend to be good at reading the mood of the populace, begin promising ever-greater entitlements – thus assuring the complacent generation that, not only do they not have to work hard, the very suggestion of hard work and self-reliance is unfair.

Another generation or two downstream and the decline has morphed into an apathetic, whining generation that wants to be told that it’s possible for everything to be free and that anyone who suggests otherwise needs to be punished for their thoughts. (Sound familiar?)

This overall abandonment of responsibility (egged on by political leaders) invariably results in political, economic, social and moral decline, ending in collapse.

This natural cycle is illustrated in the sine waves above. Most countries are like the blue sine wave. The amplitude is moderate – the country doesn’t rise to a great height in terms of prosperity, but then, it also doesn’t sink to great lows. On the other hand, the most dominant countries (and empires) are more like the red sine wave – they rise to a great height, but when they fall, the amplitude of the fall is equal to that of the rise.

At any time in history, some countries are on the way up; some are on the way down. I personally grew up in the 50’s and 60’s, a time when the “free world” (the UK, US, Canada, Australia, etc.) was riding high. All of these nations are now in decline and, as the reader may have noticed, that decline is becoming increasingly rapid.

Back then, countries like Russia, China and Cuba were heavily in a state of socialistic decline. They’ve since bottomed and are now experiencing their rebirth. Each one is expanding into more of a free-market country. Each is experiencing greater prosperity and the people of those countries understand that the way forward is hard work, tenacity and self-reliance.

Looking back at the image above, an interesting aspect is that, in addition to the amplitudes of the red and blue waves being different, their rise and fall are independent of each other. Each begins its fall at a different time from the other and, consequently, their eventual rise also begins at a different point.

As we know, the former “free world” countries have been closely linked for generations and so it shouldn’t be at all surprising that they’re timing is roughly the same with regard to their decline.

So, what if we consider that there are roughly two hundred countries out there and that many are only peripherally connected to those countries and others are hardly impacted by them at all? What we’d see, if we could draw all their sine waves on the above chart, would be that, at any time in history, there would be some countries, large and small, that are beginning their upward cycle (as was, say, the US in the first half of the 19th century); others are becoming highly productive (as was the US in the first half of the 20th century); some have turned the corner (as the US did in the latter part of the 20th century), and some are speeding up in the decline and nearing collapse (as is the US presently).

And, of course, our attention tends to be focused on the US first, as it’s presently the world’s foremost empire and is well along in its roller coaster ride to the bottom. But, along with it, we see the UK, Europe, Canada, etc. tied to the coattails of the US and also along for the ride.

So, does this spell doom for us all? Well, the first part of the answer is that, historically, once the downward stage of the cycle has begun, it almost never reverses. That being the case it would be foolish indeed to imagine that our own country (whatever it might be) will be the first ever to magically reverse and go into premature recovery mode.

(As the old truism goes, an alcoholic must hit bottom before he can begin recovery. The same has been true for nations for thousands of years.)

But there’s a second half to the answer, which is that, if we do an analysis of the many other nations in the world, we find that, at any moment in time, there are those that are on the rise. Some, in fact, are just beginning their rise and some are further along. If we’re pioneering by nature, we may be interested in one that’s just beginning its rebirth. If we’re seeking more creature comforts, we might pick one that’s further along on its upward trajectory, but still has a fair way to go before peaking.

Interestingly, this is all roughly measurable. For example, only a quarter century ago, Cuba was at rock bottom – socially, economically and politically. Life was far from “free.” Whenever I was there during that period, Cubans would criticize the ever-declining conditions, but, when they did, they’d first look around to see who might be listening. Today, Cuba is being quietly reborn. Prosperity is increasing, the free market is growing annually and, for the first time in decades, people do not always look around first before offering a criticism. The “fear” stage is giving up the ghost.

And, a quarter century ago, if I visited the US, people were generally buoyant, but had already become “concerned.” Still, if they had a criticism of conditions, they spoke out without any fear whatever. Today, those same people are quite a bit more worried about the political, social, economic and moral decline. And, tellingly, for the first time, political correctness is no longer an option, it’s a mandate and you’d better get on board. Those accused of an infraction of political correctness are often made to publicly apologise (whether they mean it or not). Some are ostracized. Some are fired from their jobs. Some are attacked in the courts.

And, for the first time, if someone criticizes the direction the country has taken, they may look around first to see who might be listening.

This is very telling, because, just as we can see in the sine waves above, there’s a point at which a formerly great country headed inexorably downward passes another country that’s headed upward. As difficult as it may be to imagine, that’s exactly what’s happened between the US and Cuba.

What this means is that, in ten years, it’s entirely possible that Cuba will be a demonstrably freer place to live than the US.

So, again, if we reside in one of the declining countries, are we doomed? Well, no, not at all. In looking at the bigger picture, what we see is that we’re by no means locked in where we are. As “ships pass in the night”, we have the choice to leave one and board another. It’s too early yet, for Cuba, but there are many other countries that are further along on their upward trajectory. They offer a far more positive future than those that no longer qualify for the appellation, “free world.”

Pack a bag. Get on a plane. Go to a few places you’ve never been that, for whatever reason, seem more attractive. But, in making your selections, choose those that are blossoming rather than those that are withering on the vine.