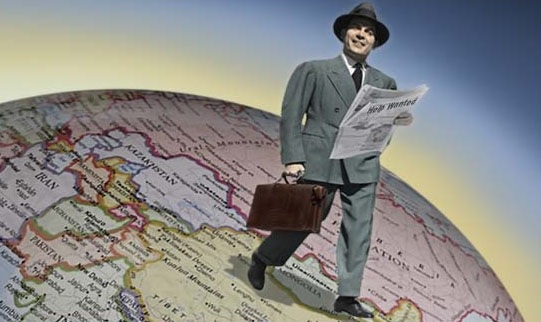 Until recently, those moving from one country to another were generally moving from a Second or Third World country to a First World country, often for the purpose of economic opportunity. Not surprising, then, that these people seemed eager to do whatever was necessary to fit in, in their new home.

However, we are living in a time when the roles are beginning to reverse. A growing number of people are now fleeing the shores of First World countries to move to what have traditionally been regarded as the Second and Third Worlds.

The difficulty that arises in this change is that the customary behaviour of First Worlders is often out-of-keeping with those in their newly adopted homes.

This is not to say that all First Worlders are always seen as arrogant boors when they are abroad, but enough of them are that, in many countries, locals are cautious of new residents from First World countries. Cautious enough that, in order to be accepted, it might be advisable for those considering expatriation to consider how others may see them.

In actual fact, whilst caution exists abroad, it can be an opportunity for the expatriate, for the traits that are most valued in such countries are fairly consistent. And should a new resident show a genuine desire to display such traits, he might find that locals are pleasantly surprised and will, in fact, be especially welcoming.

In addition, the task is not a difficult one. The primary traits that apply are few, and whilst they may possibly require a conscious effort, they often represent the difference between acceptance and a lack of acceptance.

In order of their importance, they are:

Most people in Second and Third World countries are not as aggressive in manner as those from First World countries. Whilst a go-getter attitude is generally seen as an asset in the First World, it is often looked upon as arrogance in other parts of the world. The same approach that will assure that you will get a quick sandwich-to-go in a New York deli will be likely to engender disdain in Chiang Mai, Thailand, or Quito, Ecuador.

For many people who expatriate, dropping the “can-do” attitude is actually a relief. Those who are by nature low-key, considerate people will find it easiest to adapt. Those who are more demonstrative by nature may find it more difficult. Either way, the effort will engender rewards.

Kindness, a close relative of humility, goes just as far. Genuine consideration of others greatly increases chances of acceptance.

2. A Desire to Absorb the Culture

Brits who go on holiday to Majorca are famous for trying the local beer and saying, “It’s not proper beer—it’s rubbish.” This does not endear them to the locals. Similarly, Americans who examine a menu in a Caribbean restaurant and say, “Conch? Turtle? Do you people actually eat this stuff?” are similarly unlikely to gain favour.

It’s easy enough to find something on the menu that’s more familiar. If you’re not especially adventurous in your diet, there’s always something that you can order and later praise as having been to your liking.

Other cultural differences are the same. Consider being less demonstrative about those items that aren’t to your liking, whilst praising those that are.

3. An Effort to Speak the Language

This item requires the greatest effort, as it may require a re-education. However, even if the country you expatriate to is not English-speaking and you know absolutely nothing of the local language, if you’re seen to be trying your best to be learning words and phrases in the local language, the effort will be noticed. Locals may still find it frustrating to communicate with you, but they’ll appreciate that you’re trying. The result will be greater acceptance. More doors will open for you; fewer will close.

There will, of course be those who offer an immediate knee-jerk rejection of all of the above. In response to #1, Humility, I once received the comment, “I’m not going to suck up to anyone. I was in Uruguay for two years. I opened a business and spent money in the country. They should have rolled out the red carpet for me.” He was bitter that his investment had gone to waste; he had left after two years, as he could never seem to melt the icicles on Uruguayans. Had he simply left his vanity and pride at the border, he might have benefitted from the natural generosity and kindness of the Uruguayan people. He failed to understand that simple consideration and “sucking up” are poles apart.

Regarding #2, A Desire to Absorb the Culture, I was once advised by a British expat, “I’m not eating crap food to please anyone.” In fact, he didn’t need to. He was not overly fond of the fatty meat cuts he found in Argentina, but rather than being overly critical, he could have easily said, “I’m not much of a red meat eater. I’ll have some pasta and a glass of Tannat. Eating in Argentina always means wonderful wine.”

Regarding #3, An Effort to Speak the Language, I have an associate who is not especially talented in linguistics. He was advised by a countryman, “If you’re in South America, as soon as they speak, just say, ’No Spanish.’ Then they have to use English to talk to you.” Which they will do. Unfortunately, the message to the locals is, “I don’t care if I am a guest in your country; you have to adapt to suit me, not the other way around.” Whilst most locals will do just that, a much better relationship could be forged by simply learning to say, “Lo siento, mi español no es muy bueno. ¿Habla inglés?” (I’m sorry, my Spanish is not very good. Do you speak English?)

The use of simple courtesy creates an entirely different relationship, whether it be with a waiter in a restaurant, a government official, or anyone else.

We have the Internet. We can look up whatever useful phrases we need to use to demonstrate the fact that we understand we’re guests and that we wish to be considerate.

All the above is, or should be, basic common sense. However, for all of us, ingrained ideas about “the way things should be” at times get in the way of our acceptance and, therefore, our progress in other jurisdictions.

There’s a great benefit in being a guest in another country, as the government tends to treat us better than it treats its own citizens. However, in our day-to-day affairs, it behooves us to remember that we’re guests. We need not kowtow, nor suppress our beliefs and opinions; we need only to treat our hosts with the same courtesy with which they treat us.

The world is your oyster, and there are very attractive jurisdictions that are cause for optimism. That’s what International Man is all about—making the most of your personal freedom and financial opportunity around the world. The free IM Communiqué is a great place to start.