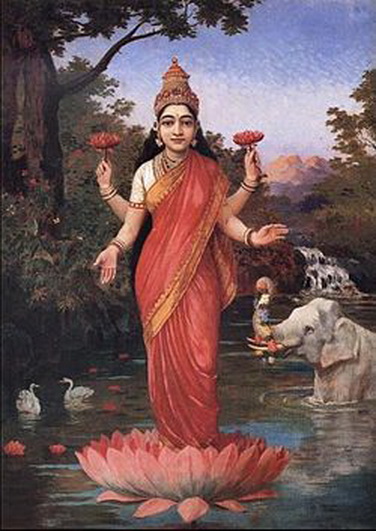 For centuries, East Indians have regarded gold as the primary source of wealth. All Indians own gold if they can afford to. They keep it as close as possible, sometimes in coin form, but often as jewellery, since “wearing wealth” means that it can be kept very close. They’re often especially reluctant to trust banks to hold their gold.

Hindus make up 80% of India’s population and, to Hindus, gold is sacred. Lakshmi (pictured above) is the Hindu goddess of purity, prosperity and good fortune. Her symbol is gold, so gold plays an important part in Hindu ceremonial occasions and Hindus donate large amounts of gold to the temples in Lakshmi’s name.

In recent years, the Indian government has tried one ploy after another to gain control of the temples’ gold. The most recent ploy was a programme whereby the temples could deposit the parishioners’ gifts to Lakshmi in banks. The gold would then be melted down and the temples would be given cash in an amount that would exceed the value of the gold.

Sounds pretty good. In many countries, the average individual would be shortsighted enough to go for it, thinking that he would have a few extra rupees. Internationally, even some Prime Ministers have thought it a good idea. UK PM Gordon Brown sold England’s gold at the bottom of the market between 1999 and 2002. More recently, Canadian PM Justin Trudeau sold off all of Canada’s gold during a major downward correction as soon as he took office. (Two excellent examples of proof that it’s possible to be elected the leader of a major country and still be an imbecile.)

But, returning to India, those running the temples tend to be distrustful of governments. Most are also distrustful of bank storage, although some do store gold in banks. The majority of the gold that they hold, however, remains in the temples.

The Indian government has also attempted to tax the gold in the temples, but the temples, quite rightly, have stated that they don’t actually own the gold. They hold it in trust for Lakshmi. (Good luck trying to tax Lakshmi.)

Governments have no problem telling people what to believe, except when it has to do with religious belief. Then they get quite skittish. So, to date, the Hindu religion has been a major deterrent to governmental success in getting Indians to part with their gold. And will continue to be. (I don't think that, in my lifetime, they'll have significant success. If God says wealth and prosperity are to be respected, it's hard for the government and media to counter that belief. And Lakshmi continues to be rather firm as to God’s take on the subject.)

Elsewhere in the world, governments of most western countries have succeeded in convincing roughly half of their populations that wealth is evil and shameful. It’s okay for a rapper to wear several pounds of gold jewellery, but it’s immoral for the average person to have a few eagles or maple leafs stored for a rainy day.

That means that the average man’s wealth is at greater risk. Governments tend to be parasitic creatures with no moral compass whatever. They’ll do whatever they can to diminish the power of the individual and to separate him from his wealth. The system of taxation is essentially a shakedown operation.

The only limiting factor in any government taking everything you have is that political leaders do worry about their image. They want to appear to serve the electorate so that they can be re-elected. So, they have to tread lightly. They can even force their citizens to pay tax on income derived from another country by implying that if tax is not paid, the income must have been gained through money-laundering.

Likewise, they can take away your gold. All they need do is convince the majority of people in your country that your ownership of it is somehow evil. To date, no country has fully succeeded in doing this.

But, recently in the West, this idea has been growing some legs. The socialist ideal has been blossoming in the EU, US, Canada and elsewhere in the former Free World and, along with it, the irrational concept that “earned wealth is evil” has been taking root.

Pop stars and sports figures can have monetary reward heaped upon them without being in any danger of social persecution. And politicians can have expenses that run into the millions annually, plus a host of benefits that are unknown in the private sector.

Yet, the owner of a business, however small, is looked upon as someone who has somehow looted the populace if he sells a good or service for the purpose of profit.

This is, of course, an astonishingly irrational position for anyone to take. As Thomas Sowell has observed,

And that astute observation is from an academic (not a businessman) who grew up in Harlem.

What this means is that, for each of the jurisdictions above, those who have lived responsibly – those who produce more than they consume and save the difference - are in for a rude awakening.

In order for their governments to pay for the new socialism that’s on the way, they’re going to have to balance the equation by taking from someone and that someone will be the guy who has retained wealth (however great or small.)

His wealth will be taken from him for “the greater good.”

As every Indian - even those of limited means – understands, the greatest protection from such looting by governments is to liquidate assets and convert the proceeds into precious metals.

It’s unlikely that the average westerner will become a Hindu, but, if he’s wise, he’ll acquire his own personal Lakshmi in the form of precious metals storage and he’ll do so outside of his home jurisdiction, in order to have even greater insurance against confiscation.