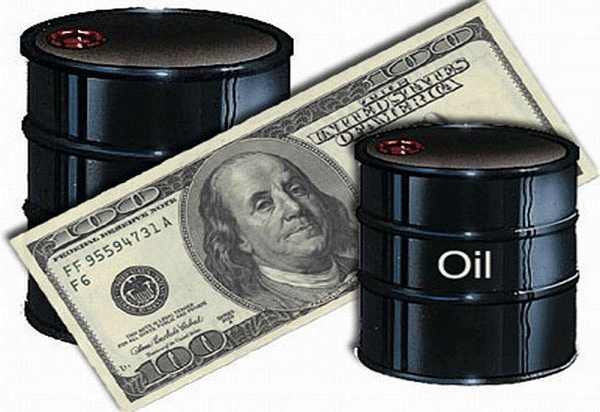 “The chaos that one day will ensue from our 35-year experiment with worldwide fiat money will require a return to money of real value. We will know that day is approaching when oil-producing countries demand gold, or its equivalent, for their oil rather than dollars or euros. The sooner the better.” (emphasis mine)

What Ron Paul is referring to here is the petrodollar system. It’s one of the main pillars that’s been holding up the US dollar’s status as the world’s premier reserve currency since the breakdown of Bretton Woods.

Paul is essentially saying that, if we want to better understand the answer to the elusive question of “When will the fiat US dollar collapse?“, we have to watch the petrodollar system and the factors affecting it.

At the recent Casey Research Summit, I had the chance to speak extensively with Dr. Paul on this subject, and he told me that he stands by his assessment.

I believe this is critically important, because once the dollar loses this coveted status, the window of opportunity to take preventative action will definitively shut for Americans.

At that moment, I believe the US government will become sufficiently desperate and implement the destructive measures that governments throughout the world and throughout history have all taken (overt capital controls, wealth confiscations, people controls, price and wage controls, pension nationalizations, etc.)

The three points to understand here are:

From Bretton Woods to the Petrodollar

The dollar’s role as the world’s premier reserve currency was established in 1944 by the Allied powers in what was known as the Bretton Woods international monetary system.

Being victorious in WWII and possessing the overwhelmingly largest gold reserves in the world (around 20,000 tonnes) allowed the US to reconstruct the global monetary system with the dollar at its center.

Countries accumulated dollars in their reserves to engage in international trade or to exchange them with the US government at the official rate for gold ($35 an ounce).

By the late 1960s, exuberant spending from welfare and warfare, combined with the Federal Reserve monetizing the deficits, drastically increased the number of dollars in circulation in relation to the gold backing it.

Naturally, this caused countries to accelerate their exchange of dollars for gold at the official price.

Nixon officially ended convertibility of the dollar for gold to halt the gold outflow, thus ending the Bretton Woods system, on August 15, 1971.

The US had defaulted on its promise to back the dollar with gold.

The central justification that the gold–backed dollar had provided as to why countries held the dollar in their reserves and used it as a medium of international trade was now gone.

With the dollar no longer convertible into gold, demand for dollars by foreign nations was sure to fall and with it, its purchasing power.

OPEC passed numerous resolutions after the end of Bretton Woods, stating the need to retain the real value of its earnings (including discussions about accepting gold for oil), which resulted in the cartel significantly increasing the nominal dollar price of oil in the wake of August 15, 1971.

If the dollar was to sustain its status as the world’s reserve currency, a new arrangement would have to be constructed to give foreign countries a compelling reason to hold and use dollars.

Nixon and Kissinger would end up succeeding in retaining the dollar’s premier status by bridging the gap between the failed Bretton Woods system and the emerging petrodollar system.

Between the years of 1972 to 1974 the US government completed a series of agreements with Saudi Arabia to create the petrodollar system.

Saudi Arabia was chosen because of its vast petroleum reserves, its dominant influence in OPEC, and the (correct) perception that the Saudi royal family was corruptible.

In essence, the petrodollar system was an agreement that, in exchange for the US guaranteeing the survival of the House of Saud regime by providing a total commitment to its political and security support, Saudi Arabia would:

The need to use dollars to transact in oil, the world’s most traded and most strategic commodity, provides a very compelling reason for foreign countries to keep dollars in their reserves.

For example, if Italy wants to buy oil from Kuwait, it would have to first purchase US dollars on the foreign exchange market to pay for the oil, thus creating an artificial market for US dollars that would not have otherwise naturally existed.

This demand is artificial, since the US dollar is just a middleman in a transaction that has nothing to do with a US product or service. It ultimately translates into increased purchasing power and a deeper, more liquid market for the US dollar and Treasuries.

Additionally, the US has the unique privilege of not having to use foreign currency but rather using its own currency, which it can print, to purchase its imports, including oil.

The benefits of the petrodollar system to the US dollar are indeed difficult to overstate.

What to Watch For

The geopolitical sands of the Middle East have been rapidly shifting.

In particular, you should watch the relationship between the US and Saudi Arabia, which has been deteriorating.

The Saudis are furious at what they perceive to be the US not holding up its part of the petrodollar deal. They believe that as part of the US commitment to keep the region safe for the monarchy, the US should have attacked their regional rivals, Syria and Iran, by now.

This would suggest that they may feel that they are no longer obliged to uphold their part of the deal, namely selling their oil only in US dollars.

The Saudis have even gone so far as to suggest a “major shift” is underway in their relations with the US. To date, though, they have yet to match actions to their words, which suggests it may just be a temper tantrum or a bluff. In any case, it is truly unprecedented language and merits further watching.

A turning point may really be reached when you start hearing US officials expounding on the need to transform the monarchy in Saudi Arabia into a “democracy.” But don’t count on that happening as long as their oil is flowing only for US dollars.

It was evident long before Nixon closed the gold window and ended the Bretton Woods system on August 15, 1971, that a paradigm shift in the global monetary system was inevitable.

Likewise today, a paradigm shift in the global monetary system also seems inevitable. By considering Ron Paul’s words, we will know when the dollar collapse is imminent.

“We will know that day is approaching when oil-producing countries demand gold, or its equivalent, for their oil rather than dollars or euros.”

It is very possible that one day soon, Americans will wake up to a new reality, just as they did on August 15, 1971.

Your goal should be to remove as much political risk from as many aspects of your life as possible so that you are not caught flat-footed when the next August 15, 1971 moment arrives.