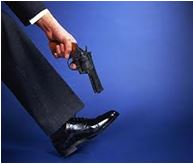 Dependency upon government is a disease. Once it has been caught, it becomes chronic and does not reverse itself in a population until the system collapses under its own weight.

For many years, frustrated colleagues of mine who are either conservative or libertarian have posed the rhetorical question, “When will those liberals learn?” Surely, at some point (they reason), liberals will recognise that bailouts, entitlements, and a “planned” society simply do not work. It's not even a question of whether liberalism is a laudable concept. The problem is that it just… doesn't… work.

Of course, my colleagues are correct in their appraisal of the liberal concept. Unfortunately, they are gravely mistaken in their belief that there comes a point at which the liberal “bubble” pops and suddenly all liberals wake up and smell the coffee.

Truth be told, as long as governments can benefit from maintaining a strong liberal consciousness in their citizenry, and as long as they can count on the media to maintain that consciousness, it will always be possible to convince liberal thinkers that, whatever negative events have taken place in a given country, they are the fault of the “enemy”—the non-liberal contingent.

But, surely, when there is clear-cut evidence that liberal policies have failed, liberals must accept that liberalism is an economic and social dead end. No, I'm afraid not. Let's look at how just three examples are likely to play out—not as we'd like to see them play out, but how they will play out in reality.

In each of the above cases, nothing is learned by liberals, except that they were right all along: “Don't trust the conservatives. They are evil and will destroy all good in society.”

These three examples should be sufficient to demonstrate that there will be no magic day when liberals figure out the failings of collectivism. In fact, quite the opposite will be true. Just as any government benefits from its own expansion of power, so governments and the media propaganda systems will ensure good that the EU and US will only become more liberal over time.

Throughout history, a basic truism has been evident: Dependency upon government is a disease. Once it has been caught, it becomes chronic and does not reverse itself in a population until the system collapses under its own weight.

A good example of this is East Germany in the early 1990's. In 1987, US President Reagan famously delivered the words in Berlin, “Mister Gorbachev, tear down this wall.” His words were heard so loudly that Mister Gorbachev did, indeed, tear down the wall. Almost immediately, West Berliners, thrilled to be reunited with their brothers to the East, created thousands of job opportunities for East Germans. East Germans were equally thrilled, anticipating that they might now have larger apartments, higher pay, and possibly own televisions and cars. However, East Germans did not respond well to the standards of the West, feeling that employers were too harsh in their requirements and the benefits were not what they had been used to.

East and west re-unified, but the transition was not a smooth one.

But, before we place all the criticism on liberals, it is well to note that, in both the EU and US, conservatives often tend to be just as dogmatic in their assessments. Whilst conservatives arguably may have a better grasp than liberals as to fiscal realities, they, too, are continuously programmed to adhere to a fixed group of perceptions.

Conservatives and liberals are both programmed to maintain ongoing opposition to each other. Conservatives are perceived as greedy and evil by liberals; liberals are perceived as naïve and stupid by conservatives. The more they can be polarised from each other, the more governments may make use of the polarity as a distraction from their own actions. The more conservatives and liberals place the blame on each other, the more governments may present themselves as the referee, whist, in fact, they do all they can to expand the mutual animosity.

The net effect is overall increased dominance by government. Under the two-party system, this dominance is not only tolerated by the populace, but encouraged.

The day never comes when a people convince their government to “lighten up.” Relief only comes when an overly-powerful governmental system collapses under its own weight.