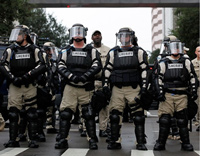 For those of us who reside outside of the EU and the US, developments in those jurisdictions in recent years have been troubling indeed.

To be sure, in much of the First World, developments have followed a similar pattern: a governmental trend toward fascism and socialism, dramatically expanding debt, ever-increasing destruction by the banking system, etc.

However, the US has gone well beyond most countries in one aspect: legislation that allows the government to transform itself into a full-on police state.

This began with the Patriot Act of 2001, a “temporary” act that was up for review in 2011, at which time, it was not only renewed, but its powers were expanded. (Nothing is more permanent than a temporary government measure.)

More sinister, however, was the passage of the National Defense Authorization Act (NDAA), quietly passed in December 2011, which defines the entire US as a “battlefield.” This Act grants the federal government the explicit power to imprison civilians, including American citizens, indefinitely, with no charges or trial.

Whilst other countries have increased their policing powers, none holds a candle to the transformative legislation passed in the US.

In addition to legislation, the US Department of Homeland Security (DHS) has, in recent years, planned purchases of more than 1.6 billion rounds of hollow-point bullets and purchased thousands of tanks. This is especially significant, as the DHS does not take part in external warfare—its sole responsibility is to maintain domestic order.

So, whilst there can be no doubt that the US is preparing for internal strife of epic proportions, most of those who are presently speculating on who may be the proposed targets seem to be rather vague in their predictions.

Although it would be a given that the targets will be “the people,” it would seem very unlikely that the DHS might be targeting the American people as a whole, as opposed to particular groups. Might it be the gun-owners? Or, could it be the Wall Street occupiers or even the tea-partiers?

There is an inherent problem in the assumption that the DHS plans to target any one of these groups, or for that matter, all of them combined. The problem is that there are not enough of them to warrant such an extreme build-up of armaments.

Like it or not, the various theories do not hold up to scrutiny. Unless the DHS plans on conducting training exercises that are on a scale of a World War, they are preparing for a volume of literally tens of millions of people who would presumably take part in some form of domestic conflict.

The Patriot Act and its renewal and the NDAA were all passed by an overwhelming majority in the US Legislature. Clearly, American legislators foresee the possibility of a major conflict and have taken action to combat it. That would suggest that they are assuming that, in the not-too-distant future, socio-political and economic conditions in the US will be changing dramatically, affecting tens of millions of Americans, not just small fringe groups.

Could it be that Congress fears a much larger group?

It is safe to assume that readers of this publication believe that the US may be on its last legs in propping up its economy with monetised debt; that at some point, devaluation of the dollar will begin, QE will end, and the funds will simply not exist to pay for the many entitlements that political leaders have promised the voters. Just as some US cities are reneging on their entitlement promises, the federal government will find itself unable to pay. Social Security, Medicare, Medicaid, welfare, and a host of smaller funds will either dry up or be dramatically diminished.

If this were to happen, as seems a likely outcome of the present economic direction of the US, roughly half of all Americans would find themselves dramatically economically curtailed and would be unable to maintain their current standard of living. Many, in fact, would have no income whatever. Is it likely that they would be angry? Yes.

If so, their numbers would be very great indeed.

This does not cast in stone the idea that Americans will soon resort to revolution in retaliation to events that appear likely in the future. What it does indicate rather strongly is that the US Government appears to be readying itself for such an outcome.

The More Corrupt the State, the More Numerous the Laws

It’s crucial for your personal freedom to know the difference between committing a real crime and breaking the law.