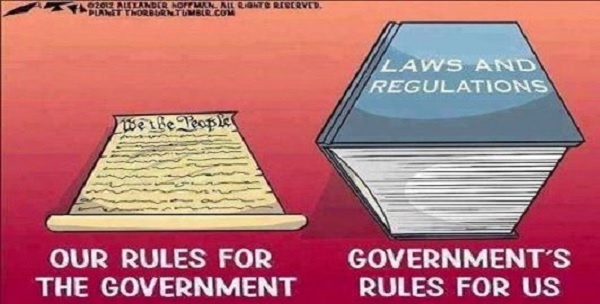 Today, I’m going to share one of the most important things I’ve learned traveling around the world: There’s a crucial difference between committing a real crime and breaking the law.

I’ve seen it firsthand in the Middle East as well as many other places.

The difference is huge and few people understand it.

While laws vary dramatically across countries, almost every country in the world universally considers real crimes immoral. A real crime involves harm or the threat of harm to person or property. Think murder, theft, or arson.

Virtually every government prohibits real crimes. Most also prohibit a lot of other things…

When someone breaks the law, it’s often not a real crime at all. He may have merely violated a particular government’s law without threatening or harming anyone or anything.

Keep in mind that the idea of a victimless crime is an oxymoron. If there is no victim, there is no real crime.

Insulting the Dear Leader in North Korea, being a woman who’s driving a car in Saudi Arabia, or possessing certain plants in the U.S. government all violate laws. But none of these activities harm or threaten people or property. They’re not real crimes. They simply violate the laws of certain governments.

Of course, I am not suggesting that anyone break the law anywhere, even if it wouldn’t harm people or property. As a practical matter, it’s foolhardy to violate any government’s laws while you’re within its reach. That is, unless you prefer the lifestyle of an outlaw or a martyr.

It would be risky to disparage the Dear Leader while in North Korea, or to possess an unapproved plant in the U.S., and so forth.

Distinguishing between real crimes (i.e., harming or threatening to harm people or property) and breaking the law is critical to your personal freedom. The next step is for you to minimize your exposure to arbitrary, make-believe “crimes” invented by your home government.

You can do this by diversifying internationally. That means moving some of your savings abroad in the form of physical gold to a safe jurisdiction, owning real estate in another country, opening foreign bank/brokerage accounts, and obtaining a second passport, among other things. Taking these steps will significantly dilute the power bureaucrats in your home country have over you.

This is what this publication is all about: maximizing your personal freedom and worldwide financial opportunities.

The more laws, regulations, and edicts your home government subjects you to, the more important it is to diversify internationally.

This problem is particularly obvious in the U.S., where every level of government is continually passing more laws…especially the federal government. There are so many vague, overly broad federal laws criminalizing mundane activities that it’s impossible for anyone to be 100% compliant.

Many people think felonies only consist of major crimes like robbery and murder. But that isn’t true. An ever-expanding mountain of laws and regulations has criminalized even the most mundane activities.

It’s not as hard to commit a felony as you might think. Many victimless “crimes” are felonies.

Today, there are thousands of federal crimes, and the number is constantly increasing. It brings to mind the words of the great Roman historian Tacitus: “The more corrupt the state, the more numerous the laws.”

Corruption can be defined as the taking of bribes of one type or another by officials in order to allow subjects to avoid taxes or regulations. Political corruption doesn’t, therefore, occur in totally free markets simply because there’s no taxation or regulation to avoid. Inevitably, and completely predictably, the more taxed and regulated a society is, the more necessarily corrupt it is.

Today in the U.S., the government won’t necessarily go after you if you break a law. After all, most everyone has technically broken some law. Instead, the government decides whom to go after and chooses which laws to enforce. A creative prosecutor can always find some crime to charge you with if he looks hard enough.

If you think it’s bad now, just wait until American politicians get even more financially desperate. Like most governments in financial trouble, we think the U.S. will keep choosing the easy option…money printing on a massive scale.

This is a huge threat to your financial security. Politicians are playing with fire and inviting a currency catastrophe. The socio-political consequences are likely to be even more severe than the financial ones.

Editor’s Note: This is a big reason why we think everyone should own some gold. Gold is the ultimate form of wealth insurance. It has preserved wealth through every kind of crisis imaginable. It will preserve wealth during the next crisis, too.

But, if you want to be truly “crisis-proof”, there is much more you can do…

We’ve put together a short video explaining the other essential and easy-to-follow steps you can start taking today.

The More Corrupt the State, the More Numerous the Laws

It’s crucial for your personal freedom to know the difference between committing a real crime and breaking the law.