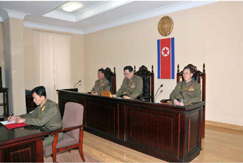 Though it seems farfetched, the prospect of being extradited to North Korea is a chilling thought.

Consider the thought experiment below and see if a similar scenario is as implausible as it initially sounds.

Suppose you are on vacation with your family in China, doing typical tourist things: checking out the Forbidden City, Tiananmen Square, and the Great Wall. However, about five years ago you had made a couple of viral YouTube videos poking fun and making jokes about the North Koreans—particularly their deceased Dear Leader Kim Jong-il. The North Koreans, however, were not amused at all. And despite years passing, they have not forgotten nor forgiven. Insulting the North Korean government and especially the Dear Leader is deemed a very serious “crime.”

The North Korean authorities have charged you with a crime and declared you a fugitive from justice—facing many years in prison. They also put out an international arrest warrant.

When they found out you had checked into a hotel in China—a country which they have good relations with—they sprang into action. An official request was made to extradite you from China to face trial in North Korea.

The Chinese, treaty-bound and respecting the wishes of their ally, oblige.

Then, at 2 in the morning, you're violently awakened as a squad of heavily armed Chinese police break into your hotel room, point loaded guns at you and your family, and haul you away in your pajamas. After some brief formalities in a Chinese kangaroo court, you're taken to a jet bound for Pyongyang, where you are promptly convicted by another kangaroo court and thrown into a North Korean prison. The end.

This made-up story is what the world could look like if the international norm of not extraditing people for political “crimes” continues to be eroded.

In other words, if a citizen of country X commits what's deemed a political crime in country Y and is then extradited while in country Z, it could become a common occurrence.

Obviously the story above is improbable presently—that is, unless we switch the names of the countries involved. Then it not only becomes a distinct possibility, but something that has recently happened.

More on that in a moment, but first some important context.

An extradition is the return of a fugitive charged with a specific crime to the country where he/she is charged. An extradition treaty is a legal mechanism that countries use to transfer people to another country.

(Editor's Note: See here for a list of countries without an extradition treaty with the US.)

Some offenses, such as those that involve a serious aggression against people or property (murder, theft, rape, fraud, etc.), are almost universally extraditable under most treaties.

In the past, offenses such as dodging military conscription, desertion, violating religion-based laws, tax evasion, treason, and espionage were internationally considered purely political crimes and were rarely extraditable.

Today however, it's a whole new ball game.

The international consensus of what constitutes a political crime is and has been changing. Its definition is shrinking—fewer and fewer offenses are considered political, which widens the latitude on what effectively could be an extraditable offense.

And it's the US which is leading the charge, as it pulls out all the stops to pursue its perceived political fugitives abroad.

One just has to look at the extreme measures—such as grounding the Bolivian president's plane—the US has taken in its (so far failed) attempts to extradite NSA whistleblower Edward Snowden, who's charged with espionage—a purely political crime.

But it's not just the political crime of espionage which has been transformed into an extraditable offense. Tax-related offenses have also become much more extraditable than they had been in the past.

It's no coincidence that some of the most bankrupt governments on earth—namely those in the EU and US—have been so determined on altering the international consensus on tax offenses. And they have been successful.

Don't expect other countries to offer much resistance, either. In fact, I would wager most governments would cheer such a change, even those that are not bankrupt.

Pinning bogus “tax evasion” charges on political opponents has long been a favorite tactic of repressive governments the world over. And with the change in international attitudes about tax offenses, these repressive tactics have been given a new breath of international legitimacy.

Anyway, back to the North Korea scenario outlined earlier. It may seem implausible at first, but it's closer to reality than many realize.

A citizen of country X commits what is deemed a political crime in country Y and is then extradited while in country Z.

This is in fact exactly what happened recently to Raoul Weil, a Swiss citizen who was the #3 executive at UBS.

Raoul had been charged by US authorities for allegedly helping Americans evade US taxes through Swiss bank accounts. An international warrant for his arrest was issued in early 2009.

Raoul is not a US citizen. His alleged crimes did not take place in the US, nor are they considered criminal offenses in his native Switzerland, where he continued to live freely despite the international arrest warrant.

However, Raoul recently went on vacation with his wife to Italy. After checking in to a hotel in Bologna, the couple had some unexpected guests—the Italian police—who come knocking at 2 in the morning. Raoul was promptly arrested, extradited, and is now awaiting trial in the US.

And as it's time to “eat the rich” in the US (and elsewhere), many have cheered Raoul's arrest and extradition—and many who probably don't understand that they're normalizing the act of extraditing those who commit political offenses. A disturbing, but expected, outcome.

Another potential indirect effect of the US’s aggressive pursuit of Raoul Weil, Edward Snowden, and other political criminals is that it could embolden other countries to do the same. This would make the world a smaller place for political refugees and could help chill dissent worldwide.

If we simply switched the names of the countries involved in Raoul's scenario, the US mainstream media and government might have taken a totally different view of the situation… underscoring its political and not criminal nature.

Take, for example, the case of Mikhail Khodorkovsky, a Russian oligarch and political rival to Russian president Vladimir Putin. Khodorkovsky was arrested and jailed on charges of tax evasion. The US, hypocritically, considered his case not to be a criminal issue, but one of so-called human rights, and deemed Khodorkovsky a political prisoner.

Let's see if the Russians return the favor and raise a “human rights” stink about Raoul Weil.

In any event, simply swapping the names of the countries involved doesn't change the underlying nature of a political crime where no aggression has been done to any person or property.

Raoul Weil's situation is really not entirely that different than, say, an American who commits a political offense (from the perspective of the North Korean authorities) by insulting the North Korean government. The main difference is that North Korea doesn't have the same international clout as the US does and therefore isn't as successful in shaping the narrative and pursuing its political criminals abroad.

As a matter of practicality, it's generally very unwise to violate any country's laws—including political offenses that one personally disapproves of—while within reach of that government.

Just as it would be unadvisable to insult the Dear Leader while in North Korea, it is similarly unadvisable to commit a political offense in other jurisdictions while you are within reach of their governments. That is, unless you prefer the lifestyle of an outlaw or a martyr.

In a world where political risk is drastically increasing—especially in countries with deteriorating fiscal situations—it is absolutely crucial that you take steps to insure yourself against this risk. Internationally diversifying some aspects of your life will provide you with just that kind of insurance. This can include obtaining a second passport, or moving some of your savings abroad in some form (such physical gold in a private foreign vault), and diversifying your digital presence with offshore email accounts, among other measures. You can find trusted and detailed guidance on this critically important topic from Casey Research by clicking here.

The Best Countries for Your Escape Plan

Suppose the most powerful intelligence agencies on the planet were hunting you. Where would you go?

This is what the world could look like if the international norm of not extraditing people for political “crimes” continues to be eroded.

Where You Register Your Domain Name May Land You In Jail

A 23-year old university student who lives in the United Kingdom who has never been to the US and runs a website with servers based in Sweden is facing extradition to the US for copyright infringement. How in the world could the United States government make a case against him, and enforce its laws against a foreign citizen like this? Because he used a .com domain name.