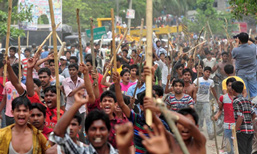 This image represents the third greatest fear amongst those considering expatriation—a lack of acceptance from the native people. Although the image may be exaggerated, the fear is becoming increasingly prominent amongst Americans in particular—the fear that they will be hated because of where they came from. This fear has several distinct facets.

“What do you think will happen—when all these Americans start showing up in numbers and taking the jobs from locals?”

This fear is a very common one. It may or may not be justified, depending upon various criteria.

First, is the market already flooded with workers in your category? If so, maybe the target country is a poor choice.

However, as an example of a success story, in my twenties, I moved to a country where a bank collapse virtually eliminated jobs in the industry I had intended to enter. Still, I wanted to remain, and I quickly realised that another industry, in which I also had skills, was completely untapped. I became the first in my field and was extremely welcomed and valued.

Therefore flexibility is a great asset to those expatriating. When seeking a target country, seek one where you have skills that are needed. Also remember that, often, skills that were common at home may be rare and quite valued in other countries.

Second, seek a country where there is prosperity. In such countries as Chile, the Cayman Islands, and Norway, growth is taking place faster than the locals can fill the jobs (or, in some cases, gain the skills required for those jobs). In most such cases, there will be some locals who might resent the fact that you are needed, but the vast majority will recognise that your presence as a skilled person will add value to their lives. You will unquestionably be valued by your potential employer and other businesspeople.

Your acceptance amongst the general population will be more dependent upon how you treat them—a skilled newcomer tends to gain welcome quickly if he demonstrates a measure of humility.

This is an individual call. Some people have very limited language talents and are unlikely to survive, if within their first year they need to learn Spanish or Mandarin. For others, it's just a part of the new experience—broadening their knowledge.

Either way, here's a tip on language: English is spoken in most countries today, particularly in cities. In restaurants and shops, you are most likely to find some people who speak English. You'll have greater difficulty in banks and government offices, where the staff are not only likely to be less knowledgeable, but less motivated to be accommodating.

With the help of an electronic translator, you can function immediately most anywhere. From that point on, it will be a question of your ability to learn the new language.

However, none of the above applies should the main language of your target country be English, which is true of all of the many former British colonies.

This concern could apply to anyone, from any country, going to a new country, but the strongest fear seems to come from Americans. As one International Man reader states,

“If there is one country in the world for whom sympathy will not be extended—it will be the US.”

As a non-American and one who has met literally thousands of expatriates seeking a new life, I can assure the reader that this is largely untrue. There are the odd hot-spots where Americans do unquestionably raise an eyebrow, but people in most countries are more inclined to see who you prove to be as an individual.

I confess to being cautious regarding new arrivals from America, as the “Ugly American” image does unquestionably exist. However, those Americans who display relative humility and sincerity tend to gain acceptance quickly.

There are, however, other difficulties for Americans, such as opening a bank account. If you attempt to open an account in a foreign bank, the first question will be, “Are you a US citizen or do you have a US passport?” If you then produce any passport other than a US passport, they will be relieved and begin the paperwork. However, if you do produce a US passport, they may tell you that there will be more paperwork to do, or in many cases, that they do not desire your business at all. (If the latter, they will not blame you for this, they will, in fact, sympathise with you.)

Many of those who are presently expatriating are moving from the US, Canada, the UK, etc. and are considering a move to a country that may be a bit more laid-back. They understandably fear that they may be too abrupt or citified for the people they will be meeting and working with.

This concern is quite justified. A Londoner or a New Yorker may well have difficulty winding down, in order to gain acceptance.

Someone who is from New York may become impatient in an Argentine restaurant when his chivito is not delivered as quickly as his Reuben might have been in a Manhattan deli. If so, it would not help the speed of delivery at all to say, “Hey, Buddy, I haven't got all day—where's that steak sandwich?”

Equally, a Londoner would not endear himself to a Panamanian bar owner if he were to complain, “This Corona isn't proper beer at all. Don't you have anything decent?”

I once rejected a job applicant from Texas, when he promised me, “You just tell all these little local boys that there's a new sheriff in town, and I'll show you how it's done.”

That approach is exactly what a new employer does not want to hear. Even if the new hard-charger can deliver on his belief in his abilities, he would damage existing workplace relationships, thus damaging the business as a whole.

I have, over the decades, employed hundreds of people from other countries. Invariably, I've advised them that their manner would be the greatest deciding factor of their acceptance. Humility and sincerity are generally all that is needed to gain acceptance. I did once interview an applicant who said, “I ain't kissin' up to nobody!” I advised him that that was not what was required—only that he not elevate himself above the other staff. However, the chip on his shoulder did not win him the job.

One final tip: Many readers have voiced their concern that, as the great exodus from the First World unfolds, those doors that presently remain open may slam shut when target countries realise that a flood of humanity may be coming their way. This is a very real possibility.

This does not at all signify a distaste for any particular nationality, but rather a fear of an overwhelming influx of residents. As such, the reader, if he is considering internationalising, would be well-advised to begin the process as soon as possible. Those who delay may well find that the welcome mat has been removed and his options have diminished.