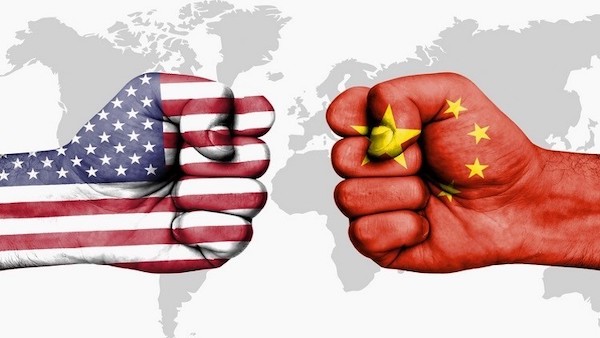 The Chinese came from nothing; only 40 years ago, they had nothing but a billion impoverished peasants. No money. No technology. No power. Today, they’re on par with the United States. But, if this trend continues – which it will – their economy will be triple the size of the US economy in 20 years.

Not just a trade war, but a shooting war with the Chinese seems inevitable. Because when tensions build up between states they eventually fight with each other. China is the major rising power. It’s got four times the US population, it’s soon going to be more economically powerful, and it’s going to reach military parity. It’s of a different culture than the US. The US government may figure it’s best to take them out while the balance still favors them. It’s a bit like the situation was with the USSR in the ’80s. They could see they were going into decline, and some Soviet generals figured it was “now or never” for a successful war. Fortunately they collapsed first.

The last thing that we need is a war with the Chinese. But if something that’s been called the Thucydides Trap is valid – and I think it is – then it’s highly likely. It refers to the Peloponnesian War between Athens and Sparta, at the end of 5th century BC. The Trap is sprung when a reigning power strikes out at the advancing power while they still have a chance of winning.

The American military thinks that a shooting war is inevitable. And it probably is. Why? Well, 5,000 years of history teaches us that it’s better to start a war when you’re more powerful than your enemy rather than wait until they’re more powerful than you. It’s always been this way. The Golden Rule of statecraft is: Do unto others – but do it first. It’s a very dangerous situation.

The US may do something stupid, like fabricate an incident, and launch a preemptive strike against China. Or perhaps things just get out of control, as they did in World War I.

It would make about as much sense as the Peloponnesian War, or World War I. But these things can take on a life of their own.

The wars between European powers were bad enough. But when the US fought Japan it actually turned into a race war. What happened in the Pacific was far uglier than what happened in Europe. There were basically no prisoners taken.

The next big war – as opposed to a sport war, like those in the Middle East – is likely to be with China. That could make World War II look trivial by comparison.

The Next Financial Crisis Will Be “The Big One”

Nobody has a crystal ball, but I think you can see the dominos lining up. Will this be the big one, or will it just be another recession – an inconvenience, followed by even bigger bubbles? It’s a question of odds. And the more dominos that lineup – the political, economic, social, demographic, military, and cultural dominos – the more logical that this next one is going to be much bigger than what happened in 2008.

That’s why I use the analogy of 2007-2010 being the leading edge of this hurricane. We’ve had a very big eye of the storm because of absolutely massive money printing by central banks all over the world. It’s had the effect of throwing oil on the water.

When we go into the trailing edge of this hurricane, it’s going to be much worse, much different, and much longer lasting than the unpleasantness of 2007-2010. Why? Because that was caused by inflation and debt. We’ve had vastly more of that over the last decade to paper over the problems. I think we’re re-entering the hurricane now.

I’m not, however, looking forward to an economic crisis, or a political crisis. Those can have major consequences. And I’m absolutely not looking forward to a cultural crisis, which is by far the most serious kind. Unfortunately, that is what we’re facing at this point.

Let’s just hope that what’s coming this time, over the next few years, is limited to a financial crisis. But I don’t expect that’s the case. I think it’s going to be economic, political, and cultural as well.

Editor’s Note: If the trade war between China and the US turns into a shooting war, a complete economic collapse is sure to follow. That’s why we’re sharing our field guide to Surviving and Thriving During an Economic Collapse. Click here to download your free PDF copy now.