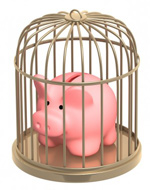 (Click here for part 1, where I discuss what capitals controls are, as well as why and how they are imposed.)

I think it’s a near inevitability that at some point the US will again enact official capital controls.

While the US doesn’t have explicit capital controls right now, I believe that the onerous reporting requirements of foreign financial assets backed up by truly draconian penalties, combined with measures like the burdensome FATCA law, amount to an indirect form of capital controls.

Rather than comply with FATCA, many if not most foreign banks simply show Americans the “unwelcome mat” rather than deal with the extra and costly regulations that come from having them as customers. This severely limits the options available, but does not shut the window completely.

This momentum is clearly not positive. It’s becoming more obvious that the US government is getting all its ducks in a row in case it ever wants to impose capital controls at some point in the future.

Capital controls are nothing new for the US. In 1933 under Executive Order 6102, FDR forced Americans to turn in their gold at the unfavorable “official” government price. That was a form of capital controls. So too was the subsequent period of prohibition of personal gold bullion ownership that lasted until 1974.

With no conceivable material slowdown (let alone reversal) in the growth of US government spending, debt, and currency creation, I believe it’s just a matter of time until a tipping point will be reached and capital controls will be presented as the solution.

It could all happen in an instant. All it would take would be the stroke of Obama’s pen with a new executive order.

The breakdown of the petrodollar system and the loss of the dollar’s role as the world’s premier reserve currency will probably be the triggering event.

The critical point here is that you must be prepared beforehand in order to effectively protect yourself.

What Could Happen if You’re Too Late

Capital controls are almost always a prelude to something bad. It could be a currency devaluation, a so-called “stability levy,” a bail-in, or something else. Whatever the government and mainstream media labels it, the end result will be the same: a theft of purchasing power.

The remainder that isn’t stolen is then trapped for future shearings.

That could make it hard or impossible to pay for medical care abroad—an increasingly necessary move for many, as the full destructive effects of Obamacare begin to be felt.

In addition to the direct damage, there is of course indirect damage. Capital controls permit an out-of-control government to better insulate itself from market forces that would otherwise help restrain its destructive policies. Capital controls also hurt businesses and pump further politically caused distortions into the economy. On the flip side, such distortions can create profitable speculative opportunities for astute crisis investors.

What You Can Do About It

You can preempt capital controls and protect yourself by internationalizing your savings. Moving your money offshore ensures that you won’t get penned for the shearing that always follows capital controls. You will have protected yourself from the “stability levy,” currency devaluation, or whatever form of wealth confiscation the government chooses to implement.

Doug Casey and I met a few people in Cyprus who shrewdly saw the writing on the wall and chose to move their money outside of the country before the crisis. They were thus spared from the confiscatory bail-in and free to use their money without worrying about the restrictive capital controls that forced everyone else to keep their money on the island.

Timing is the essential ingredient. I cannot emphasize enough how important it is to be prepared. A year or two early is always better than one day too late.

You will never know precisely when the day of reckoning will come… until it’s too late. And it will likely come as a surprise in order to ensure its effectiveness—like the sneak attack on Cypriot bank depositors did on that Saturday morning.

Nobody knows what the trigger will be for the US nor when it will be. We could wake up one morning to find out that the Russians and Chinese have decided to dump their Treasuries, causing a run on the dollar, and the reaction of the US government is to impose capital controls. There are many possibilities.

Even if capital controls are never imposed, you are no worse off for internationalizing your savings. In all likelihood, you’d be better off. You could sleep better at night knowing that you have insured your savings by diversifying your political risk. Also, many offshore banks are better capitalized and otherwise sounder than any bank you would find in your home country—at least if you live in the US or the EU.

But it’s not just offshore banks. Foreign real estate and storing your physical gold abroad are other options that will also protect you from capital controls and the wealth confiscation that always follows. These are the kinds of topics and actionable strategies that we cover in great detail in our Going Global publication. If you haven’t already, I’d recommend that you check it out while the window of opportunity is still open.