You are technically a slave when 100% of the fruits of your labor is taxed or otherwise confiscated by force. 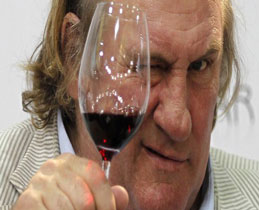 For some people in France, it is dangerously approaching that threshold with proposals to raise the income tax to 75% from 41% for earners of more than 1 million euros. And that's not even putting the 20% VAT tax or the myriad of other taxes into consideration.

Though the 75% income tax proposal has been set back by France's high court, there is little doubt that the politicians behind it will eventually succeed.

There should also be no surprise that desperate governments are implementing desperate measures, and that affected French citizens don't like to be treated as milk-cows, to be squeezed for every drop.

Gerard Depardieu, a prominent actor, is one such Frenchman. Gerard claims he has paid over $190 million in taxes to the French government during his lifetime, and the proposed drastic increase in income tax was the final straw. He recently renounced his French citizenship and became a resident of Belgium.

That didn't help him much though.

This is where Gerard's old buddy Vladimir Putin steps in. Gerard is relatively well-known in Russia due to his roles in Russian commercials and for depicting Russian historical figures, like Rasputin.

Putin personally approved the citizenship request for Gerard that will grant him a Russian passport and a ticket out of French tax slavery – Russia has a flat income tax of 13% for everyone.

Gerard Depardieu is literally the concept of “capital flight” personified.

It appears Russia is onto something and will continue to woo wealthy Western Europeans away from their tax plantations.

Following the news that Putin had granted Gerard Russian citizenship, Russian Deputy Prime Minister Dmitry Rogozin stated on his Twitter page that “In the West people have very poor knowledge of the Russian tax system but when they learn about it we can expect the mass migration of wealthy Europeans to Russia.”

Whether that actually happens is another thing.

But it is very likely that others will follow Gerard's lead (maybe not to Russia though) and renounce their citizenship as bankrupt governments worldwide institute similar measures.

High profile cases like Gerard Depardieu's serve as a good wakeup call, both to governments that may want to implement similar measures and to those who live under the thumb of such governments. It also shows the nature of political risk and how international diversification can help protect you from it.

You certainly don't have to be a millionaire, a movie star, or Vladimir Putin's buddy; there are many middle-class and low cost solutions that anyone can implement to diversify internationally.

International Man is here to give you the best and most current information possible, so that you can take practical action with specific and timely information on obtaining multiple passports, establishing second domiciles or residencies, spreading your savings and your earning power across multiple jurisdictions, and maximizing your privacy.